Sunless Sea has emerged from Early Access, and I've been having an absolute blast playing it. Specifically, a cannonball blast to my face, knocking me overboard and drowning beneath the waves as tentacles drag me screaming into the slimy depths. Still, a blast nonetheless!

I haven't touched the game since the earliest part of the Early Access phase; I was impressed by what I saw, but also frustrated by some of the mechanics, and decided that I would take off my developer hat and wear my player hat and wait for it to emerge as a more fully-formed source of fun. It was a longer wait than I expected; the game's release was pushed back several months, as part of the normal vagaries of game development. Fortunately, as an independent studio Failbetter had some leeway in this regards, and they did a fantastic job at communicating with their backers throughout, explaining in what specific ways the delay would result in a better game. From what I can tell, the biggest overall change was to combat, which was completely redesigned from the ground up, changing it from a disconnected vaguely turn-based experience into a dynamic and integrated real-time system. That's meant that I had to unlearn much of the little I already knew, but after getting over the hump I'm really enjoying the new feel of the game, which has a lot more tension and strategy and less repetition.

I'll probably do a proper summary after I one day beat the game, but I figured I'd start off by sharing some of my own personal tips after a weekend of play, featuring five captains blown to smithereens.


The game emphasizes this over and over from the start. At first I thought that it was just a bit of gentle encouragement - "Don't worry if things go wrong! Keep playing!" - but it's actually a fundamental piece of the game. Basically, instead of being too focused on an individual captain's success, you should be looking towards your overall lineage. Future captains can inherit some of each former captain's gains, and accumulate to it, before passing the result on to the next generation. 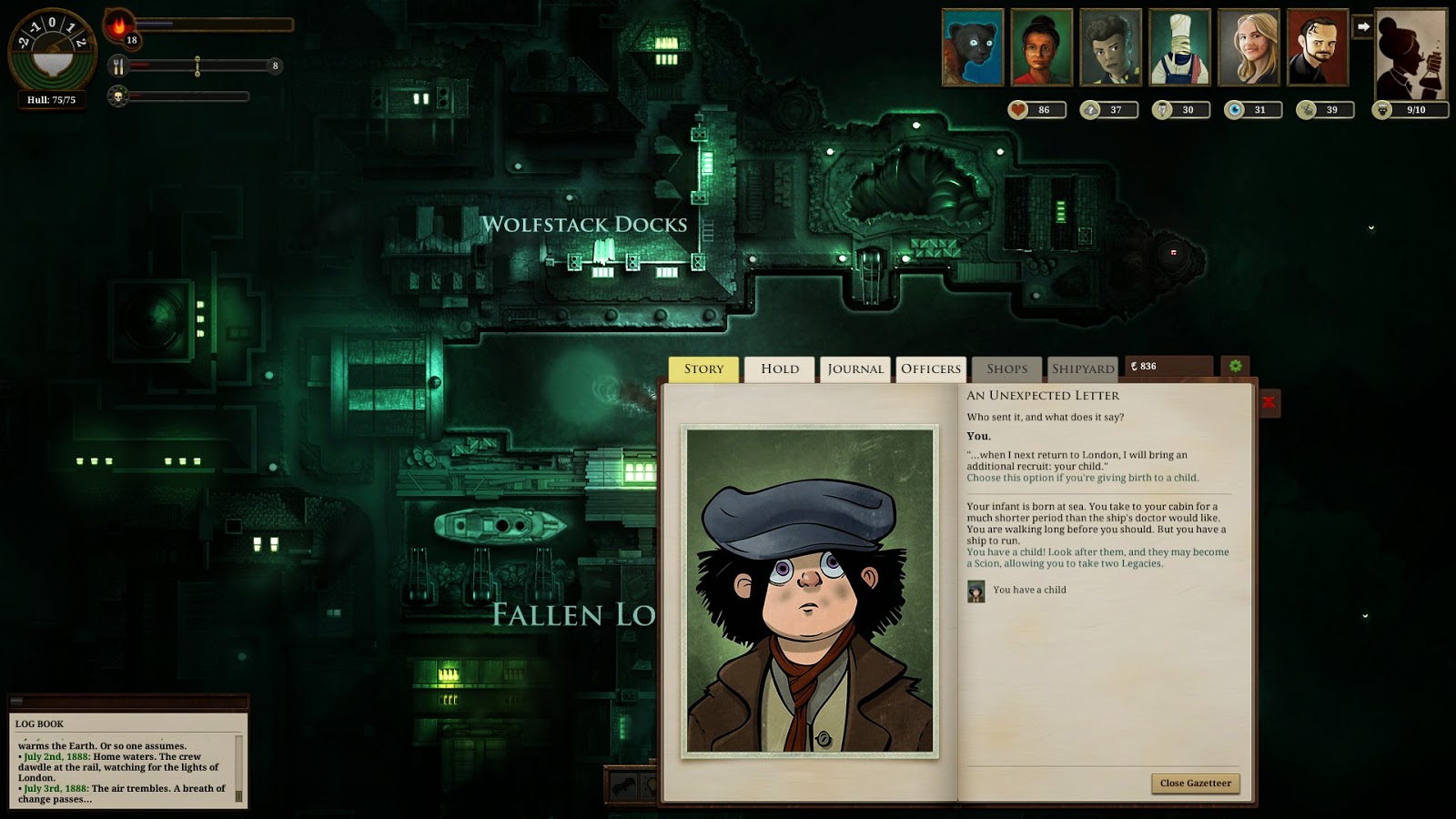 There's a rhythm to this that you'll fall into after a while. At the start of each game, you have access to some nice and easy ways to gain money, dispose of Terror, etc. As the game progresses, those easy sources begin to dry up, which in turn will push you to venture further from home and into more dangerous waters. Eventually, the captain will die. The next captain will hold on to some piece of their legacy, but will also re-gain access to all of those early easy gains. And, as you play the game more, you'll learn more of those sources. So your subsequent games will start you off on a higher level, in addition to re-acquiring all the stuff your earlier captain did.

Basically: Have fun, don't worry about dying, and stay on Invictus. I may eventually switch to merciful mode once I'm ready to make a strong play for the endgame, but I suspect it's actually much more difficult to win a first game by reloading saves than it will be to eventually win a tenth game with permadeath.


This is somewhat in keeping with the former point. Your first captain will die, and probably quickly. You'll see some options for what to pass on to your next captain: basically, half of one of your main stats and one other bonus (a chart, an officer, a gun, or half of your current money). On your second captain, then, be thinking about what you'd like to pass on to your third captain, and try to focus on that. 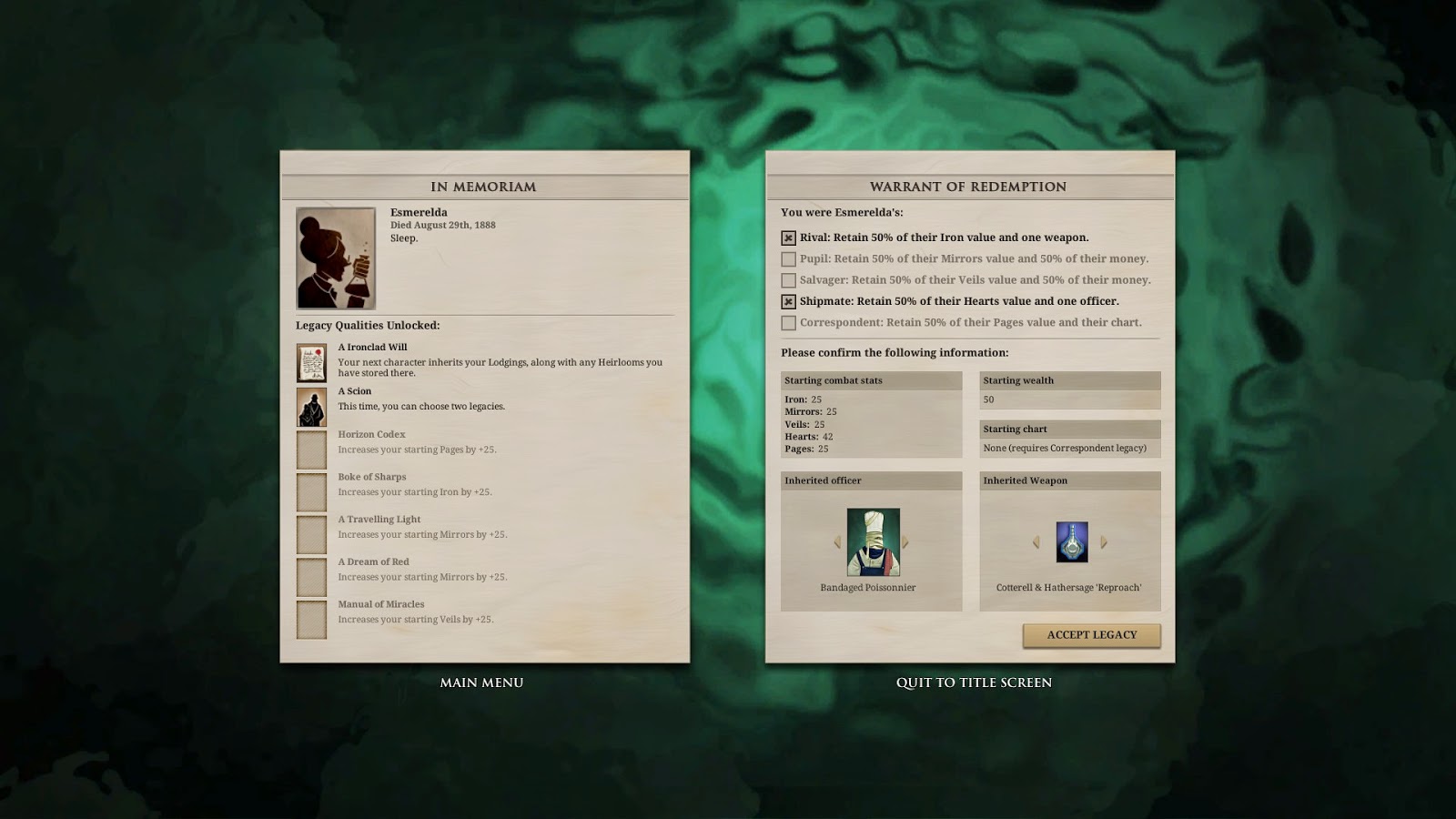 In my case, I initially chose to pass on my Chart and half my Pages. In theory, this seems like a sound idea: it takes a while to find where things are, and knowing this will let you more efficiently run early quests. But, as I learned, keeping the Chart also means that you won't gain any Fragments for discovering places you already know, which removes the best source of Secrets in the game. So, I decided, instead I would focus on passing forward my Hearts and an Officer. Now, I focus on bumping up my Hearts as high as possible, since that's the stat I know I'll be passing forwards.


I still definitely have a ways to go in this regard, but I can tell you a few things that definitely DON'T work. Don't try to flee bats or crabs if you have the starter engine. It was embarrassing to lose multiple captains in sight of London due to dumb animals. I was already damaged and didn't want to engage them, but they're fast enough to catch up to you. I should have turned to face them and taken two hits while getting off the two shots needed to kill them; instead I took five hits while running and sank. Never again! 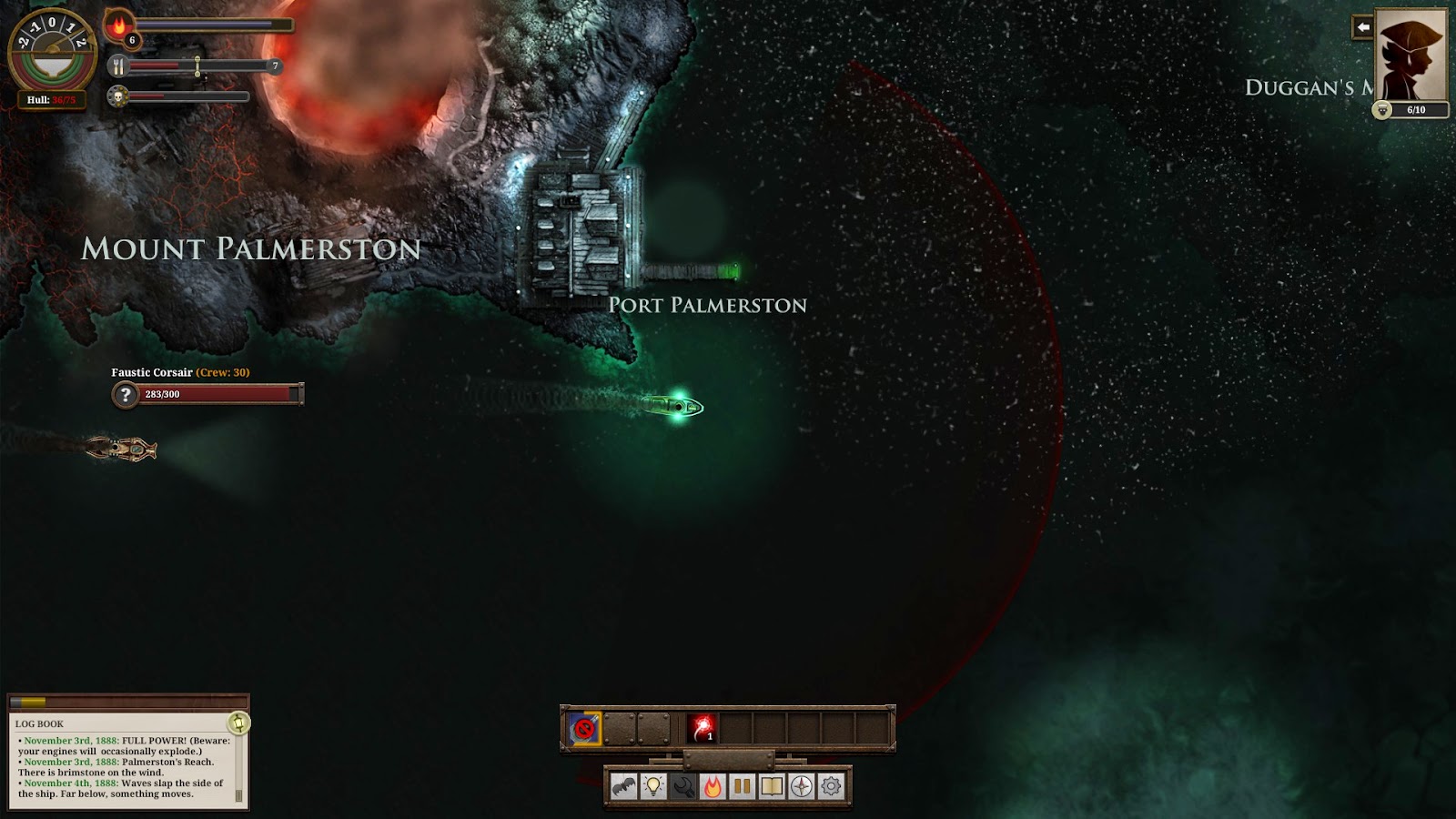 On the other hand, if you'd like to avoid a fight, it's usually fairly straightforward: before they spot you, turn off your light, and try to stay out of range of their lamp. It actually isn't that hard. The downside, of course, is that your Terror can rapidly climb while you're creeping along in the dark. As I've come to discover, though, Terror is much less of a threat now than it was in the Early Access days. It seems to tick up more slowly in general, and there are more good options available for dealing with it. Even while using my go-dark strategy while avoiding combat, I have never once returned to London with terror over 50 in all of my many doomed games.


Sunless Sea really isn't a trading game, and if you try to play it like one, you won't have fun. Almost every cargo run will result in a loss; the most profitable options, like ferrying wine to Godfall, will only return around 9 echoes per hold slot, and only are available for a limited time. Trade is a decent way to squeeze a few extra echoes out of an already-planned trip, but shouldn't be your primary goal.

What to do instead? Personally I'm mostly driven by my Admiralty commissions, each of which pays a nice 150 Echoes. Pursuing other quests can ultimately be very profitable, although it usually takes several stages; these might be originated by people in London, although the best quests tend to be the ones that start on the islands. And pursuing your officers' questlines can lead to great items or character upgrades. Basically, do whatever the game is offering that looks most fun, and you'll probably find yourself making some decent money from it.


At least in the early game, where I have been playing, one of the best sources of income is acquiring Port Reports. So, whenever you are going on a journey to a destination, try to make your route a circle or a square, rather than a line out and back.

As a concrete example: support you need to go to Mount Palmerston in the northeast of London. If you travel straight there and back, you will probably get about 180 Echoes (150 for the Strategic Information, 30 for the Port Report). You'll also have burnt a lot of fuel and supplies, though, leaving you with minimal profit. Instead, consider traveling north along the coast to Venderbight, Wither, then east to Codex and Mount Palmerston, then south to Gaider's Mourn before returning to London. This will give you a total of five Port Reports, each worth between 5-50 Echoes (with 20-30 being most common). Additionally, in one of the best additions since Early Access, each report (regardless of distance) will grant 1 free Fuel, worth another 10 Echoes. And the first time you turn in any Report for a given Port, you will get 1 Admiralty's Favor, which is worth about 25 Echoes in fuel or repairs. Altogether, then, you may end up with about 330 Echoes' worth of rewards in that circuit. 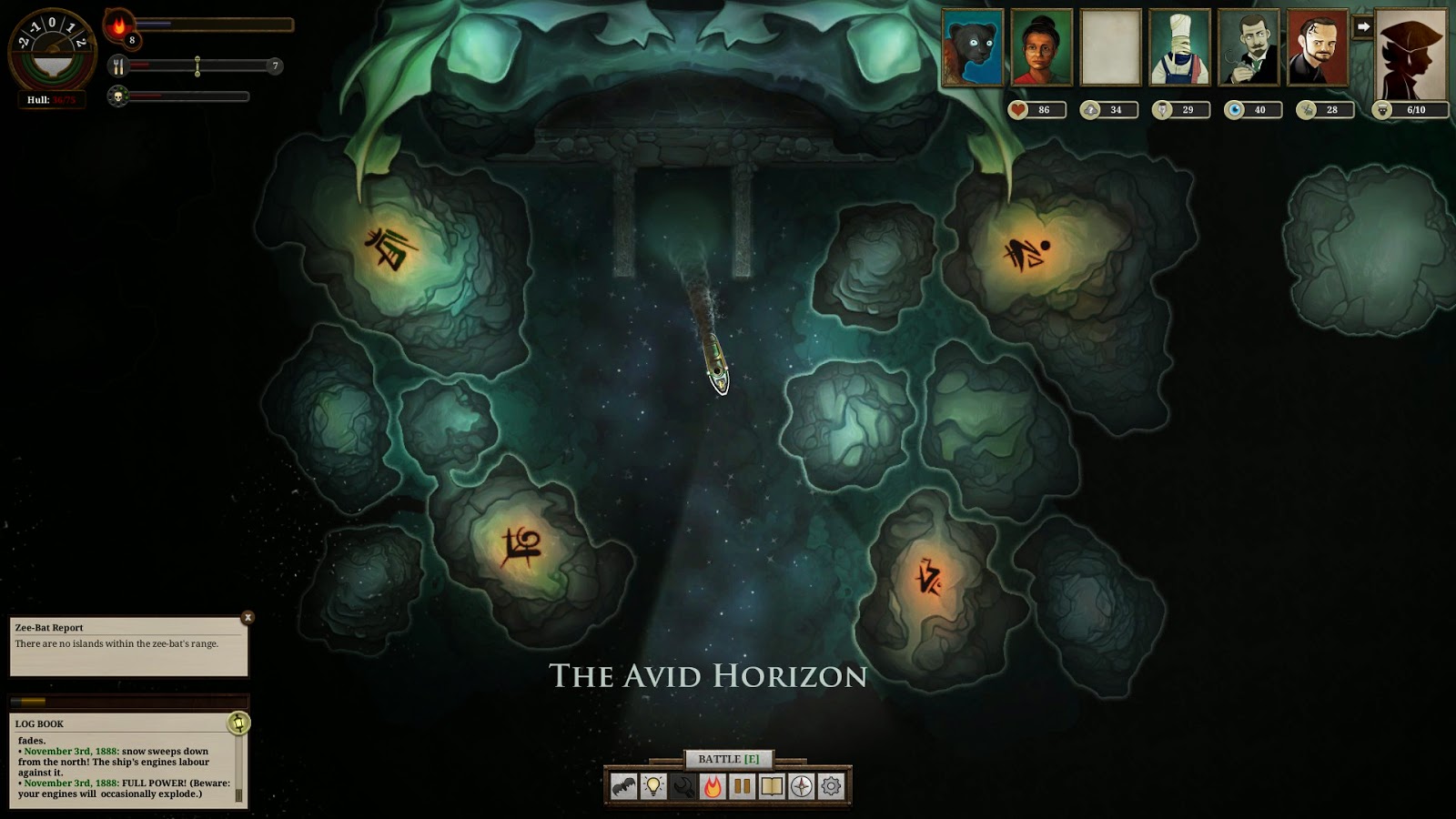 Of course, this does require traveling longer, but not by too much. Traveling to Mount Palmerston and back would take 2√2x distance; assuming your circuit is roughly a square, traveling that would take 4x. So, your longer route takes about 40% longer, but earns 80% more profit. Furthermore, you'll be playing the "Something awaits you in port" stories along the way, which in turn will provide additional profits and the start of still more questlines.

That's it for now!


It's definitely been a process of ups and downs for me - I was elated to recently unlock a Scion legacy, which practically doubles the resources I can pass on to the next generation, only to have it snatched away from me after a single unwise decision brought a curse down upon me. Still, like all of the best roguelikes, every time I have a setback I learn something concrete that I can apply to my future voyages. The picture grows clearer, I grow wiser, and I learn how to fail better with each successive game.