We Are Totally Normal

(I was tempted to title this post "Love in the Time of Coronavirus", but a Google search instantly established that, uh, it's been done.)
As I keep muttering to myself while pacing back and forth in my living room, "The government-mandated shelter-in-place order is a great opportunity to get caught up on reading!" My main reading project at the moment is my long-anticipated "Capital and Ideology". Thanks to the indefinite closure of the county library system, it looks like I may end up having three months or so to make my way through this 1000+ page tome. Unfortunately, it isn't exactly light reading. One of countless ironies of this period is that while I feel like I ought to have plenty of time to read things, my actual attention span has been badly fragmented, so wending my way through thousands of years' worth of interwoven economic, social and political history is, uh, taking a while.
Which is one of many reasons why I was relieved when my pre-ordered copy of We Are Totally Normal landed in my mailbox last week. This young-adult novel weighs in at a much more palatable 200+ pages, and its tales of high-school drama and early loves are resonating a lot more with me now than the evolution of trifunctional societies. 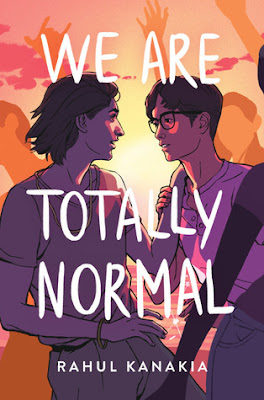 He just wanted to be loved. Or not even that. Actually that's the crazy thing - it's hard to feel loved. What really feels good is when somebody else is willing to accept your love. He was walking around with all this love in his pockets and nobody to spend it on.

That really resonates with me. Nandan can sometimes get so caught up in his capers and schemes that he doesn't see what's in front of him, but he can also be incredibly perceptive and empathetic.
I don't read many YA novels, and I'm not sure how much of the youth dialogue is from how kids today actually talk, and how much is based on what they read. The word that keeps giving me pause is "LOL". Do people actually say "Ell oh ell" now? Or "Loll"? Or is it an idiomatic replacement for "He laughed," much as earlier generations of novels might have written "Ha!"? I am a dinosaur.
There is really awesome, specific grounding in the Bay Area. More specifically in the stretch around Los Gatos and along Highway 17 into Santa Cruz. I used to live and work in that area, and I loved all the accurate details that get mentioned in passing like the crashed cars off of Skyline. Stuff like this isn't explained within the book but is instantly recognizable to locals, and wonderfully connects the novel to our time and place.
Overall I think that We Are Totally Normal is a warmer and more heartfelt book than Enter Title Here. ETH had a more shocking and outrageously funny energy, while WATN has more lovable characters. I'd like to personally spend time with most of the people in this book. And that's not just the quarantine talking!
Posted by Christopher Charles Horatio Xavier King III, Esq. at 8:20 PM