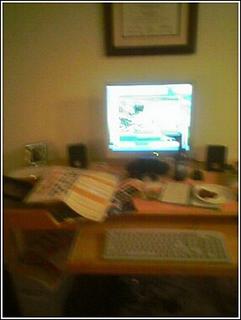 What a night! I've made sure to take little mini-breaks to keep from getting bedsores, but still, this is the longest marathon session I've had since San Andreas came out. How good is this game? Good enough so far that I'm planning on devoting my weekend to it. It's obviously too soon to tell for sure what its long-term viability will be, but my early response is one of optimism.

I'm seriously considering picking up a new graphics card. The game runs just fine right now, but there are some annoying graphical stutters and I'm not seeing any of the pretty animations. If you want some info on what graphics cards to consider, the fine folks at CivFanatics are putting together a good list at http://forums.civfanatics.com/showthread.php?t=133278. What I'm learning is that, while T&L is required for the game, the hip new thing is pixel shaders. I'm guessing that this is contributing to the audio choppiness in the game; my theory is that the CPU needs to perform these calculations which is interrupting it from playing the music. Speculation on the boards appears to support me in this.

Right now I'm approaching the year 1000AD. Here are some random thoughts/comments on my game so far:
OK, more later, but I'm really tired and have a long day ahead of me tomorrow. Take care, I'll talk with you later. :-)
Posted by Christopher Charles Horatio Xavier King III, Esq. at 11:35 PM