AD
Looks like the Arrested Development folks don't believe they'll be surviving; the finale really does feel like a series' end. In a way that's nice; it feels much better when a series can wrap everything up neatly, and means I'll be able to watch my DVDs without the ache I always feel at the end of "Objects in Space." It'll be a pleasant surprise if they make it to Showtime, and there's definitely plenty of material left to work with, but even in that scenario I wouldn't be shocked if there were major shifts in the plotline and/or the cast.

I was pleased by the incredible breadth of the last four episodes. Oh, Major Spoilers. Based on the advance publicity I'd sort of thought that all four episodes would be about Nellie Bluth, when she really just got one (and very brief references in the rest). The material was fantastic across the board, bringing back many of my favorite elements (Franklin, G-M's slow burn, and more), filled with great jokes (Tim's post has some highlights, scroll down about halfway), and providing a startling number of conclusions. Great times all around. This has always been a show that rewards repeat viewings, and I'm sure these four episodes will get plenty.

H: MD
House is still fun. I feel like it constantly skirts the edge of soap opera territory, but so far it has remained above water. The season-spanning Stacy romance arc didn't feel like emotional manipulation; at the beginning it really dug down into the core of how House got to be this way, its middle was a moving glimpse at House's analytical mind trying to "solve" the Stacy puzzle, and the conclusion was a heartbreaking reset button that reaffirmed Greg's essential masochism. My favorite bit from this whole arc was when Greg and Stacy share a hotel room, and he gets called away to consult on the case. Watching his mind immediately jump on the problem to the exclusion of the woman lying on the bed crystallized for me the way he ticks.

There have been several innovations since the series began that are helping it along. One big one is multi-episode arcs, which give the story greater stability; the Volger arc is still my favorite, but the Stacy arc and the Foreman In Charge one have been good as well. Another one is House's motorcycle; I never get tired of seeing that. And while it was there from the beginning, Wilson and House's friendship is one of my favorite elements of the show; it rings very true to me.

I feel like, ultimately, the show lives or dies on its dialog, and the script writers are still on fire. House gets all the good lines, and more than half of them are zingers. I can't help but wonder if Hugh Laurie contributes to the writing at all; he definitely has the background to do so.

Oh, and I want to see Stephen Fry guest star. Let's have the man with two limps!

L
Lost is cool. Now that we're heading into sweeps season there will probably be more crazy stunts and revelations. I'm honestly not quite as excited by this show as I was last season, but it would've been hard for them to keep raising the bar; I'm satisfied for this to be a consistently impressive show.

Pat hates Ana-Lucia with a passion. I might dislike her ordinarily, but the vehemence of his opposition makes me watch the show and think, "She's not THAT bad." I've complained before about the show's lack of villains, and honestly nothing would please me more than to see her emerge as a truly evil person. But for now the show's writers are doing their typical absolution-by-explanation thing and showing her as a much more sympathetic character.

I'm really excited by the Mr. Eko - Locke dynamic. Not sure yet what direction it'll go in. There have been a few times before when I felt like the series was setting up an archetypal division: Shore (Sayeed) versus Cave (Jack), Order (Jack) versus Chaos (Sawyer), Pacifism (Jack) versus Violence (Ana-Lucia), Rationalism (Jack) versus Spirituality (Locke). Jack's been at the center of all of these, but if this new dynamic (I'm thinking Orthodoxy [Mr. Eko] versus Mysticism [Locke]) takes off, it'll be a major sign that the show has moved beyond "Well, What Does Jack Think?" mode.

I'm sorta torn on the extra revelations we've had lately: black mist, The Others. I think it's inevitable we would feel let down when we actually see the Thing in the jungle; though it is cool, it's almost a shame to ground it in reality as a specific entity with a certain appearance. It felt better when it existed ony in the terrified faces of those who confronted it. That said, it would have felt contrived if they went the whole series without showing it, and I do appreciate the fact that it isn't a derganged giraffe or anything.

Current favorite characters: Mr. Eko and Locke. Ones I like but have seen far too little of lately: Sayeed. Used to be my favorite but have grown increasingly shrill and I think they're being set up to get killed off this season: Charlie. Most want to know more: the psychologist from the tail section. Most improved: Jin. Honestly not that sad they're dead, and in fact, if you'd asked me after the third episode first season to pick two characters to die, I would have chosen them: Boone and Shannon.

TCRThe Colbert Report: I feel kind of like this show is my baby, though obviously I'm far from the only person who enjoys it. As I've said before I wasn't expecting this to last long and I'm delighted to have been proven wrong. The show still has some hiccups but it's getting better on every front; even the interviews are now generally good.

This show really thrives on ego-building, and Stephen recognizes that. It's been wonderful now that a feedback loop has developed between the show and the mainstream media: Stephen says something, the press reports on it, Stephen brags about or attacks the report. Those are the moments where I feel like maybe we've gone over the rainbow, and now are in Comedy Heaven. It's the opposite of the Daily Show, which Jon always deprecates (from "our lead-in is fighting robots" up through "our audience has the intellectual capacity of a three-year-old"). There's this fully-constructed, deep concept of what the show is, filled with The Truth and championed by The Heroes, and that joke just isn't getting old yet.

The confrontational part is also getting better. It's a difficult line to walk, but I think its best expression can be found in Stephen's regular battles with Russ Lieber (brilliantly played by David Cross); the fact it's scripted gives Stephen the chance to just lay into the guy and get the perfect comic response. They did one debate on the set which was absolutely brilliant. I'd love to see more things in this vein. When Stephen attacks "real" people, it's sometimes funny, but often they're just bewildered. Colbert shouldn't be afraid to use fiction to get a better laugh.

The Word has always been the highlight of the show, and it's still good. Several segments which I had expected to get old (like Better Know a District) are still going strong and often are the second-funniest thing of the night. (Speaking of which, his intros to BKaD are excellent, and I wouldn't be that surprised if the fact he does them convinces at least a few congresspeople to take the chance of an interview. Oh, and I know it's hard, but he needs to start getting more Republican interviewees. Come on, they can see what he does to the Democrats, it's not like he'll treat the GOP any worse.) The whole parody format of his show means he will never run out of material; there's always a new crisis in the world for him to speak out on. Of his special segments, the recurring War on Christmas was probably my favorite. Ah, and let's not forget the Threatdown! I really enjoyed it last week when the #1 item was killer bees, but it turned out the REAL reason they were #1 was because he feared they were in league with the bears.

It's fun to see other characters getting pulled into the show, while Stephen remains at the center; did you know Bobby the State Manager is actually the head writer for the show? I didn't. That's another tricky bit to manage, since you lose the point of the show if you pull focus off Colbert too long. But as long as it's people interacting with him, that's great stuff which switches up the show's rhythm while keeping Colbert's ego in plain view.

Whoa, and I just learned that Colbert will be performing at the White House Correspondants' Dinner. That is INSANE. Wow. We live in wonderful times, folks. 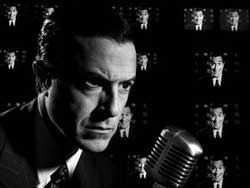 Well, that's it for this roundup. I'm also enjoying My Name is Earl; the best episode so far was the wedding one. I liked Everybody Hates Chris but not enough to keep watching past the eighth episode or so. The Daily Show is still good, of course; Rob Cordry seems to be stepping into Stephen's shoes as Senior Senior Correspondent, and he's great; very different character, but just as amusing. And Jon is still one of the best interviewers on television (but not, sadly, great at doing impressions). Drawn Together is a funny show which I will never be able to recommend to anyone. Yeah. Hooray for television!
Posted by Christopher Charles Horatio Xavier King III, Esq. at 6:51 PM