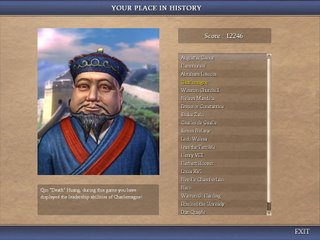 I just got my first Spaceship victory!

Hm, so I guess I inserted this picture on the left? That's annoying.

Anyways, this is also the highest score I've gotten yet in Civ IV, so I'm excited about that.

Also, for some reason my Hall of Fame is empty, even right after winning. I'm guessing this is just a problem with my local install, I checked the boards and didn't hear anyone else complaining.

If you haven't already, check out the information for Warlords. It looks like it stands a good chance of being the Best Expansion Pack Ever. Tons of new core functionality, including the new Warlord Great Person unit and unique buildings for each civ; plus some awesome scenarios, including a Mongol Invasion where the Mongols have MOBILE CITIES that spawn units based on the terrain they occupy. Amazing stuff.

Civ IV continues to creep towards being knighted as my favorite Civ game. I can't make that judgement official until it's been out for at least a year, but I've already logged more hours on this than I ever did on Civ III. Good times for all!

UPDATE 6/14/06: Finally figured out the Hall of Fame thing. I named my leader 'Qin "Death" Huang', and the game didn't like the quotes. I went back and loaded the game right before I won, got rid of the quotes, then finished the game. This time, my name popped up on the HoF. Apparently the HoF entries are taken from the replays, which are automatically saved when you beat the game, but in my case it couldn't save since Windows doesn't like filenames with quotes in them. Live and learn!
Posted by Christopher Charles Horatio Xavier King III, Esq. at 9:14 PM