Thursday night I beat Fall from Heaven 2. It was a fun game, though in the end, it wound up feeling much more like a Civ game. The big thing that was missing was the inevitable unwanted war at the end. To this I attribute both luck and skill. Luck in that there were no Evil characters, and skill in that I was able to successfully convert all other empires to follow Octopus Overlords, thus both making everyone Neutral and giving our relations the same-religion bonus.

This is definitely the most successful religious game I've ever played. I spread Octopus Overlords to every city on the planet, and once I had my religion buildings built, I was able to run with 0% taxation and still rake in a good chunk of change every turn. As in my other religion games, I tried to discover as many faiths as I could to keep my rivals from getting any ideas. As I expected I failed to get Fellowship of Leaves, but I could have gotten Runes of Kilmorth if I'd bothered to try (I thought it was hopeless). I did discover the Cult of the Dragon, The Order, and The Ashen Veil. The Cult spread throughout my continent, but since I never went to war I didn't get to experience the effects. The other two were just kept within my empire for the culture boost.

My biggest regret in all this is that I wasn't able to play much with the amazing new units and promotions after my barbarian battles were over. If and when I do my next game, I'll try for a more conquest-based approach so I can exercise them.

I ended up taking what seems like a really obvious path for my civ (the Kuriorates) and went for a cultural victory. After I got really far along the tech tree, I switched my culture to 100%, turned all my specialists to Bards, and had the cities start building culture. After I automated my workers, it was just a matter of hitting "Enter" a bunch of times.

Besides winning the game, the big culture boom also caused more cities to revolt and join me than ever before. I think a good five or six turned coat during the game. Most of them I ordered destroyed; as Settlements, they couldn't build anything useful for me. Amazingly enough, though, one of the cities was the Holy City of the Runes of Kilmorth, and I did gratefully hold on to that.

Speaking of which: one complaint I have with both vanilla Civ and Fall from Heaven is that when you capture a city, you don't get a chance to see what's in it before making your sack/take choice. That's just dumb. It's not only unrealistic, but it makes it very difficult to intelligently build your empire, since you need to choose between risking destroying a crucial world wonder or over-extending yourself unnecessarily.

Oh, another cool thing about playing as Kuriorates: your cities can get stupidly big. My largest two were nearly size 50 and still growing at a good clip despite widespread unhealthiness. The secret is to plant your cities near fresh water and grasslands, then build farms, and switch to Agriculture. Every Grassland tile will bring in five food per turn, causing a population boom. By the end game, my two big cities were working every single tile in their radius and supporting an army of specialist Bards. The thought brings tears to my eyes.

Like I said before, playing as the Kuriorates made this an entirely different game from what it might have been, so I'm eager to try another game to experience yet another challenge. I love the idea of the pirate civ, so maybe I'll give that one a whirl.

Not to boast or anything, but here is my victory screen: 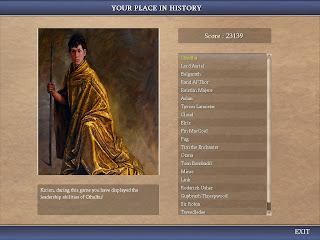 Hooray! In all honesty, I get the feeling this is inflated - I was playing on Warlord, and it doesn't seem right that a mere cultural victory in the 300s would give me this score. Still... I'll take it!

Oh, but just check out the names on that list. Aren't they awesome? Looking at this as the last part of the game just ensured that that special warm glow would last past the end of the game. Sigh... these are my people.

(Since I'm compelled to criticize, though, I do have some issues with the order of this list. How on earth did Belgarath get to be so high? I mean, I loved the Belgariad when I read it in fifth grade, but come on... he shouldn't be that high above the others. Ah, well - I suppose this game is still a work in progress, after all.)

In conclusion: Fall from Heaven 2 is an amazing user-created mod for Civ IV that puts the official Firaxis mods to shame. If you love playing Civ IV, or if you enjoy dark fantasy, or if you're interested in seeing a fine example of creative programming, you owe it to yourself to at least give this a try.
Posted by Christopher Charles Horatio Xavier King III, Esq. at 7:50 PM