This isn't a Sierra game.  It was written by a fan, and lies outside the official series continuity.  The story is original, but almost all the assets (sprites, backgrounds, music) were ripped off from Sierra games, mainly the VGA remake of Quest for Glory I.

It was a pleasant way to kill a little time, but it is undoubtedly inferior to the "real" games.  My biggest complaint is its lack of polish in general, and specifically its abysmal spelling.  It also is a jarring experience to play; it's sort of a tribute, but more of a parody, and its tone is very different from the clever voice of the main games.  Potty humor has replaced subtlety, and the overall thrust is quite sophomoric.

If you'd like to try it out for yourself, here's what to do:

First, download the game.  It's free, but you might need to hunt around a little bit - most of the links I found online were dead, and I'm not sure how long that one will be good for..

If you haven't already, get DOSBox installed and running.  No special configuration is required for this game.

Within Dosbox, run the setup program.  You may need to tinker a little with the settings; I was able to get it running with Sound Plaster Pro for sound and General MIDI for music.  Find and copy over the file CWSDPMI.EXE, placing it in the same directory as you installed.  Finally, run QFG.EXE.  After just a short pause, you should see the famous Sierra clouds and the first joke of the game.

Even with these settings, I still experienced some problems on my computer (Windows Vista 64 bit).  None of them kept me from beating the game, but I would recommend that you save your game regularly across multiple save slots just to be safe.  Here are the issues I ran into:

There were some more general oddities that might have been bugs, incomplete programming, or odd design choices:

Let's talk about some

Combat behaves exactly like in QFG1VGA.  It isn't much fun, but isn't required either; you can beat the whole game without fighting at all.  There seem to just be two monsters in the game, and you can outwalk either one.  Goblins are pretty easy, and I was never able to kill a brigand.  Goblins have a few silvers, like in QFG1.

Speaking of silvers, money is actually more interesting here than it was in QFG4.  You start out with a decent chunk, can earn more through a variety of means (combat, thievery, plot, manual labor), and can use it.  Some essential quest items must be bought, and there is one big-ticket expense that you can make in the game which will exhaust most of your savings.  One intriguing innovation is the introduction of a bank, where you can borrow money or save it, in both cases getting interest.

The story itself brings you back to Spielburg Valley, several years after your first travels there.  There have been a lot of changes, most of them for the worse... characters you liked in the first game have been murdered, new businesses have sprung up and bought out the old, and different people have moved into the valley.  In a weird way, part of the game feels crabbily reactionary: things should be just the way they were before, dag nab it!  Change is bad!  One of the biggest examples of this is the transformation of Erana's Peace.  My favorite location (and music!) in the first game, it has now been overrun by hippies seeking enlightenment.  Channeling Cartman, the dryad asks you to dispose of them and return the garden to its original state.  Well, fine.... but  is it really THAT awful to have more people visiting the garden?  Maybe so, I dunno. 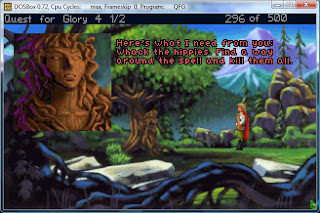 Word of warning: this really does not feel much at all like a Sierra game.  The violence and sex have been vamped way up.  I haven't read about who made this game, but it feels a bit like the work of an overstimulated teenager.  Not that that's bad, it just feels pretty jarring.

On the plus side, the puzzles in this game are actually quite good, arguably better than some of the real QFG games.  There are a wide variety of puzzles, so there's almost always something for you to do; I never felt "stuck" in this game.  A lot of things are available from the very start, while others require you to have solved other puzzles or obtained other items; a couple require time to have passed or you to have advanced the story.  With just a few exceptions, the puzzles generally make a lot of sense... granted, they're almost all variations on "figure out what item to use here, so you can obtain another item," but still, they were well done.

One thing kind of surprised me: a lot of the puzzles aren't required to beat the game.  They give you points, but don't stand in the critical path of your victory.  I sort of wish I had figured this out earlier, as I might have not spent so much time on a couple of the more time-consuming ones.  Still, this is another good part of the design: the puzzles are fun and rewarding, and you don't need to beat every single one.

Ah, the story.  In its outline it sounds interesting, and you could argue that it takes the dark themes of QFG4 and transports them to a more realistic setting, where you can see evil encroaching upon good rather than good overcoming evil.  Briefly stated, the Baron's son Bernard has plotted a coup to take control of the valley after his father's death.  He imprisons his sister, establishes a Gestapo elite guard, and brings in an evil hero (!) to take care of his dirty work.  The sheriff investigates Elsa's disappearance, and is murdered for his interference.  The new Baron didn't kill him directly, but instead contracted with the Mafia to do it.  The evil hero frames the butcher for the crime, leading to grumbling among the citizenry, who increasingly resent Bernard's arrogance while not having sufficient reason to doubt his rule. 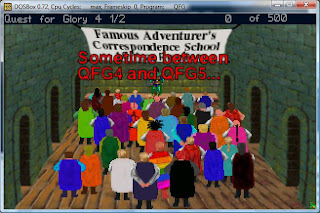 In parallel with this political turmoil, economic and social change are sweeping the valley.  Chain stores have arrived and bought out local businesses: the general store is now a Starbucks, and the Aces & Eights tavern has become Coyote Ugly.  The powerful figures from the first game have left: Baba Yaga flew the coop, while Erasmus was driven out by Bernard and the Brigands disbanded.  Mediocre figured have taken their place: The Joneses moved into Baba Yaga's old place and set a welcome mat in front; Erasmus's tower has been foreclosed upon for failure to pay taxes; and a white-trash bar fills the old Brigand hideout. 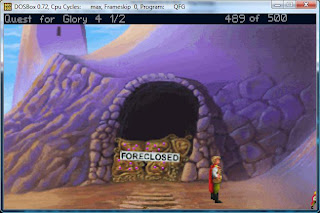 So, in general, the story is actually not bad.  The real problem I have with it is the sophomoric sense of humor and the uneven tone.  You lurch from supposedly feeling bad about the Sheriff's brutal murder to killing hippies; after helping a reformed vampire find acceptance and love, you travel to the Island of Homosexual Pirates.  The homophobia throughout the game feels jarring, and reinforces the impression that the script was written by someone in junior high.

The actual endgame is a tad anticlimactic... I enjoyed the sequence when you broken into the castle, and later when you rescued Elsa, but the final puzzle left me scratching my head (really?  the pirate map?).  The obligatory joyful communal scene in the courtyard was pretty fun.  The author has some pointed things to say about QFG5, which would worry me more if I had felt more in tune with this game.

You'll notice that I ended the game with over 500 points.  Yippie!  This is another bug - you can get 2 points EVERY time that you wash the laundry in the Confederate bar.  Also, at the end of the game, the non-critical quests which you solved will reward you with additional messages... a cute touch.

I think there was just one quest I didn't solve, or two if there really was a thieves' guild in this game.  I was able to release the ghost from the church and find her murderer, but couldn't kill him in combat, and couldn't find any other way to kill or arrest him.  Ah, well.  Like I said above, I'm glad that the game can encourage you to do quests without brutally punishing you for failure.

Finally, the game intrigued me by providing answers to many of the things I'd wondered about when first playing Hero's Quest fifteen years ago.  What did the Meep Peep look like below ground?  Just what was blocked off by that avalanche?  What WAS the deal with that one log that looked important but somehow wasn't?  In working through the expanded vision of the Spielburg world, I finally felt like I had tapped into the kindred spirit making the game... we're very different people with different tastes, but shared a sense of wonder and curiosity, first sparked by Lori and Corey many years ago, and still nudging us to revisit and expand those experiences throughout our lives. 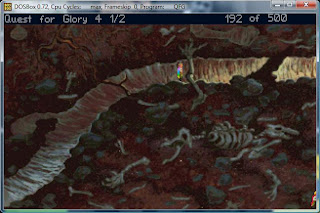 I'm at a bit of a loss when trying to evaluate this game.  Is it really fair to compare it with the Quest for Glory series?  Almost certainly not, as those games had budgets, talented teams of professionals, original content, etc. going into them.  This game was written by amateur fans and released for free.  So I probably shouldn't be too hard on it.  At the same time, I can't honestly claim to enjoy it as much as the real Quest for Glory.

All in all, this is an interesting little curiosity, but not required even for fans of the series.  If you're looking for something to do, by all means check it out, but it won't really add much to your appreciation of this series.
Posted by Christopher Charles Horatio Xavier King III, Esq. at 9:32 PM