One of the greatest appeals of the QFG series has always been its replay value; you are guaranteed at least three fun and challenging runs as each of the classes, on top of the normal challenges to maximize story points or find hidden goals. That said, at least at present I don't have the time or energy to immediately replay any of these games, so I'm taking my thief through the whole thing.

Side note - the AGD remake seems to have plugged up a bug/design-flaw that I actually enjoyed. In my three plays through the first QFG2 that I remember, I managed to become a paladin both when playing as a Magic User and, amazingly, as a Thief. The one time that I was TRYING to become a paladin, as a fighter, I didn't become one, despite seemingly having done everything right. It was only when reading the remake's message boards now that I finally discovered the reason why - I had thrown a rock at the griffin. (As a fighter, I had assumed that I was supposed to take the aggressive solution to my problems.) In the remake, they have slightly tweaked the formula for becoming a paladin; throwing a rock is no longer sufficient to deny you this award, and they have made it impossible for a fully larcenous thief to share in it.

So, again, mixed feelings... it was cool to be a paladin thief in my first play through QFG3, but also a little weird. I found significant differences when I played through as a pure thief, and got to see some content that was new to me.

My overall impression of QFG3 is that it is a really short game. QFG2 lasted me for a few weeks of occasional play sessions; I got entirely through QFG3 in one semi-focused Saturday. The biggest reason for this is that QFG3 lightens up on the calendar. It has a bit more structure than QFG1, in that some events (especially early in the game) happen on set days, but there is no longer a hard time limit, and you can do things as early or late as you want. For many players this might mean taking their time and the chance to buff their stats. For me, it meant an end to the tediousness of QFG2's 30-day cycle, and much denser gameplay.

QFG3 also feels like a limited game. In a way, each game in the series up through the third entry has seemed more narrow than the one before. QFG1 gives you a whole valley to explore, filled with all sorts of cool little places and creatures to encounter... just off the top of my head I can remember the town, the castle, the cemetery, healer's cottage, Erana's Peace, kobold, Erasmus's tower, avalanche, waterfall, brigand's cave and fort, the dryad, Baba Yaga's cottage, magic mushroom patch. QFG2 technically takes place in a much larger place, but the city feels a bit artificial (those alleys are creepily empty), and there are a grand total of three locations in the desert: the griffin, the three, and the oasis. QFG3 adds an overhead map, which technically means that you're in a much larger place, but still, there is a paucity of locations. Tarna seems like a large city, but you are restricted to one segment of it. In the wild, the only locations I can remember are the honey tree, Uhura's village, the World Tree, and the enchanted lake. Some more are added once you reach the endgame, but they don't really feel like part of the main game world since you can't revisit them.

Overall, the feeling is closer to QFG2 as a game that runs along on rails, rather than QFG1's wide-open, try-anything ethos. That said, I don't want to claim that this is a bad game. The plot is noticeably denser and darker than that of the first game, and has some actual pathos to it.

In a weird way, QFG3 sort of makes the same arguments as Ultima VI, though with less eloquence. It similarly inverts the standard fantasy RPG goal: your main purpose is to prevent killing rather than causing it. There is a fair amount of mystery and sense of danger early in the game - a failed peace mission, conflicting accounts of stolen cultural artifacts, hardliners in government who press towards popular war, only a few voices resisting the press into conflict.

It's all cool and interesting, but I think that the final reveal actually cheapens it a little bit - you find that the whole thing has been orchestrated by demons, seeking to start a war to increase their power. Which is fine and a good story and all, but what was so compelling about "The False Prophet" was that there was NOT an ultimate hidden evil: just the evil that lives in all of us and makes us fear those who are not like us. QFG3's story is excellent, but it does not transcend.

Its gameplay was pretty good... the puzzles are generally reasonable. Fighting marked a big change after the revamped QFG2 and was a return to the old QFG style that I remembered: quick, adreneline-fueled button-mashing and swiftly determined outcomes, rather than QFG2VGA's elaborate dance of parry and riposte that made every skirmish last several minutes.

The big downside, for me at least, were the weak prospects for a thief. This is realistic - granted, you ARE in a big savannah and jungle - but still, I went through pretty much the entire game without ever picking a lock or climbing anything. At least this time I got to do a little breakin in the Leopard Village; I think that in my previous playthrough, my paladin-ness had made me do the warrior trials instead. But still, considering that this was the one and only chance for espionage, it was kinda lame... use your special magic rope, sneak, grab, leave. Even if you take the extra time to pillage the chest, it just means a few measly coins and, like, a potion or something. Lame!

Also annoying to a thief - as far as I can tell, there's no way to get back your throwing daggers once you've tossed them. Nope. This greatly irritates me - those things cost good money! Fortunately, you can still do a lot of damage with rocks.

In contrast, QFG2 gave significant and interesting career paths for each profession. The thief had four interesting, challenging jobs to take. The magic user could find, challenge, and eventually join WIT. The fighter could pass the trials to become initiated into the EOF, and strive for the benefits of becoming a paladin. I'm not sure if QFG3 has similar things for the wizard and fighter, but at least on the thief front, this unique content takes a step back.

On the plus side: MONKEYS! Monkeys make everything better. I whole-heartedly salute the Sierra team's embrace of this key concept.

The romance angle is interesting too. The bride puzzles were actually some of my favorite parts of the game. It feels a little unrealistic when you kiss her, but whatever - you're a hero! It just adds more to the surprisingly broad roster of intriguing women you've encountered throughout the series. In a weird way, QFG sometimes feels like James Bond Lite - every game offers more good girls and the occasional bad girl.

Oh, one final thought. In my only plays through the game, I've gotten all 5 friends to show up at the end. Since at least some of these are optional (you don't have to befriend the thief, and can probably get by without ever spending much time with the villager; plus, I assume you can kill the possessed liontaur daughter), I'm curious what happens if you reach the end with less than your full complement. Do you just lose the game? That would suck, clearly. Maybe it's harder, or just sadder at the end. I dunno.

QFG3 is a bit of an oddity, but that's a good thing. The franchise never seemed content to crank out copies of a successful formula, and always tweaked what was expected in a game. I'd have to say that it's my least favorite of the series so far, but still an enjoyable diversion.

From here on out is where it really gets interesting - I honestly don't know what's going to happen in QFG4, and even less about what's ahead in Dragonfire. Bring it on, Sierra!

UPDATE: Whoops, I forgot to include the screens I grabbed.  Here they are.

First up, the point where I finally started to love the game: when a talking monkey enters the picture.  Great success! 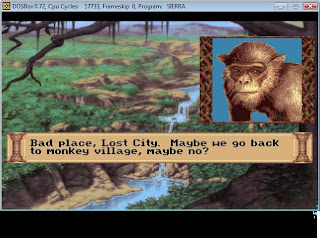 Finally, thought I'd share my stats at the end up the game.  They are, how do you say... pathetic?  I was definitely racing through the story, and didn't reach 300 in a single one.  Heck, only Stealth (which I'm constantly using) and Communication even got past  250.  I was really glad that I had taken the Luck boost in QFG2, though: through the whole game it didn't go up a single point. 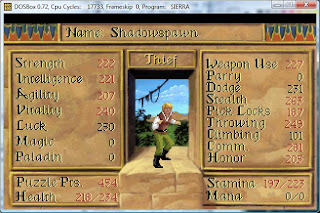