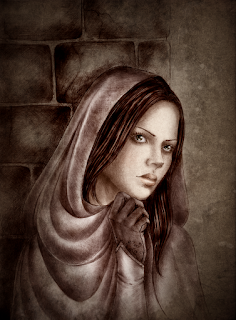 Poria is a character in a project I've been kicking around for a while now with the working title "Skal." Skal is a fantasy land I created in high school, forgot about for over a decade, and recently started playing around with again. I'm not sure if its current incarnation will ever be released, but it's been incredibly fun to work on.

Poria lives in Ettan, the capital of House Hansa, on the eastern shores of the Tanalga river. Her husband is an agent for Patriarch Hansa, charged with traveling throughout the land to find any enemies of their people. Poria grows increasingly important over time, gradually coming into her own as a collector and analyzer of information, kind of a medieval equivalent of the NSA. She may be the only person who can uncover the threat against Hansa before it's too late....

I'm indebted to the very talented artist Isbjorg for drawing this portrait. This is the first time I've ever commissioned anything, and I was very pleased with how well everything turned out, both artistically and in terms of process.

It's kind of funny... I've enjoyed writing and programming ever since I was young, but I've always been horrible at art. For years I've felt like that's been a handicap that has kept me from doing something like creating my own game. This seems like a very late point to be making the realization: "Oh, I don't need to do everything myself! There are other talented people out there, who possess skills that I lack. Maybe we could work together on something!"

Like I said, I don't know if anything will actually come of Skal or not. But regardless, it's been a very good exercise for me, and stuff like this helps make it seem a little more real.
Posted by Christopher Charles Horatio Xavier King III, Esq. at 7:24 AM