Increasing Randomness in a Chaotic World

Another grab-bag of thoughts about half-finished games, finished short books, and half-baked theories about choice in games…

I am furious at The Walking Dead! I'm in Episode 3, and got so mad at the story that I nearly hurled my tablet at the wall. Which I guess is a testament to what they're doing here - it's rare for a game to get me that worked up. 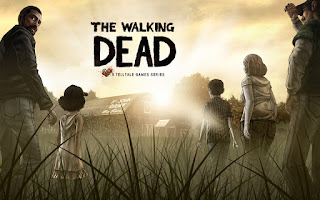 The game fills an interesting niche within the Walking Dead franchise. I've been pretty happy so far to see that it doesn't exhibit the same streak of sadism that can be found in the comics, which largely turned me off from reading them after the first few collections. At the same time, though, it's an unabashedly adult game, complete with the bad language and shocking violence that implies.

MINI SPOILERS for Walking Dead (Game, but also a bit for the show and comics):

The game, particularly the first episode, is set during the very start of the zombie apocalypse, and so you can witness first-hand the chaos and the breakdown in social order that Rick Grimes slept through. You encounter several ancillary characters from the main story, but for the most part you're striking a new path in another part of the same world.

That said, the overall arcs of the game feel quite familiar to those of TWD's Rick Grimes story. A small and close-knit group, including several families, forms. Internal tensions within the group threaten to tear them apart. The group works to overcome their differences, certain members die, and things enter an uneasy status quo. Just when it seems like the walkers might be stoppable, though, other groups of human survivors enter the picture, threatening the safety of the group. The group spills from crisis to crisis, and ultimately betrayal and violence threatens to destroy the group.

There's also a healthy dose of the macabre. The first episode was relatively tame, meaning that it just included the stuff you would typically expect from a zombie movie. (I played this on an airplane, next to a middle-aged woman, and felt a bit self-conscious when a part of the game had me repeatedly tapping the screen to cave in the skull of a ravening zombie with a hammer.) The second episode takes a sickening turn; I kind of suspected where the story was going halfway through, but refused to believe it until it was too far. The third episode… well, let's just say that it was a gut-punch, and at this point I'm not sure if I'll be able to keep playing. Telltale Games already has my money, though.

The impact of that gut-punch really got me thinking, though. After all, I'm decently well acquainted with the tropes of the zombie movie. I expect that good people will die and bad decisions will be made. Being a participant in the story changes things, though, and being able to help shape the story changes them even more: I feel invested in this group of survivors in a way that I never would by simply watching a group of idiots running around on the big screen. I might curse the writer of a movie if a character I liked gets killed; but I kind of expect it, and understand that this loss is part of the contract for a zombie movie. When a character in a game dies, I definitely curse the game creators, but I also kind of blame myself a little as well. I shouldn't - there is no way I can save this person - but there are enough other lives I've been able to save within the game that it FEELS like I could have, should have done something differently to preserve this one.

On a related note: anyone who has ever watched any variation of a zombie instantly becomes an armchair quarterback, dispensing the essential pieces of wisdom to beleaguered characters. Typically, this is one of the following:
1. "He/she has been bitten! You have to shoot them in the head NOW!"
2. "That person can't be trusted / relied upon! Get rid of them now, before they get everyone killed!"
3. "Don't split up!"
Consider #1. As the viewer of a movie, it's an easy call to make. You know the calculus: there is no hope, and once someone has been bitten, that's it. Why prolong the misery and risk them turning at an inopportune time?

Of course, if this were real life, that would be an impossible call to make, especially if the person in question were a relative or a close friend, perhaps someone who has saved your life numerous times in the past. We have deeply ingrained senses of empathy, loyalty, and optimism that would keep us from following through.

The game puts me at a midpoint between those two perspectives. I saw one of my companions get bitten. This is someone who I had traveled with for three episodes, covering many hours of gameplay. I had gone to great lengths in the past to save their life and keep them safe. I'd shared precious, limited food with them. I knew people who cared about them.

And so, what did I do? I knew how it had to end - with a bullet in the head - but I wanted them to experience every remaining human moment they could have. So we journeyed onward, keeping an eye on them, knowing the great risk we were taking, but unwilling to make the tough call and end it immediately. I have become the sort of person who I would yell at in a movie. Becoming a character in a zombie story has helped me understand why they can sometimes do foolish things for perfectly good reasons.

A brief gaming note: I have "beaten" Fallen London! Okay, okay… not really, but I have wrapped up the last few pieces of content that I hadn't completed yet, including a really fun Christmas-themed arc that played out last month. I've also acquired the outfit I wanted. At this point I'd just be grinding materials and Echoes, so I'm going to cheerfully set it aside for a while and wait for the next phase of the story to unlock. It'll be interesting to see what comes next - lately, Failbetter has seemed to be focusing on expansions that players at a wide range of levels can enjoy, instead of extending the story towards its conclusion (publishing the next phases of the Ambitions, expanding the level cap, etc.). That's probably a wise decision, since it gives players even more stuff to do; on the other hand, I never felt like I needed to grind until well after I became a Person of Some Importance, so the players at the level cap probably appreciate it even more than those who are at lower level do.

I just finished reading "The Running Man", a short novel by Stephen King. It was a pretty good read… very pulpy, and in many ways uncomfortably prescient, with its anticipation of competitive reality shows the least of its disturbing premonitions. It's also pretty disturbing to read what appears to be a positive portrayal of Stockholm Syndrome.

I then continued on in playing the Witch Hunt expansion, following my originally published plan through the new DLC. That was fun, but I realized after beating it that I had misjudged the intended order. There wasn't an option to import my post-Witch Hunt save into Golems, and after doing some research online, I realized that the intended order is actually DA:O -> Awakening -> Golems -> Witch Hunt. So, I'm now starting off on Awakening. I'll save my thoughts on Witch Hunt for when I'm through with all of the DLC.

However, I will share a few thoughts on Awakening (potential spoilers have been replaced with incredibly vague allusions):

After taking a break, I started watching season three of Doctor Who. I THINK I like Donna more than Rose, but I'm just one episode in so far, and will reserve judgment.

New season of Archer is off to a fantastic start! Second half of Parks opened strong! I'm waiting with nervous trepidation for Community's delayed opening (can't wait for that Halloween episode to air on Valentine's Day!). And the 49ers are going to the Super Bowl! That'll keep me occupied for a while.
Posted by Christopher Charles Horatio Xavier King III, Esq. at 8:08 PM