Remember "Below"? Chris Gardiner has recently brought the game into beta. He's given beta access to all the kickstarter backers, and I've had a lot of fun over the last couple of days returning to the game's dungeon. There have been many significant changes since the public demo of the game that was available during the campaign, so this isn't just an entertaining gaming experience, but also a fascinating glimpse into the process of creating this sort of game. 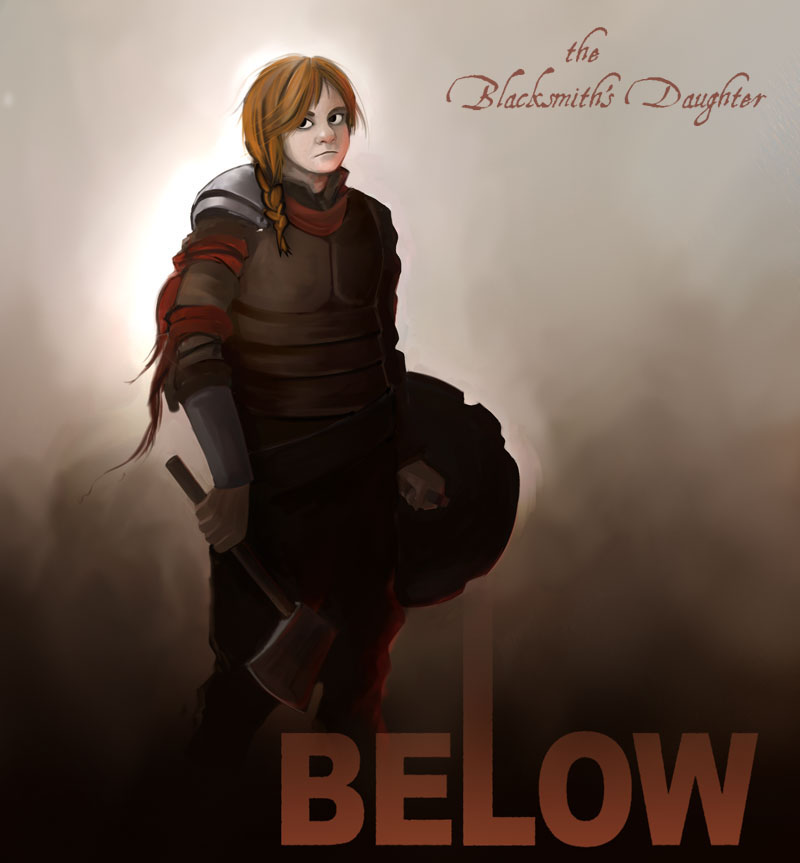 From the beginning, the game has been designed and advertised to support different types of characters, but I'm finally getting to see how that works in practice thanks to the addition of The Blacksmith's Daughter. While the very basics of game mechanics work the same as with the original Barefoot Friar, the experience of playing as her is very different. She can upgrade her own equipment, so you tend to be better off just picking up one or two items, then focusing on making those items as good as you can. Gear is much more important for her thanks to its increased utility. And the flavor of the game changes dramatically, thanks to the character-unique aspects of her bond with her sister (or father).

The game looks absolutely gorgeous, too. Well, keep in mind that it's a StoryNexus game, so it's 90% text and 10% evocative art. I've been very impressed by how well it works, though. From what I understand, StoryNexus ships with a library of card art, but almost all the art in Below is bespoke: Paul Arendt did a lot of the original concept art and card art for the Kickstarter campaign, and Yasmeen Khan (whose work I've enjoyed reading but I didn't realize was artistic) has created most of the art in the finished game. It's gently moody, the kind of art that whispers at possibilities, at things scuttling just outside of view, of haunting memories chasing you from the surface.

I "beat" the game on the first full day, though that was in large part due to some quirks of design (which have been duly reported and fixed) that allowed me to do everything without ever descending to the fourth level. I don't think I'd ever restarted the game during the kickstarter campaign, and I'm loving the way continuation is handled, which is a bit like the "New Game +" mode that I love so dearly in RPGs. Essentially, you can keep your experience and some unique items, but restart the story and reset your progress. This will get more compelling when more quests are available, but even for now, I am finding my second journey quite different from my first (thanks to an experience in getting Cursed, which has had some unexpected ramifications on my journey).

The game is a little hard to pin down, but if pressed to make an analogy, I'd say that it's closest to a game like Rogue or NetHack. There's the same randomization, the same tension between safety and reward (lurk on the upper levels for safe but slow progress, or plunge deeper to risk your life but have a shot at great treasures), and even the same elements of idiosyncratic customization. But, Below already has much stronger story elements, including the central dynamic that ties in life on the surface above with death in the dungeon below. It isn't a Bioware-esque story with strongly detailed characters and companions, but a more evocative story that sketches things out and leaves you to fill in your own emotions and details.

The beta is closed, but Chris has graciously refrained from requiring NDA's of testers, so I may chime in a bit on my experiences throughout. Even though the beta is closed, the original demo version is still running (albeit at a more reasonable 10 actions rather than the prior 100), so if you'd like to give it a whirl yourself you can do so. There's a new but fairly active community at the Google Plus community Chris set up, as well as some very insightful posts he's already made on the game's official development site.

In other StoryNexus news:

Contrary to statements I made last week, I'm still playing Fallen London. They've been pretty consistently adding new fun stuff to the game; most recently, I've been breeding exotic ravens and pickpocketing marks in Spite. The game continues to innovate on multiple fronts: new stories, but also new tones, and even whole new systems; the Pickpocket Promenade has some similarities to other special areas like the Heists, but I find it less frustrating while still being challenging. Anyways. I'm definitely less obsessed about it now than I have been in the past, but as long as they continue building the world, I'll continue playing.