Time for a return to one of my periodic fascinations: Kickstarter campaigns!

A new computer game kickstarter has kicked off, and it is blowing up. Torment: Tides of Numenera aims to be a spiritual successor of sorts to Planescape: Torment, one of the strangest and most-beloved RPGs of all time. It's set in a completely new fantasy campaign setting, and reunites a significant part of the team that created the original PS:T game. It raised its $900,000 goal in six hours, and is floating around two million as we speak. I'm sure it will slow down as the month progresses - there's a lot of pent-up demand for more Torment, and the most enthusiastic fans hurled themselves into its gaping maw at first opportunity - but they already seem set to blow through all their currently defined stretch goals, and could easily become the most-funded computer game on Kickstarter if they keep it up. I'm holding out hope that they'll be able to hire Jennifer Hale, Michael Weiss, and the other fantastic voice actors from the original game to play new characters here.

The culture around Kickstarters is really cool and encouraging. The thing that has surprised and pleased me the most is how fraternal it is. Torment is being run by a small company called inXile. The currently best-funded game project on Kickstarter is Project Eternity, which is also a spiritual successor to a beloved game from the late 90s/early 2000s, and that's run by another small company called Obsidian Entertainment. You might think that the two companies would be competitors, or at least rivals. However, that's not the case! You can see that each company has helped fund the others' games, and it's really cool that one company's CEO is the lead endorsement on the other company's project.

I also love how Kickstarter encourages companies to share insight into the game-development process with their backers. This isn't that unusual - I'm sure that an investor would also get access to internal development procedures - but since we funders are also fans, we get to focus on the really cool and interesting aspects of development. It's in the company's interest to keep us informed, too... as they enjoy saying, we're not just the backers, but we're also the first wave of marketing. Keeping apprised of evolving feature sets and milestones helps us manage expectations while maintaining excitement.

One thing that does make me a little nervous is that we're now experiencing a second wave of Kickstarted game projects, before any major games from the first wave have been completed. This all really kicked off with the Doublefine Adventure game, and we also have Wasteland 2, Shadowrun Returns, the Two Guys from Andromeda, and many more in the pipeline. I'm still excited about the potential for creating quality games under this model, but I'm really looking forward to seeing some actual success stories. (Not that that has kept me from opening my wallet again - hey, it's Torment! - but I grow more hesitant each time I do it.)

Many of the major Kickstarter games were scheduled to ship in 2012, and none of them did. That really isn't the fault of the developers, more a weird quirk of the impact of successful campaigns. Due to the nature of Kickstarter, companies are incentivized to set initial goals for the smallest achievable game they can make. This is basically something equivalent to an iPad game: nice-looking and fun, but with fairly shallow gameplay. As they exceed the goal, new stretch goals continue to expand the scope of the game. New characters! New areas! New classes! New quests! Mission editors! Multiplayer! Suddenly, what was a nine-month project has ballooned into a year-plus project. The end result will be cooler, but it's our own generosity that made them miss their target.

As a programmer, I know well that you can't save time by adding people to a project. This does seem to be a minor but increasing complaint in the kickstarter community: "We gave you so much money, why don't you just hire more people?" They often do hire more folks - and, again, the developers are remarkably transparent in explaining what kind of people they bring on and why - but beyond a certain point, adding additional people will just slow down the project even more. You can't make a baby in one month by adding eight more women.

It's been very cool to see how some developers are looking to improve their schedules by crowdsourcing other aspects of the game, beyond the initial funding. inXile has had surprising success in sourcing art designs for its games by turning to the community. Basically, they will post a description of the sort of thing they've looking for (grimy gun turrets, patched-together water tanks), give designers ten days to come up with models, then pick the ones they want, pay the artists, and give the artists credit within the game and let them retain the rights to their creation. This seems like a huge all-around win, and also a potential boon to future game creation projects. inXile can tap a flexible resource without needing to ramp up an in-house modeling team that would likely get laid off in a few months; aspiring artists can break into the gaming industry; and truly dedicated fans can contribute in a creative way to a property that they really enjoy.

Along similar lines, one of the early ideas of Shadowrun Returns has been allowing fans to build their own missions for the game.  This nicely evokes the pen-and-paper RPG roots of the Shadowrun setting, where creative GMs would design their own adventures to send runners through. However, it could also turn out to be a brilliant piece of strategy for Harebrained Schemes. If several user-created missions are already available at launch, then Shadowrun Returns will automatically become a longer game, with more stuff to do, and hence potentially more valuable to future buyers. The developers recognize the importance of a strong mod/creator community, and have provided early looks at their mission-creation tool, offered direct access to developers so we can ask our questions and plan our creations, etc. I've gotten increasingly excited about the possibilities here, and have started fooling around with some mission ideas of my own. Who knows if anything will come from my efforts, but between the thousands of passionate Shadowrun fans out there, I'm sure some great stories will be told.

Finally: I've been saying for a while that Kickstarter is a fascinating concept for crowd-sourced funding in general. So far it's been a successful model for funding movies, books, music albums, independent films, and board games. I'm hopeful that, in the next 3-6 months, it will also be demonstrated as successful for funding major (albeit not AAA) computer/video games. In the entertainment realm, it would be fascinating to see if you could successfully crowdfund a major property: a new season of Community, Terry Gilliam's Don Quixote, something like that.

I've paid less attention to non-entertainment initiatives, but those are actually more interesting and encouraging in the long run. The most famous of these is probably The Oatmeal's hugely successful effort to build a goddamned Tesla museum. That just warms my heart: nerds all around the world opened their wallets to help pay a belated tribute to one of the bestest nerds of all time. 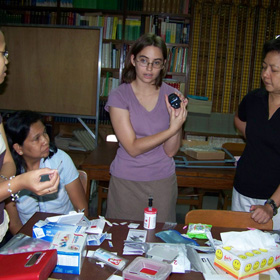 And, speaking of science-related crowdfunding initiatives: my friend E. A. Quinn is a biological anthropologist who is helping to lead a field study in Tibet later this year. This is some terrific pure research, gathering data on a subject that we don't know much about (how altitude affects a mother's milk). If you have a few dollars to spare for science, I highly recommend tossing some her way! No, you won't get early access to a level editor or a downloadable digital soundtrack, but you WILL get to expand our species' collective knowledge of itself and be officially credited as a supporter of this study and  receive a beautiful journal of the published results! Microryza will accept donations as small as $2. Come on and do it! For SCIENCE!
Posted by Christopher Charles Horatio Xavier King III, Esq. at 7:43 PM