I'm always grateful for book recommendations. The success rate isn't perfect - each reader has his or her own preferences, and it's not surprising that stories which impress one person might not make much impact on me - but if it wasn't for recommendations I would almost never venture outside my silo of authors I've previously read and enjoyed. When someone does recommend something that resonates with me, I immediately perk up, because I can explore that resource for some more good reading material. 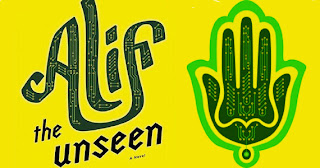 A friend's mom recently recommended Alif the Unseen to me, and I'm glad that she did, because this book would never have shown up on my radar otherwise. I hadn't heard of the author before, and I don't think this is the sort of book that would be reviewed by the New Yorker or one of the few other publications I check for reading guidance. She was correct in guessing that I would like it, though. It's a fun story, with well-drawn characters and some surprising plot developments, and somehow manages to fit in the intersection of several genres and themes that I particularly enjoy.

I really enjoy reading science-fiction (particularly of the cyberpunk variety), and have long enjoyed fantasy as well. However, my experience with books that combine sci-fi and fantasy is mediocre to poor. Shadowrun is a great game setting, but I don't consider the books classics. Other series technically combine the two, but frame one genre entirely within the other rather than allowing them to intermix. (A classic example: "This fantastic world we live in was settled by explorers from outer space!")

Alif the Unseen is set in the present day, but significant chunks of the book read like cyberpunk. The protagonist, the titular Alif, is a gray-hat hacker. He lives in a semi-despotic Middle Eastern oil-rich state; I'd initially thought that The City was Tehran, mostly because of some early references to Persians, but realized that it's actually one of the gulf city-states. My guess would be Oman, Qatar, or Abu Dhabi. Anyways: it's a corrupt monarchistic security state, where the government censors the Internet and tries to keep the people in line. Alif has the same amorphous sense of digital freedom that I share: he follows no particular ideology, but supports all forms of dissent equally. He makes a modest income by providing Communists, Islamists, and other factions with hosting and obfuscation, keeping their web sites up and preventing the state security apparatus from cracking down on their communication.

The quality of the technology stuff is pretty good... it's not like Neal Stephenson, where you can tell that the author deeply groks everything, but G. Willow Wilson seems to have a decent grasp on how stuff works, and other than a few overly amorphous invocations of "the cloud" she tends to present things in an entertaining yet fairly believable fashion.

The book gets interesting, though, once the fantasy angle enters. Alif is a fan of fantasy, and has devoured books like Lord of the Rings and The Golden Compass. This is a Middle-eastern novel, though, and so the form of fantasy they encounter is an ancient one: jinns and various other native spirits. Alif turns to them for help after he is exposed by The Hand, a top operative in the State's cyber security office. It turns out, though, that the two sides are more connected than you might think, and both mortals and immortals have sought out the others for help and amusement.

The high point of the book for me lies in the synthesis between the two, and particularly the concept of metaphor as applied to programming. It reminded me a bit of some other fairly philosophical meditations on software that I've read elsewhere, like Robert Pirsig's concept of a "mu" state as applied to binary programming, a concept he briefly developed in "Zen and the Art of Motorcycle Maintenance." In this book, the technical aspect is mostly concerned with the concept of quantum computing, a theoretical but very intriguing line of inquiry that could have massive implications for computers in general and cryptography in particular. I recommend The Code Book if you'd like a more cogent explanation, but basically, a quantum computer is able to hold a finite set of data with each point of data being in an indeterminate state. Each possible permutation of that state essentially exists in a separate universe. Once the data is observed, the quantum state collapses and only a single, "correct" version of the data exists. It essentially lets a computer instantly operate on every conceivable possibility at once.

Within the context of "Alif the Unseen," the key is in teaching computers to think in metaphors. Similar to quantum computing, the idea is letting a computer accept that multiple, contradictory things may all be true at the same time. The book uses the example of the Quran: the original Arabic contains words that are translated into modern terms that did not exist when it was first written. For example, the word that is currently translated as "atom" was previously translated as "molecule," and before that "mote," "speck of dust," or "grain of sand." The actual word doesn't change, but the word is capable of holding multiple meanings, and different meanings will be appropriate for different ages. So, what if a program was able to apply a similarly rich understanding to data? There's an early gesture towards this idea when Alif writes his "Tin Sari" program, which apparently uses machine learning and mountains of data to develop a model that can identify a particular human being's communications, regardless of their IP address or online identity. The idea reaches its apotheosis when Alif works with the Alf Yeom, a secret book written by the jinn that is structured as a dialectic between a logical/binary/digital observer and an emotional/analog presenter.

It's all nonsense, of course. But it's entertaining nonsense, and does let the author dig a bit into the role digital communications have in our world. A Muslim sheikh ponders whether it's a sin to eat pork in World of Battlecraft. Dina challenges whether Alif bears responsibility for the actions of militant groups he provides services for. A question lurking in the background is: Are there analogies we can make from modern communications back to older ones, that will tell us the proper ways to behave? Or is there something fundamentally different about the instant and global nature of modern conversation, and does this mean we will need to create entirely new rules for them?

The climax of the book takes place when a revolution breaks out in The City. This book feels extremely au courant: not only does it have hip literary references like The Golden Compass, but it's clearly set in the middle of an Arab Spring. In other words, you could expect the events in this book to take place tomorrow.

Alif has hoped for a revolution, but when it actually arrives it's rather terrifying. Organized marches with communists and islamists united seems to offer initial hope, but the scene quickly transforms into that of an unruly mob, eager for blood and not terribly particular about who will suffer. The aspect of the book I was most ambivalent about was how social media intersected with the street protest. At the climax, Alif manages to break The Hand's firewall and restore Internet access throughout the country; the book describes how the protesters were suddenly able to connect with their Facebook and Twitter circles again, and that lights a fire across the world that leads to this great action.

And... I dunno. On the one hand, social media has definitely received a lot of the credit for the Arab Spring. We've heard talk of "Twitter protests" in places like Tunisia, and there's certainly some validity to the idea that distributed communications networks can facilitate ad-hoc actions. However, I'm fundamentally skeptical that social media itself has any influence whatsoever on the real world. I don't think that "Like"-ing a news story about a dictator's crimes does anything to remove that dictator from power, nor that retweeting a protester will help their mission. Receiving information through social media is only helpful if it causes you to take direct action in the real world: show up at a protest, or write a check, or vote a certain way. The idea that Facebook would make any difference to an in-progress protest seems ludicrous to me.

But, I could be wrong! I certainly wasn't expecting the Arab Spring before it occurred, and it's possible that the world is changing in ways I don't recognize.

Plot aside, the book has a really excellent collection of characters. Most of them are Muslims, either culturally or devout, which is a rarity for me. Some characters are very funny, particularly a flippant, rich member of the aristocracy. Others are wise, making statements that advance the story but are also worth pondering on their own. The main character, Alif, is a bit of a shallow cad at first, but his character evolves in an engaging and pleasant manner throughout the book.

All in all, it's well worth reading. It feels particularly apt for today, with the rapid changes going through the Middle East, but I think it should hold up fairly well (modulo a few brand names and cultural references). It's a fun, quick read with some interesting ideas worth unpacking and mulling over.
Posted by Christopher Charles Horatio Xavier King III, Esq. at 7:09 PM