I've realized that I often start my book-related blog posts with some explanation as to why I started reading some particular book. I really don't know why I do this. It might be a subtle form of deflection, to justify why I'm implicitly not reading another one of the many titles that have been recommended to me. Or perhaps it's just a crutch writing mechanism, a boring but reliable technique that lets me ramp up to writing about a story, instead of abruptly commenting on the text.

One unexpected but appreciated aspect of this habit, though, is that it also provides some minor documentation on my own life. These days almost all my blog posts are about books or video games, but the original intention was to just be a public journal, and while I've certainly drifted from that in recent years I do enjoy that semi-autobiographical aspect. What I like even more is re-reading some of my older blog posts. Some of them really surprise me: they'll reference experiences that I'd forgotten I'd had, or, even more disconcertingly, contradict my own recollections. It's fun to re-read my early posts after moving to California and suddenly remember all the weird things I fixated on (incredibly narrow right-turn lanes!). It's stranger to look up my old write-ups of Planescape: Torment, which I remember as having a particularly dark sense of humor; upon reading it, though, I can't ignore that I specifically call out the game's lack of humor, dark or otherwise. Attempting to reconcile my memories with the written record leads to a certain sense of vertigo. 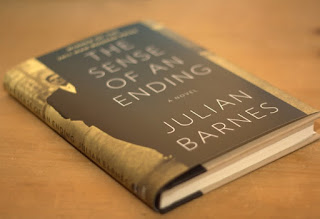 All of this is very much on my mind thanks to the phenomenal book Sense of an Ending, by Julian Barnes. I picked it up more or less on a whim, after reading a very brief comment from Rahul that led me to some positive and intriguing reviews. The book is relatively slight, and maintains an admirable focus on the reliability of memory: the stories we create and tell and improve about ourselves, our friends, and our relationships. It was a fairly brief and easy read, but the kind of book that deserves to be lingered over.

Sense of an Ending is narrated by a character named Tony, and encompasses most of the span of his life, from his school years through his late fifties. It isn't a comprehensive novel, though, and focuses on a core group of friends he had at school, and one or two romantic relationships. What's interesting is to read the narrator's own musings over what to include in this story and what to discard as irrelevant; there are many novels that he could make from his life, and he tries to focus in on this particular story that he's telling.

There's a strong through-line of memory and history that starts in the book's very earliest pages, when the boys share a history class and are challenged by their professors to think about what exactly constitutes history. Is it just the lies written down by the winners? The sorrows of the aggrieved? The boys reminded me a lot of myself in high school, particularly as they consider philosophical implications. When a classmate commits suicide, they begin wondering if and when this raw, shocking, emotional act will transmute into the dry, clinical fact of history.

Throughout the book, the narrator is constantly second-guessing his own grasp of this personal history. He's pretty sure that Finn said something, but acknowledges that it could have been someone else, or perhaps Finn said something else entirely. He's particularly aware of how later events color his recollection of earlier moments: he might remember feeling jealous when two people hit it off, but then will wonder whether he actually felt jealous in that moment, or if he's just remembering the sense of jealousy that he felt when replaying that moment in following years. Interestingly, this is at least as pronounced when there's something more tangible than his own memory available. He has a photo of a day that he spent with his friends and girlfriend, and will stare at that photo, forty years later, trying to understand what it means. Is he smiling in that photo, or grimacing? Is his girlfriend standing far away from another friend because she's attracted to him? He recognizes that it's impossible to fully recover the past, but he can't help examining it and trying to get it right.

The most amazing part of the novel, though, comes near the end, when Tony finally makes contact with Veronica again. Even though he had written so much about his uncertain recollections (particularly the devastating and fascinating way in which he considers their level of intimacy, along with the requisite second-guessing as to how she remembers it), I was still treating him as basically a reliable narrator: sure, he wasn't perfect, but he was the most dependable source we had.

Well! The bombshell comes when, after a long and acrimonious (if occasionally amusing) set of exchanges, he receives one of his own old letters from Veronica. It is absolutely devastating. It covers an incident that we thought we already knew, when she started dating Adrian; Tony had already described how annoyed he was at receiving a formal letter from Adrian informing him of what was going on, and had described the overly casual postcard he had sent in return, after which time they never spoke before Adrian's suicide. But now, what we had thought was a closed incident safely in the past comes rushing open. Tony had written a second letter, a damning letter, full of bile and hatred, writing the most awful things imaginable, all of which are painfully reprinted in their entirety. And, somehow, he had completely forgotten that he had done this.

It shocks him, and shocks us. It seems impossible for something this monumental, which preceded such tragedy, to be forgotten. And yet, the more I think about it, the more I begin to accept that it could have happened. Most charitably, Tony could have been drunk and/or reeling in emotional grief, and lost his memory of this epistle when he recovered himself. It's also very possible, though, that he deliberately put it from his mind: it clearly doesn't at all match the image of himself that he portrays in this book, and on some level, conscious or subconsciously, he may have tried to excise it from his history. (Which raises another interesting, and even less answerable question: if this is something he forgot along the way, when did he forget it? Before or after the suicide? If after, it seems like his sense of guilt must have been enormous.)

So... that seems like the big twist of the novel, which left me unprepared when the big one exploded in the last few pages. We learn that, no, Tony really just did not get it after all. And I for one feel pretty stupid for not having figured it out - it nicely explains everything about the bequest and the new characters that seemed strange. It's sad, and embarrassing, and horrifying, but also carries the instant application of decades of separation between the deed and the discovery. What does one do in that situation? Apologize for the bad man you were in your youth? So he did, but it can't begin to address the permanent consequences of his transient meanness.

"Sense of an Ending" is a perfect title in many ways, but to address the ending in particular, "a sense" is exactly what we get. There isn't a dramatic climax, no final emotional confrontation between Tony and Mary, but the crushing realization of what has happened arrives with such force and suddenness that it provides, well, a sense of an ending.

I don't always identify with characters in books that I enjoy, but I do feel a particular resonance when I encounter protagonists who remind me of myself. Tony's life is very different from my own, but I immediately recognized the process of self-reflection, of teasing out the story of your own life, and curiously trying to reconstruct how you became the person you are. I have a strong tendency (and reading this book makes me think this may be a human tendency) to interpret my past in ways that align with my present. For example, for many years I thought that I had always enjoyed school, before I was gently reminded that I actually hated the early grades of elementary school. I probably didn't spend as much time programming as a kid as I think I did, but it's a strong story that helps explain why I'm in my current career and so I tend to focus on those memories.

I also empathize with the cringe-worthy experience of recalling things I did or said in the past that I now regret. These days I try really hard to be kind to people, and I shrivel up inside when I remember the very unkind things I did when I was a kid. The narrator includes an illuminating digression on the etymology of the word "remorse", which literally means to chew again. I had never considered it before, but it's a perfect explanation of that word: when we feel remorseful for past actions, we chew over those scenes in our mind, worrying over them like a dog worries a bone, inflicting fresh sympathetic pain on ourselves with each bite. We can never truly atone for our past sins, precisely because we are no longer the same person who committed them, but we still feel an attenuated responsibility for them that we can't let go.

That all sounds melancholy, and there is a melancholic and elegiac character to much of the book, but for the most part it's an interesting, fascinating tale. It deals very explicitly with a few fundamental concepts that underlie every day of our lives and every work of fiction we encounter. I can definitely understand why it's received so much praise.
Posted by Christopher Charles Horatio Xavier King III, Esq. at 7:33 PM