I treated myself a while back to The World of Thedas, a beautiful book that collects much of the lore and concept art for the Dragon Age franchise. (I also treated my brother to the same book in honor of his birthday, but I utterly fail at USPS, and so this post was sequestered for nearly two months!) It was a bit pricey, but absolutely worth every penny: from the gorgeous presentation to the high-quality materials to the extremely well-written prose, it's a fantastic addition to my growing trove of Dragon Age treasures. 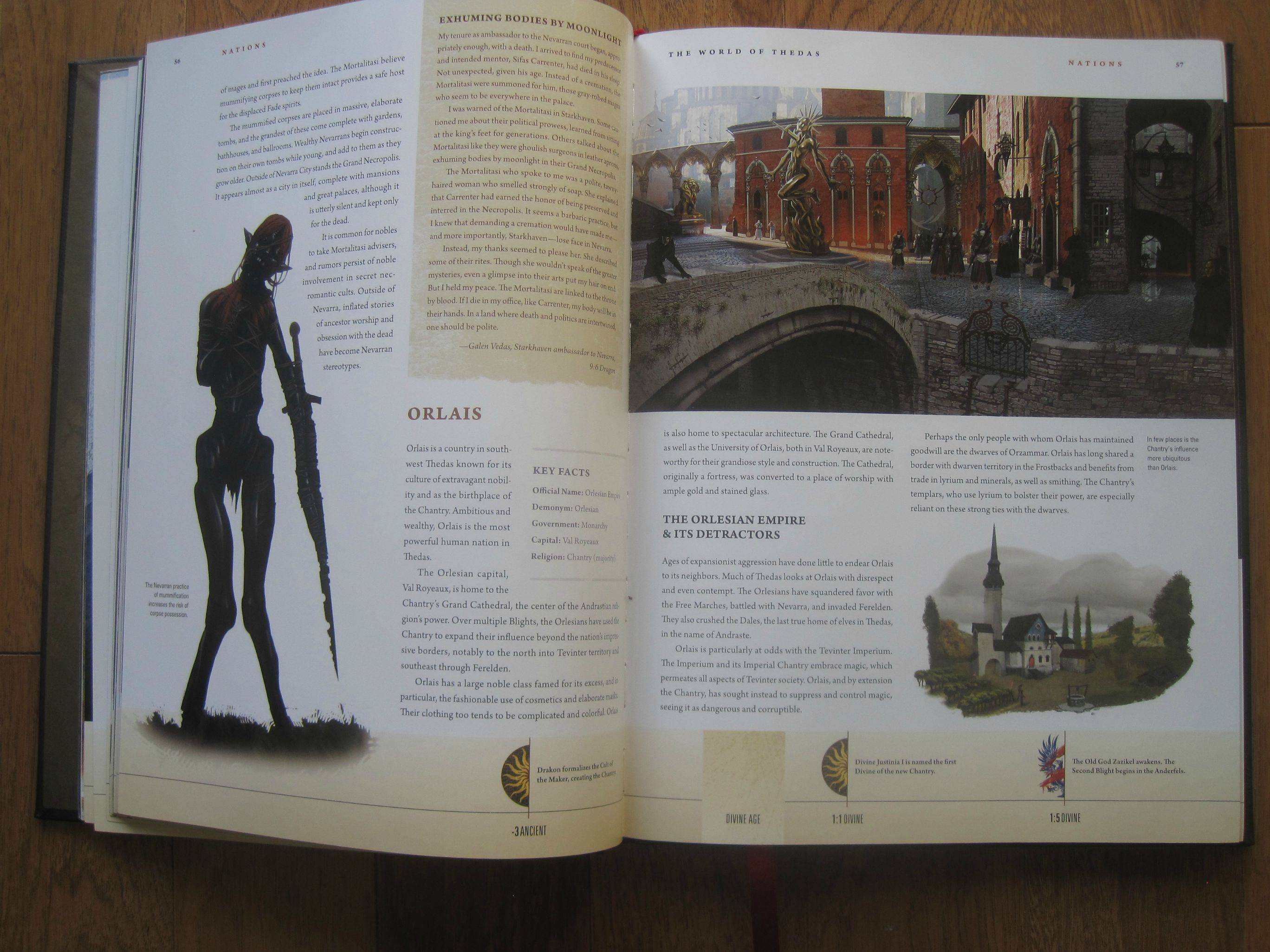 I guess I'll start with the writing, because that's the part that most exceeded my expectations. This isn't a dry dump of information, but a very thoughtful presentation of the world's mysteries. The perspective is from someone within Thedas, writing about their own history, not from someone from our world writing about a fictional world. Like in writings about our own world, the book has high confidence in the accuracy of recent events, and the further back in history you go, the more it relies upon hearsay, rumors, and legends.

The book presents these in a really interesting way. Depending on the section of the book you are reading, you will hear a different interpretation of certain major events or ideas. For example, all people agree that the Black City lies at the heart of the Fade, because multiple people can see and verify that fact for themselves. However, the explanation of what, exactly, the Black City is will vary between different perspectives. The dominant orthodoxy, put forth by the Chantry, teaches that the Golden City was once the home of the Maker; when the Tevinter magisters sought to enter it, the Maker left, and the abandoned city is now black from the magisters' sins. However, the pre-Chantry Imperium believed that the City was once the home to the seven Old Gods of the Imperium. And the Elves believe that the City is the current prison of their own imprisoned deities. The book never definitively explains which of these theories is "true."

After finishing the book, I feel like it draws equal inspiration from The Histories by Herodotus and A People's History of the United States by Howard Zinn. Like the former, this book casts a wide eye over a variety of cultures, histories, and religions. The author dutifully reports the tales he has heard, even the ones that contradict one another. He will explain what things he has seen with his own eyes, and may speculate on which claims seem to be backed up by evidence and which are not. He enjoys a good story, but won't invent stories of his own. Like the latter book, The World of Thedas has an often conversational tone, and the body of the book is regularly broken up with quotes from regular people. Some are important political figures, others slaves or peasants, others heroes and scholars. These help give a great deal of color and texture to the world: you aren't just learning names and dates, but getting a feeling for what it would feel like to be an elven slave in the Tevinter Imperium, or to play the Great Game in Orlais, or to confront abominations as a Templar.

If you want names and dates, though, this book has 'em! There's a comprehensive timeline that runs the entire length of the book in the bottom margin. This covers the entire sweep of known history, from the founding of Arlathan past the recent events of Kirkwall in Dragon Age 2. This really helped me put events into perspective (comparing the early Blights that lasted a century or more with the recent Blights that were relatively quickly ended), as well as get a better understanding of the ebb and flow of power between the various nations in Thedas.

I don't think that there's very much new information in here, in terms of raw data; most of the knowledge in the book has been presented before, either in codex entries or novels or conversations. However, much of it feels new, simply because you're able to pay attention to it and see how facts are related to one another. I feel like this is particularly true for the Tevinter: we've heard a fair amount about them, but had almost no direct contact, and so the bits and pieces we've heard (Old Gods, dragons, slavery, the Black Divine, etc.) don't carry the strong associations that we have with more familiar topics (Mabari, bards, the Arishok, the Fade). The book also excels at providing more flavor for things we thought we knew: the experience of life under the Qun, the chaotically piratical Felicisima Armada, the conversion of Archon Hessarian.

Personally, I read the book from cover to cover, and it reads well that way. Each chapter covers a separate topic: Races, Nations, Religions, The Fade, Blights, etc. They vary in length, with Nations being by far the longest. Every single page is a treat: some prose that continues the main thread of the chapter, gorgeous illustrations, the timeline, and often some side-bars that either quote from an authority (Brother Genitivi, a favorite of mine, makes a few appearances) or go into more details on a particular topic. The graphic design is excellent, and reminds me a little of "America: The Book." Because of this, I think that the book is also incredibly browse-able: you could pick it up, flip to any page at random, and have something interesting to read and engaging to view.

And, man, the artwork - it's incredible! They've included a ton of concept art pieces, going back about eight years. Some of these will show character designs - there's a great piece that shows a male and female Kossith side by side. Often they show impressive landscapes, which range from the gorgeous to the blighted. There are also about a half-dozen full two-page spreads, which are phenomenal, the kind of thing you'd love to hang on a wall.

I was pleasantly surprised by the variety of art styles on display. The Dragon Age games have a cohesive aesthetic, and I'd kind of assumed that Bioware must have a "house style" that their various artists used. That may be true when producing assets, but for concept pieces, there's a broad range of styles used by the artists. A few are very realistic. Some (particularly a couple of Fade pieces) look a bit like collage. There are some wonderful impressionist works. Others have a slightly cartoony look. I love them all! Thedas is a wide and varied land, and it's perfect to have so many different looks in the book.

If I had to pick a favorite piece of art in the book, it would probably be "The Harrowing", which depicts a young mage undergoing her trial. It's beautifully drawn, incredibly evocative, and feels like it's poised on the edge of a knife: a whirling mass of a malicious spirit spirals menacingly towards her; on second glance, though, you see what appears to be a benevolent spirit, reaching out from the front of the roiling purple mass, his hand inches from her shoulder. Is he seeking to warn her? To trick her? What will happen when they touch? The picture is filled with menace and beauty, and just a sliver of hope. I adore it.

There's tons of other great drawings as well, of course. The two-page spread of a towering statue of Andraste in a Chantry temple is stunning, with a strong red tone that seeps through the work, and an interesting interplay of light, between the mass of candles in the foreground and the powerful sunlight pouring through tall windows in the background. If one wanted to, one could make an observation about the utility of man-made light and faith, and how it is ultimately incomparable to the splendor of God-made light and truth. Or, also on a religious theme, there are many examples of Chantry art: impressive (and surprisingly bloody) stained glass windows depicting the life of Andraste, and a terrifically clever triptych, shown both in closed and in opened positions, which reminded me a bit of the Isenheim Altarpiece. Or there's the simple beauty of a Ferelden landscape, showing its beautiful green hills and a lone adventurer striding off to meet her destiny.

Because I sprang for the Collector's Edition, I lucked out and got a signed lithograph. It's yet another great picture of the Fade, and comes in a very handsome red portfolio. It's just a part of the fantastic packaging on this thing: it comes in an enormous box, weighing nearly six pounds. The inside is lined with a red fabric. A red ribbon ties the portfolio shut, and keeps the massive book in place. The book itself has an intricately designed cover, with a gold dragon sigil inset in an embossed black pattern. The page edges are gilt, which I typically despise, but actually works pretty well for this book. The book itself is massive, each page about 13" by 10" big. That makes the two-page spreads even more impressive, and even the more information-rich pages never feel too crowded. The book is less than 200 pages long, but feels fully satisfying.

By the time you read this, there's a very good chance that the Collector's Edition will be sold out. You can also buy the book from Amazon, at a much cheaper price. This doesn't have the incredible packaging and lithograph and stuff, but the actual book contents should be exactly the same.

Finally, I wanted to write a little bit about canon. I've mentioned before that I've really enjoyed the video tie-ins to Dragon Age, but haven't been able to get into the comics because of how their canon differs from the one I created while playing the games. I'm happy to report that The World of Thedas is extremely canon-friendly. It does cover events from the first two Dragon Age games, and makes their importance clear; but is written cleverly enough that you should be able to incorporate it into your own experience regardless of the choices you made.

I imagine that most people who want to buy this book are already Dragon Age fans, and people familiar with the series will probably get the most out of it, but it's an attractive and well-written book that could conceivably appeal to fans of speculative, world-building fiction, or to people who are interested in the games but haven't picked them up yet. In case you fall into the last category, here are a few words of caution:
So, yeah. I think the book is a must-buy for people who are interested in Dragon Age lore; it's probably my favorite ancillary purchase to date. I don't think it spoils anything about Dragon Age 3, but it does a wonderful job of fleshing out the areas we expect to see in the next game (like Orlais!), and gives some fascinating insight into previously-mysterious topics like life in the Tevinter Imperium. It's even better than I expected, though: between the terrific artwork and the really thoughtful point-of-view narration, it's one of the best books of its type that I've ever read.
Posted by Christopher Charles Horatio Xavier King III, Esq. at 6:37 PM