I grabbed Shadowrun Returns as soon as it arrived on Steam, and am now a couple of hours into the official campaign. I'm sure that I'll do one of my standard verbose write-ups after I finish, covering the plot and strategy and such, but there's enough curiosity around the title now that I figured I'd throw in my two cents' worth. There aren't any spoilers in this post. 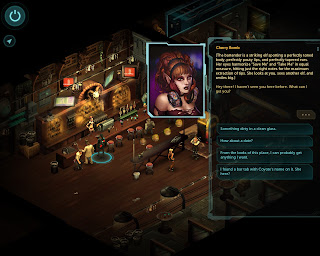 I've played the SNES, Genesis, and CCG incarnations of Shadowrun, but never played the pen-and-paper RPG nor read any of the books. I really enjoy the games I've played, particularly for their atmosphere. I was a Kickstarter backer of the game, and have followed its development somewhat closely.

If you've played other tactical turn-based shooters (like X-COM or Fallout 1-2), or one of the earlier video game adaptations of Shadowrun, you'll probably want to change the game difficulty to "Hard" instead of "Normal." After reading online about the difficulty, I've played as Hard from the start, which has made combat nicely challenging but hasn't caused me to die once yet. Normal might be good if you're new to the genre, though, as it will probably let you get away with more mistakes.

If you haven't played any version of Shadowrun before (or only the SNES game), be warned that magic and technology in the same person do not mix. If you want to be a mage or shaman, don't invest any points in Decking or Rigging, and never get any cyberware. The game lets you mix stuff up, which is cool, but in almost every case you're better off not crossing the streams.

Writing. This was the single nicest surprise for me. The game has a cohesive and very appealing narrative style, which is mostly a hard-boiled noir tone, mixed in with small elements of punk, cyberpunk, and dark humor. Characters' speech and the in-game exposition are really well-crafted.

Dialogue. Yet another nice surprise. I don't remember reading a whole lot about choice-and-consequence during SRR's development, but they're ahead of the curve in crafting an engaging, reactive plot. This is an old complaint, but most modern RPGs have unfortunately succumbed to losing the "role-playing" aspect of RPGs, and one major aspect of that is that in most games, the point of any conversation is just to visit every node on the dialogue tree. In contrast, SRR harkens back to the more complex, nuanced, and risky dialogue of games like Fallout 1 and Planescape: Torment. Picking certain conversation options will tick off the other person, which might prevent you from learning some crucial information or gaining certain items. I wasn't expecting this level of depth, and am really enjoying it.

Art. One of the early decisions Harebrained Schemes made was to combine 3D character models with 2D backgrounds, and I think it paid off extremely well. The backgrounds look fantastic, very lush and real; if I have one complaint there, it's just that they look so real that I wish I could interact with them more. The NPCs also look really good. Similar to old-school RPGs like Baldur's Gate, each speaking character has an in-game model but also a detailed portrait, and the portraits look fantastic. I really wish now that I had sprung for one of the higher Backer levels that would have put me in-game as an NPC, just because I would have loved to have one of those avatars. Anyways. It's much better-looking than is typical for a $20 game.

Music. One of the Kickstarter stretch goals let them bring on both Marshall Parker and Sam Powell, who created the music for the SNES and Genesis games. This was a great move. The music for SRR is all original, but very evocative of the older games' music, which in turn triggers all sorts of great sense memory in my brain. It's perfect for the setting - moody, atmospheric, occasionally sinister.

Combat. I don't play a ton of these style of games - I still haven't tried the new XCOM - but I'm really digging it so far. It's fairly puzzle-like, as you try to figure out where to place your characters, how much you're willing to risk, etc. The element of chance adds a lot of tension to the game. I've already missed one 99% shot, which bummed me out. It's cool, though. The combat is actually very different than in SNES or Genesis, both of which were real-time. The SNES version's combat was miserable, awkwardly using a mouse-style cursor that you had to control with your gamepad. The Genesis version was a bit better, and featured target switching, but I still far prefer the turn-based version here. (It's also nice that you can directly control your Runners now, unlike in previous versions.)

Ruleset. Shadowrun is now coming out with 5th edition rules, but SRR is based on a modified version of 2nd edition, which was the version used by the SNES and Genesis games. So, if you played either of those, it'll be quick and easy to adapt to them here. There are some new elements, though, like Riggers and Physical Adepts, which is really cool. Anyways. A good game design is all about presenting interesting choices, and I'm constantly questioning the best way to spent my limited Karma as I shape my character.

The Matrix! I actually just finished my first mission that included a full-on Matrix portion, and absolutely loved it. The design is really excellent - in previous Shadowrun games, a Matrix run was a stand-alone thing one Decker did while the rest of your team sat around and watched. In SRR, though, it's very well integrated into the rest of the game. In my case, I was playing a Decker who shot down a keyboard jockey, then jacked into the Matrix, then helped bring down [PLOT DATA REDACTED] while my team protected his prone body. Time moves more quickly in the Matrix, but still takes time, so there's a fun sense of pressure to wrap up your objective so you can rejoin the fight. I'm so glad that they fit this in!

Saving. This seems to be the number-one complaint in user reviews that I've read so far. I can sympathize with it, but I also see some benefit to the way it's currently set up. Honestly, if I could save any time, I'd always save before the start of every conversation, and if I didn't like the way it turned out, I would re-load and try again. Over the long run, I think the current approach is much more immersive, and lets me focus more on having fun and less on min/maxing outcomes.

Bugs. And not the fun Chicago kind, either! Actually, maybe I should just say "bug", since so far I've only run into one, but it was annoying. At the end of a fairly complex fight, where I'd made extra effort to achieve the result I wanted (zero civilian casualties!), a plot-required NPC failed to spawn. I ended up wandering around the map for about five minutes before checking out YouTube, realizing the mission was bugged, and then re-starting. Fortunately it ended correctly the second time, so it wasn't a game-breaking problem, but it was still annoying.

Loading times. It can take a surprisingly long time for the game to even bring up the main menu, and each map takes a while as well. It isn't awful - not as bad as the interminable loads on Mass Effect 2 or Civilization V, for example - but it's quite a bit longer than other recent, high-resolution, large-scale games I've played like Mass Effect 3 and Bioshock Infinite. Eh. Maybe it just means it's finally time for me to look into upgrading my PC.

Audio stuttering. Can you tell that I'm digging for things to add to this section? Anyways - the sound and music are usually great, but I've noticed that if I switch between sections in the menu, the audio hiccups or stutters for a bit. Hardly a big problem, but another thing that's a bit annoying.

... well, you'll have to wait for that. So far, though, my experiences have been very positive! And I haven't even checked out any of the user-generated content yet, but have already heard good things about some of the existing modules, including a fan-made remake of the SNES campaign, and several works based on existing Shadowrun novels. From what I understand, the main campaign is just about 12 hours long, but it looks like I'll have plenty more Shadowrun goodness to look forward to.
Posted by Christopher Charles Horatio Xavier King III, Esq. at 9:23 PM