The Devil Makes Us Sin

Aaaaaa Luther is back aaaaaaa! 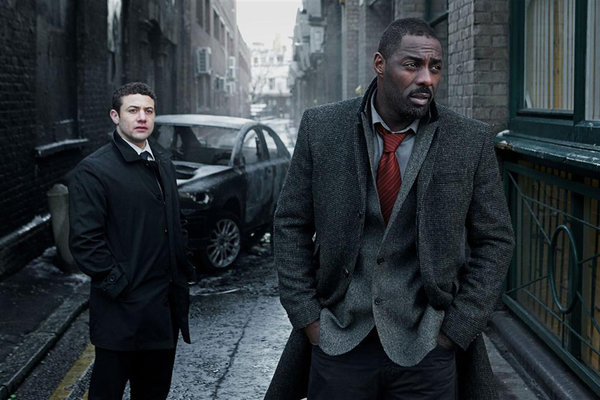 (I know, that screenshot is from Season 2, but I like it.)

I love this show so much, and it's a bit hard to explain why. It's much darker and more violent than most of what I watch. A one-sentence summary of the show makes it sound like the most cliched thing ever: "A cop sometimes needs to break the rules in order to bring criminals to justice." And yet, the incredible performances, tight pacing, and surreal crimes makes it a mesmerizing work of art.

I've noted this before, but the show benefits immensely from its adhesion to British show norms. An American cop show with the same concept would quickly devolve into a procedural that presses the reset button at the end of each episode, or else a soap opera. With only four or six episodes a season, though, Luther can't NOT shake things up, radically changing its cast list, mood, and character arcs each season. It ends up being much more like a really entertaining series of films than a television drama.

That movie analogy has been even more pronounced as the show continued. The last two seasons (of three total!) have each essentially been two two-hour-long movies, each divided in half into two hour-long episodes. I've also increasingly noticed some very fine direction and practical effects that elevates the show above the occasionally-cheesy production values that plague other BBC productions. This isn't QUITE up to the levels of Sherlock, but it's in the same zone of visual quality.

As a side note - one of my little fascinations with Luther is its portrayal of British attitudes towards crime, crime-fighting, and civil duties, and how different they are from those in America (both in reality and as portrayed in our own cop shows/movies). I'd remarked before in S2 how odd it felt to watch scenes where a bad guy was running through a heavily crowded area, while being chased by police, and see that absolutely nobody would make an effort to stop the bad guy. It felt like the civilians had a clear understanding of their role in life, which was to keep their heads down and ignore anything that does not directly involve them. In contrast, any American show would have at least a couple of impromptu heroes jump in to try and help out. (Depending on the show, they might get shot for their troubles.) I've wondered if this might be directly traceable back to the difference between the British concept of "Duty to Retreat" versus the American focus on concepts like "stand your ground." In fact, a recurring concept in Luther is that of the vigilante, and the London police have no tolerance for them. Batman need not apply. The final two episodes of this season tackle that concept head-on, particularly in Episode Three, and we get some charismatic words in favor of a more muscular, American-style active citizenry. Anyways. We're obviously not meant to support this, but I'm very curious if American and British viewers have different reactions when confronted with the idea of an armed vigilante interrupting crimes with extreme violence, and if the British find it less tolerable than we would.

One of my few hesitations (I won't say complaints) about S3 is its use of social media as a plot device. It isn't actually bad, but does feel a little too trendy. I get the feeling this is something that will date these episodes in a few years, while the earlier episodes are more timeless. Still, for what it is, it's done rather well. It's hardly original to worry about the blood appetites of an anonymized public, and the show ties in concepts that seem borrowed from American Idol, Running Man, and The Hunger Games, casting a pretty bleak view on our current culture. I would expect no less from this show.

I'll get the bad news out of the way first: there's entirely too little Alice. There's a subtle and very welcome nod to her early in the first episode, which makes me miss her a great deal. Luther is still a great show without her, but she provided such an incredible, unique energy that hasn't been replicated since she left for America. (I remember reading a while ago about a proposed spin-off featuring Alice, which I absolutely would have loved, but am pretty sure won't happen. I'm also probably never going to see my desired incarnation of the show where Luther and Alice join forces as super-criminals, traveling the world, stealing priceless artifacts, and befuddling police everywhere.)

Season Three finally crosses that vague line separating thrillers from horror. It's skirted close to that line for the show's entire run, notably in episodes like Season 1 Episode 3, but it now embraces full-on bogeyman mode. Of course, it all stays scientific and realistic, and I can't decide if that makes it more or less frightening.

This season has stepped back a bit from S2's interesting angle of featuring villains who appeared absolutely ordinary, the sort of people you'd never look at twice if you passed them on the street. The second villain is pretty tapped into the public, but sees himself as more of a martyr or a demagogue, and not "the spirit of London" in the way that a character from S2 seemed. Anyways. The big S3 villains are all very different from one another, and also different from the characters we've seen previously on the show.

Compared to earlier seasons, there's a much stronger institutional adversary against Luther from within the force this time around. Schenk kind of played this role in S1, and Erin Gray in S2, but both were, frankly, a bit ineffectual... enough to raise tension, but not enough to seriously threaten Luther. This time around, Stark is a huge danger, mostly because, unlike past opponents, he isn't content to merely confront Luther on a professional standing. Stark is ready to wage total war, meaning he's willing to fight as dirty as Luther and strike out at vulnerable targets when he can't reach the man himself. Watching him was infuriating, exactly as the show creators must have intended.

This whole season was pretty good, but by far my favorite episode was #4, for the obvious reason that it marks the return of Alice after being gone for pretty much the second half of the entire series. I felt like cheering when I saw Ruth Wilson's name pop up on the opening credits. I was a bit nervous before she appeared: could she possibly match my ridiculously high expectations? Would a show that thrives on so much change feel compelled to irrevocably damage her relationship with Luther? After getting used to the new look of her shorter hair, I was once again beguiled by this awesomely unhinged woman. She gets the best lines of the episode, which are some of the best of the series. "Some little girls grow up wanting ponies. I always wanted to be a widow" was one of my favorites. She's possibly even more capable than during her season-one heyday, single-handedly saving Mary with incredibly cool aplomb.

Oh, yeah, Mary! I was pretty impressed with how well the show handled her. Zoe is such a huge figure in Luther's psyche, and I wasn't really expecting him to ever get a new love interest. Their initial meeting is a bit contrived, obviously, but I thought they did a good job at creating a believable scenario that would show how these two could fall for each other. I got pretty invested in their relationship, even while continuing to mentally ship Luther and Alice. Anyways. I liked Mary throughout the whole season, but thought she was particularly great in the finale: she's obviously under unbelievable stress, having never been in a situation like this before in her life, and yet she's able to struggle through her terror and do what needs to be done. Her final little sacrifice is one of the most admirable things I've seen on the show.

Little mysteries: what was on the sheet of paper that Benny handed Luther? I don't think we find out, but I think it can't be anything other than "Meep meep!"

I was really glad to see that Erin survived. I had assumed that she died, based on Marwood's previously demonstrated willingness to murder police officers. (It was hard with Ripley, but seems to be getting easier, which is a terrifying thought.) But, given how the shot happened off-screen, I should have anticipated it would be non-fatal. I'm left wondering if he shot her in the leg (mimicking his earlier disabling of Luther), or if he tried for a fatal shot and missed the vitals. Probably the former, given his survivalist training. And... well, given Marwood's motivation for embarking on this crusade, I imagine that he's less likely to kill women than men. Well. I'm curious if anything happens with Erin in the future (if there is a future to this show), but I can see her following a trajectory like Schenk, passing through an adversarial role to eventually become a loyal supporter of Luther.

Oh, but Ripley... poor Ripley! What a shame. I don't want to say "waste," since it worked very well, both from a dramatic sense (it was fully earned and gave an incredible propulsion to the finale), as well as an in-story sense (by sacrificing his life, Ripley single-handedly branded Marwood as a cop killer, instantly robbing him of his public support and putting an end to his campaign). That was still really hard to watch, though. Ripley has been such a constant in the show, and had such a great arc each season. He will be missed.

All in all, I was pretty happy with this season, and particularly with how it ended. Season One had a particularly powerful cliffhanger, and I would have hated it if the show had ended there. S2 and S3 have each ended at good spots, where there's still room to tell more stories in the future, but also would be a decent spot to end the show. I say that in spite of the huge ambiguities left at the end of the finale. Most particularly, will Luther choose to go with Alice, with Mary, or neither? Will he finally leave the force, as he's talked about wanting for the last two seasons? If so, where will he go? If not, how will his career progress in a post-Stark, post-Ripley world?

I do hope we get to see more Luther, in one form or another. Idris Elba is deservedly becoming more famous and popular, and I expect this will make it increasingly difficult for him to do additional series of the show. But, based on the little I've heard, it sounds like both he and series creator Neil Cross are very interested in doing a movie, which could possibly be a sort of prequel/origin story taking place before Season One. That would be pretty cool, even if it means no Alice character. And there still are periodic rumors of a spinoff, which could be very good indeed depending on who was involved. We'll see! This show has continued to be edgy, unpredictable, and darkly entertaining, and with luck we'll see that continue in the future.
Posted by Christopher Charles Horatio Xavier King III, Esq. at 8:45 PM