I was planning on starting this post later, but I find some unexpected free time on my hands since my online character has been deleted, so... here we go! 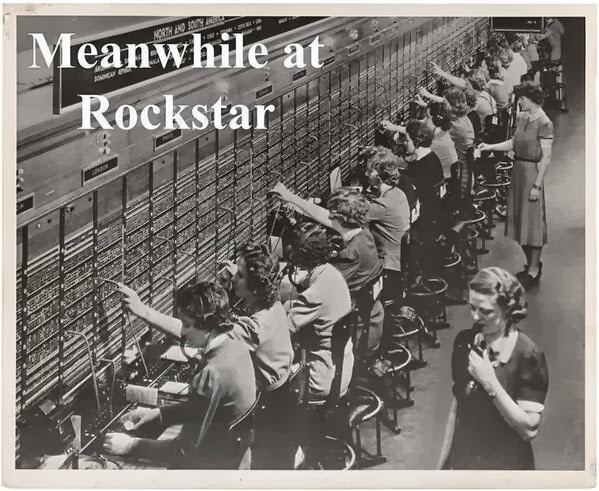 Needless to say, I am very bummed to have lost a character I have invested time and effort into. I've been pretty OK with the other problems plaguing the online launch, like periods where nobody can connect to the service, since those just stop progress. Actually losing progress, though, really stinks. I'll join my voice to the chorus of people recommending that you not start playing GTA Online until they finish fixing all their problems.

The whole situation is simultaneously familiar and absurd. There are always huge problems anytime a historically single-player franchise puts out an online component. The most obvious recent examples are Sim City and Diablo 3, but I still remember the howls of rage that accompanied BioWare's botched launch of Dragon Age: Origins.

At the same time, though... Rockstar waited a full two weeks after the game came out before enabling online mode. Even though the game sold better than expected, that should have been plenty of time to purchase additional hardware, run a closed beta test that could identify stresses on the system, and gotten stuff ready. Instead, they've been plagued by an array of problems, some their own, some the result of the Playstation Network or (less often) Xbox Live. (A recent theory I heard, which seems both like a tinfoil-hat theory and perfectly plausible, is that Rockstar deliberately postponed the online launch specifically to prevents review scores for GTA V from getting dinged by the online problems they knew would come. I can buy that.)

That said, in the time I may have wasted playing GTA Online, I did generally have fun. I've joined a small crew from a website I like; I don't know any members personally, but have run a few races with a couple of them and fooled around in the open world with another. I've always started up a private crew session, and I'm often the only person inside it, so I don't experience the full mayhem that a lot of folks are apparently experiencing.

Once the online game is worth playing, here are a few random tips from me:

One of the most pleasant surprises from playing GTA Online has been a noticeable increase in my skill at evading cops, which I'd complained about before. Partly this is because you never need to outrun them in a garbage truck, but there are other things I've picked up as well.

Phew! Man, I was having so much fun with this before it stopped working. Argh. That'll teach me for trying to play an online game shortly after launch.
Posted by Christopher Charles Horatio Xavier King III, Esq. at 9:20 AM