I finally finished season 5 of Misfits, the latest psychologically twisted British television show to sink its fangs into my imagination. It's a pretty incredible program, one of the most amoral, shocking, funny things I've ever seen. (And with a fantastic soundtrack, too! Despite the title, there's nothing from the band Misfits in there, but almost all of my favorite current bands are played at some point, and they pick really good cues throughout the show.) 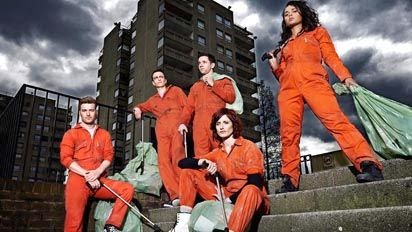 The premise behind Misfits is fairly simple. Its protagonists (not, despite what they occasionally think, heroes) acquire supernatural powers during a freak storm. However, they're all fairly rotten people: vain, antisocial, violent, disturbed individuals who have previously been sentenced to community service for committing petty crimes. What happens when these people get special powers? Well, they keep on being pretty much the same, except they can do more damage. They aren't organized or ambitious enough to become supervillains, either: they keep living petty lives, accidentally inflicting collateral damage on their surroundings.

It's hard to communicate how gripping and hilarious this is, so if you get a chance I highly recommend checking out at least the first episode or two to see if it's for you. (As of this moment, full SD versions of all episodes are available for free on Hulu, with ads.) In a post-South Park world, it's hard for a show to shock, but somehow Misfits manages to do it over and over again. That's probably at least partly because I continue to irrationally think that this time they'll step up and do the right thing, only to see them dig a deeper hole.

I keep harping on this, but one of the things I love most about British shows is the way they tend to evolve drastically from one season to the next. Most American shows spend their first season finding their voice and rhythm, then settle into a formula that proceeds, with small variations, for years. (Even something like the current season of Archer, which is being hailed as a reboot of the franchise, is keeping the exact same cast and relationships between characters.) Misfits changes a great deal over its five-season run, though, even by the standards of British television.

This is partly due to drastic turnover in the cast, which is consistent for the first two seasons and then starts shifting. Unlike some other shows, where actors decide to leave and then the show must scramble to come up with an excuse for why a character isn't around any more, the changes in Misfits are very easily explained: these are all people who just happen to be on probation, and once their probation is over, they are hardly motivated to stick around the community center, scraping graffiti for the fun of it. Plus they, y'know, live dangerous lives, and it's unsurprising that some of them end violently.

The original cast of the first two seasons is definitely my favorite, ironically because it featured the most hateable characters. Simon is unbearably creepy; Nathan is a quipping antisocial monster; Alisha is wholly self-centered. Just watching them interact with the world makes me squirm and chortle in equal amounts. The theme of the first season seems to be that people never really change: even when this big, life-altering event occurs, they continue being the same rotten people as before.

That starts to shift a bit in the second season. Simon in particular becomes convinced that they have acquired their powers for a reason, and inspires himself (and, eventually, others) to take more of a Spiderman attitude and apply their powers to affecting positive change. The world expands a bit as a result of this: at first, it seemed like only the workers at the community center were affected, but as the show's scope grows we gradually come to realize that this was a larger phenomenon that affected the entire town. The show becomes less driven by the characters' awfulness (though Nathan remains proudly ridiculous to the end), and more by their limitations: frustration that, even with their powers, they're still trapped in this town, in their lives, with their problems.

I thought that the first two seasons were rock solid: I highly enjoyed every single episode, and it didn't feel like there was a single stinker in the bunch. That was no longer the case for me starting with season three: the show can still hit high points (in particular, one time-traveling episode that creates an alternate timeline was one of my favorites of the entire series), but it was no longer the non-stop quality ride of before. That's partly due to the new cast: nobody is truly awful, but in terms of both powers and personalities, nobody is as extreme as the wild first cast. It also feels like the stakes are lowered considerably. Instead of facing threats that confront the entire town or country, the later seasons are much more personal, focused almost exclusively on characters' relationships and private demons.

It's still pretty good, though! If you enjoy the first two seasons, it's worth sticking around to the end, particularly since things start to perk up a bit more late in season four through the end after a great new character is introduced. If you only kind of like the show, it's probably best to wrap up with the Christmas special following Season 2, which provides a decent stopping point and is a highlight of the series.

Beyond the main cast, it was really amusing to see all the supporting characters shifting as well. There's a bit of a running joke in the show about horrible things happening to their probation officers. This slows down a bit later on, but their supervisors are some of the most vivid and amusing characters in the later seasons; in some ways, their last officer channels the most compelling elements of the original cast, with his deep strangeness, utter lack of shame, and near-sadistic tendency to inflict discomfort. Other supporting characters drift in and out of the main slots as they are sentenced to or freed from probation.

Favorite main character: Simon, with Abbey a very strong second.
Favorite probation worker: They were all really good! I was impressed at how different they all were. Shaun might have been my favorite, though. I loved his deeply ingrained apathy. "You're obviously lying...... but it's after five p.m., so I don't give a shit."
Favorite villain: Hm, maybe Rachel, the cult leader.
Creepiest Villain: Possibly the White Rabbit. The Scary was pretty good, too.
Favorite supporting character: Maybe alt-Curtis.
Favorite scene: While I wasn't a huge fan of the episode surrounding it, the rave in Season 2 was fantastic.
Favorite music: Too much to choose from! I fell even more in love with the show when I heard "Paradise Circus" playing; it felt like Misfits and Luther were two barrels of a shotgun into my heart. And Chvrches playing in the last season made the show feel even more contemporary.
Favorite plot twist: Superhoodie's reveal was pretty cool. I also really liked the realization of Curtis's flash-forward to themselves in superhero costumes.
Favorite death: The entire sequence of murdering zombie cheerleaders was incredible, culminating in the matter-of-fact execution of yet another probation worker.
Favorite ASBO power: Simon gets more mileage out of his invisibility than anyone else ever gets out of their powers. Curtis's time-rewinding is vastly overpowered. Finn's incredibly weak telekinesis was probably the most amusing.
Favorite villain power: I kind of liked the insanity of the milk guy, but Video Game Guy Vision was more entertaining.

From what I understand, the series is completely over at this point. It's a bit of a shame - while the first two seasons were the best, everything was pretty good, and it kept getting better near the end. still, they've had a good run, and it's a nice way to close out the series: the remaining characters expressing vague ambitions about doing something meaningful with their lives and their powers, and us remaining optimistic yet skeptical that they will actually do so.

It's a weird show, with deliberately unlikeable characters, but has been one of the most compelling things I've seen recently. If that sounds at all appealing to you, check it out!
Posted by Christopher Charles Horatio Xavier King III, Esq. at 8:19 PM