Hi! I'm gradually working through my backlog of books and stuff from the last few months. First up: Infinite City, an incredibly creative atlas of San Francisco created by Rebecca Solnit with the help of a wide group of talented writers and artists.

I received the book as a gift from my sister almost half a year ago, and have enjoyed gradually reading through it in snatches between my other projects. The form is perfectly designed for this sort of ad-hoc reading: each section contains a lush and highly detailed map, along with an essay of less than a dozen pages. Their general approach is to combine two seemingly unrelated themes on the same map, which forces us to both view the broad diversity and contradictions within the Bay Area, and also encourages our mind to reach for connections that we otherwise might not have considered. And so, you get juxtapositions like "Butterflies and Drag Queens" or "Trees and Murders". One map that particularly intrigued me, even before I started my serial reading of the book, was a map of the Mission District (where I work and often hang out) that showed its cultural institutions alongside its gang territory. In my white professional lifestyle, I pretty much never need to worry or even really think about gang turf, but it's part of the reality that underlies the place where I spend much of my life. It's also something that, while very real, isn't part of any physical map of our city that we would see. So, it was an invigorating, fascinatingly fresh way to learn something new about an area that already felt like home. 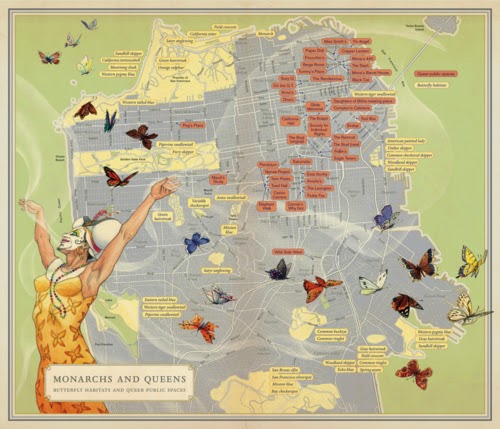 And, really, that's the major goal of the book. The lengthy, almost baroque introduction launches off from Italo Calvino's book Invisible Cities (which had been on my mind not too long ago), exploring the idea that any city actually contains an infinite number of refractions of itself: each person forms their own mental map of the city, made up from their own history and experiences there; some of our maps overlap with one another, but no two residents share the same map. The book is concerned, to a very strong degree, with the concept of our limits of knowledge: none of us can fully understand the lifetime of experiences held by another person, but we can benefit enormously from the attempt to do so. By catching glimpses of others' invisible cities, we can expand our own.

It was a fascinating book: the structure was rather breezy, but each section could delve surprisingly deeply (I have been entirely disabused of my belief the the Ohlones were pre-European natives in the Bay Area), and the prose tended to be a very deep shade of purple. The artwork is fascinating and beautiful; any one of these maps would be worthy of hanging in a home or office. Its concerns are hyper-local, but I thought that this very localism helps give it transcendent power, similar to how The Wire's inextricable link to Baltimore made it surprisingly universal. All that to say, while San Franciscans will probably feel the greatest charge from reading it, I think it holds the potential to fascinate pretty much anyone, whether you're interested in history, people, nature, or cities.
Posted by Christopher Charles Horatio Xavier King III, Esq. at 8:20 PM