Visions of the Surface

I appreciate many things about Failbetter Games, and one of them is how quickly they turn around their Kickstarter projects. The Silver Tree appeared only two months after its successful Kickstarter campaign, and I've recently started playing the Early Access version of Sunless Sea less than a year after backing it. In comparison, Torment: Tides of Numenera recently slipped back to the fourth quarter of 2015. (Not that I terribly mind - I'd much rather a game be done right than quickly - but I admire Failbetter's ability to do both.) 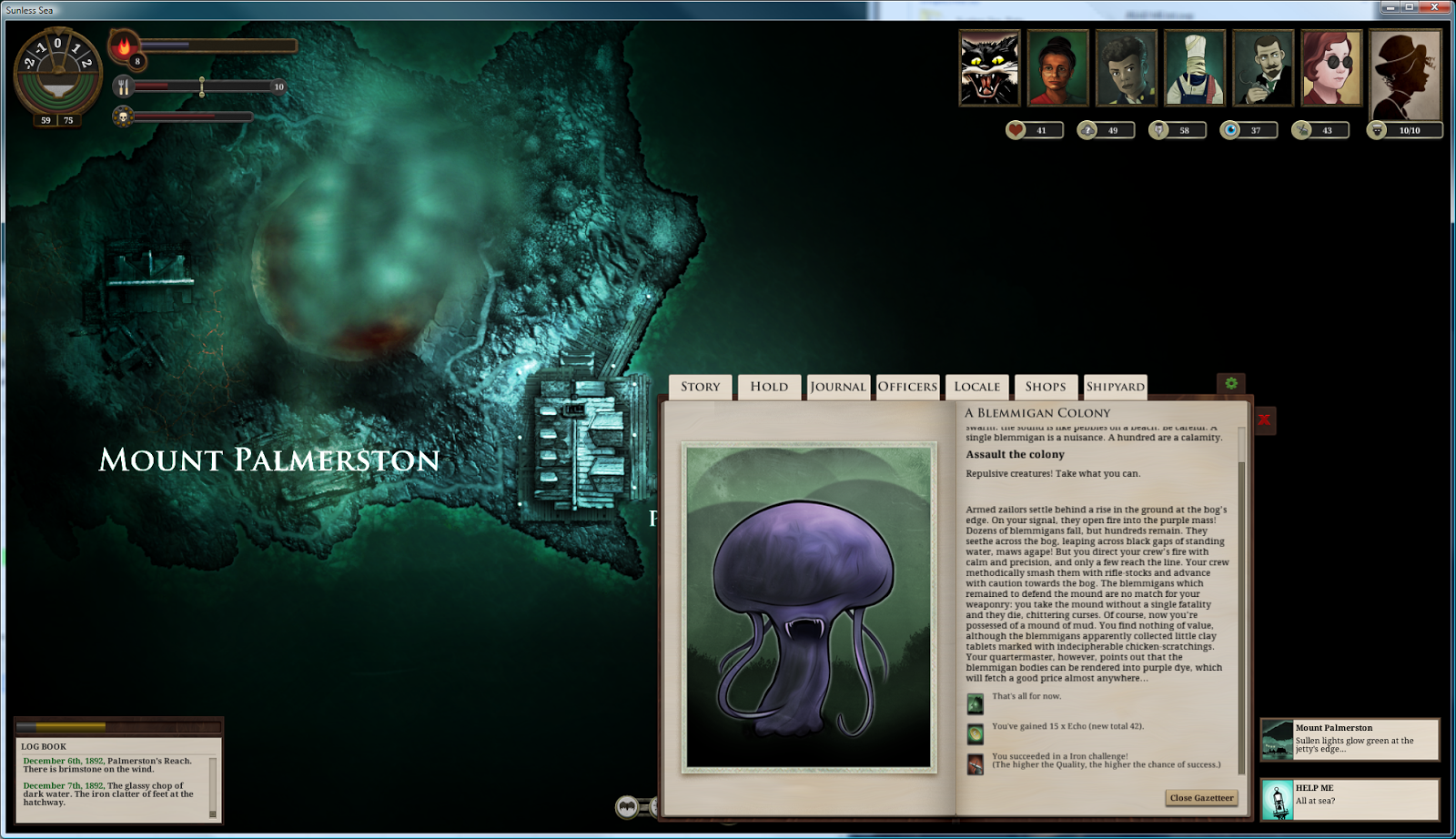 Sunless Sea is a new direction for Failbetter. Up until now, they have been exclusively known for crafting very well-written interactive fiction. They've developed a system, the StoryNexus platform, that allows them to make this more game-y than most other IF, which tends to follow the model of either "Choose Your Own Adventure" or "Zork". Their games feature beautiful bespoke art, which primarily serves as illustration to the text.

In contrast, Sunless Sea is a game-game. It combines a bunch of different systems: there's real-time exploration, a form of turn-based combat, short narrative chunks (some of which have branching storylines), and an economy that includes opportunities for trading. It was advertised as a roguelike with strong story elements, taking inspiration from games like FTL and Sid Meier's Pirates!, and so far it is living up to that description. I didn't back the project at a high enough tier to get into the beta, but all backers have gotten access to the Early Access, and I had a lot of fun playing with it over the weekend.

As a side note, there has been some controversy lately around Early Access games, where people buy games before they are complete and get to play them early while the developers finish them. There is some risk that games won't be finished at all, and you're definitely giving up the opportunity to read reviews and Metacritic scores before purchasing. I think Failbetter is taking a good approach to this... they've been focusing on the core mechanics of the game, front-loading the development of graphics, combat, illumination, etc., so what we're getting in EA feels like a more-or-less complete game. Over the next three months, they'll be focusing on building out the remaining content for the game: in concrete terms, creating the rest of the (enormous!) map, adding and completing more storylines, building more trading centers, etc. Of course, they're listening to feedback during this time as well, and will be adjusting things like combat difficulty and survivability.

I'm a bit reluctant to discuss any strategies or the like, since I'm sure things will change quite a bit by the time the game is finished. That said, here are a few things I've noted so far:

There are multiple resources to manage. The most obvious ones are Supplies and Fuel. Your crew eats Supplies at a steady rate. You consume more Fuel as your ship moves faster and when you turn on your ship's lights; you can hang out in a single spot for a while with your engine and lights off and stop burning any Fuel, but will still be losing a few Supplies. A less obvious resource is kind of an anti-resource, Terror. Your zailors are scared of the dark, and their Terror will increase when you venture into unlighted areas and as you stray further from shore. This reminds me a little of the Nightmares mechanic from Fallen London: it doesn't have much of an impact at low levels, but can cascade when it gets higher (you may begin having nightmares which further increase Terror). When it reaches 100, your game is basically over: your crewmates will go insane, jumping overboard and leaving you stranded and dead. There was a somewhat similar system in place for Pirates! based on morale, which kept any single voyage from continuing for too long.

That isn't the only way to lose, of course: you can also starve to death, have your crew mutiny, or be destroyed in combat. This is a roguelike, so you're expected to die somewhat frequently. Over time, I have come to get a better feeling for just how prepared I need to be when embarking on a voyage, how to minimize my zailor's Terror, and most importantly, that I should run away from combat with all but the easiest enemies. When you do die, the game lets you carry a legacy forward into your next game: one of your officers, a single stat, or your current map. So far I've been opting for my most-expensive Officer, which comes with a bit of a stat boost and opportunities to further upgrade my character. 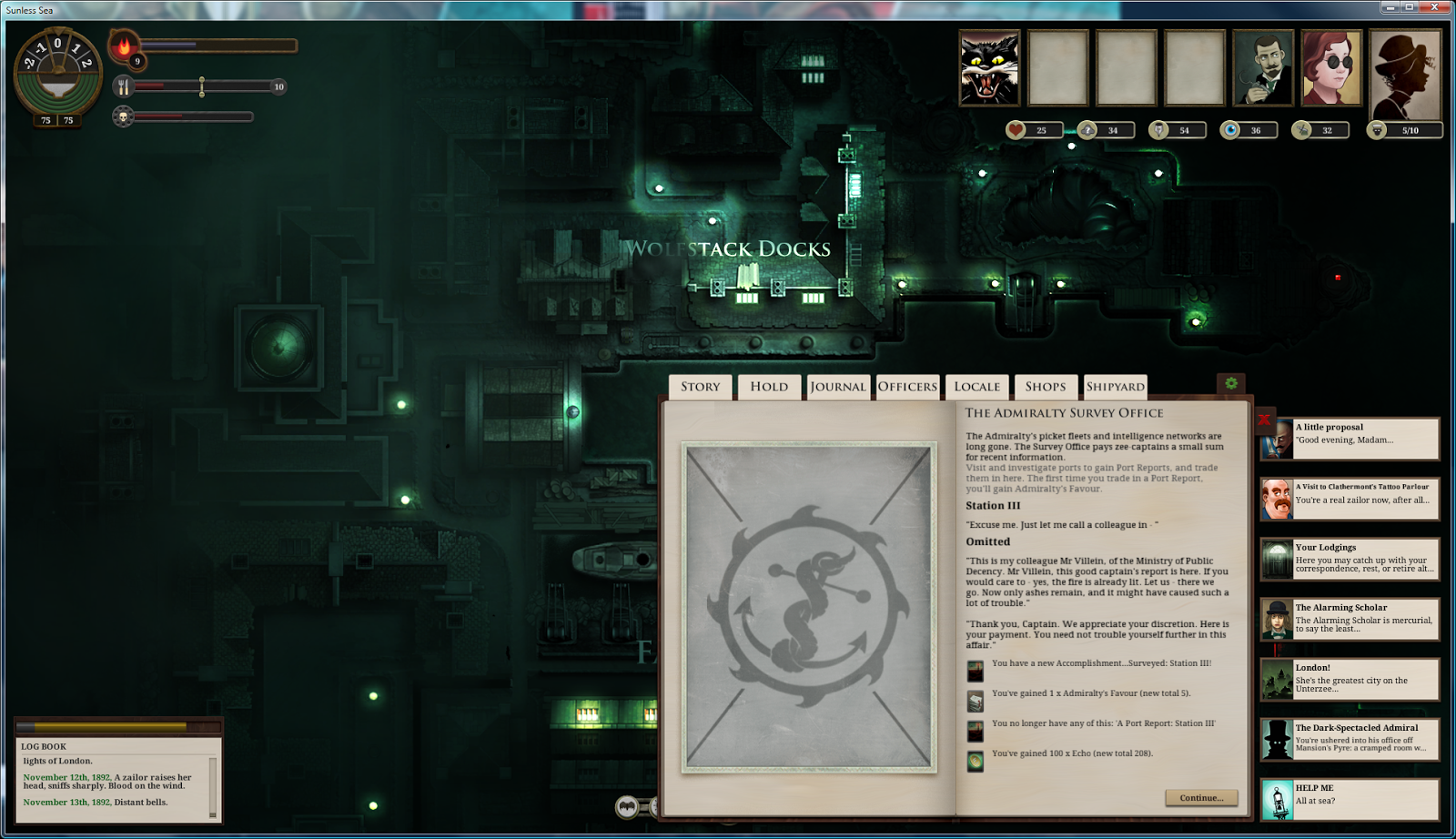 The most fun way I've discovered so far to play involves speaking with the Admiralty Office in London, which will send you on a mission to a specific random port to retrieve Strategic Information. I'll try to make a loop out of the trip, stopping in at all nearby ports along the way and collecting Port Reports from each, as well as whatever storylets they have to offer. Back in London, you can turn in the Strategic Information for 150 Echoes (the in-game currency), and each Port Report can fetch anywhere from 5-100 Echoes more, with most worth around 20-30. This is usually enough money to hire a new Officer, repair any damage I may have accrued, replenish any lost crew, and hopefully still have a bit left. After several hours of play on my most successful game yet, I've acquired a full slate of high-quality officers and upgraded my engines.

For trips to the north, I'll usually also offer passage to some Tomb-Colonists and engage in a little arbitrage (Prisoner's Honey to Venderbight, then Spider-Silk back to London). I presume that more trading ports will be added as the game continues further development, which will add more opportunities for side-profits along the way, although I'm fairly sure that pure trading will never be the best way to advance in the game.

So far, I'm really enjoying the game! The bones feel solid, and I'm eager to see how the story develops. Fallen London has been a very fun and surprising game, and so far it feels like Sunless Sea has captured much of the atmosphere and ambiance of that game while creating something entirely new to play. At this point, I think I'll probably keep playing my character as long as possible until her inevitable death, then maybe wait until September to play the final version. That should give me a few weeks to master the Unterzee until the Inquisition unexpectedly arrives.
Posted by Christopher Charles Horatio Xavier King III, Esq. at 8:14 PM