David Gaider recently posted a list of the 10 games that most strongly influenced him. I thought that sounded like fun, so I put together a list of my own!

The criteria of "influential" is a good one, which sets some different constraints from the more common and more amorphous "best" list. I tackled this many years ago, but enough time has passed that I thought it would be good to take a fresh crack at it. Gaider's original criteria is:


As someone working in the industry, and an avid gamer, what would you say are the games that influence the way you think about games today? The ones that have stuck with you, and which you hold up as the bar—either for their story, their gameplay, or their sheer fun factor—by which you measure other games you play?

Now, I don't work in the industry, and while I've fiddled around with making games (from QBASIC up through Shadowrun Returns campaigns), my output isn't nearly broad enough to be able to point to a wide array of influences. That said, I think a ton about games, and definitely have a measuring bar by which I judge new games. (Along the same lines, this list definitely skews more towards the genres I enjoy.)

Gaider's list includes only pre-2000 games; my own spills slightly past that, but due to how the question is framed, it still skews slightly older. Ranking these was hard and should be taken with a massive grain of salt.

With no further ado, here we go! 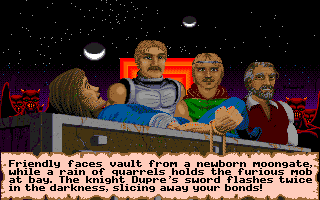 That's it! I'm sure that if you asked me again in a year this list would shift around somewhat, but all of these are games that live near the front of my brain, ready to be invoked whenever I am complaining that some more modern game has fallen short of the high achievements of the past.
Posted by Christopher Charles Horatio Xavier King III, Esq. at 7:02 PM