All Dragons Must End

Not a whole lot to say here, except that I've wrapped up my final run-through of Dragon Age 2! I've done the standard album thing: here are Mark of the Assassin, Legacy, and Act 3. Only scattered commentary this time, but still spoilerific.

A random technical note that I think I omitted last time: earlier this year I upgraded my monitor; I already had a decent video card, but I've been gaming on a 1024x768 LCD panel since the mid-2000s, so I've never had much cause to stress it.  Having a big monitor is really, really great! I also discovered that BioWare released a HD Texture Pack for Dragon Age 2, so I installed that before starting this playthrough, and, man, it looks fantastic! While the world itself isn't as broad or dense as Skyrim, it can often look just as pretty with these textures applied. (Interestingly, while almost all cut-scenes are done in-engine, there are a handful of cinematics, mostly near the end of the game, which are pre-rendered; while you would normally expect pre-rendered scenes to look better than in-engine ones, because these were rendered using standard textures, they actually look noticeably blurry in contrast to the in-game scenes.) 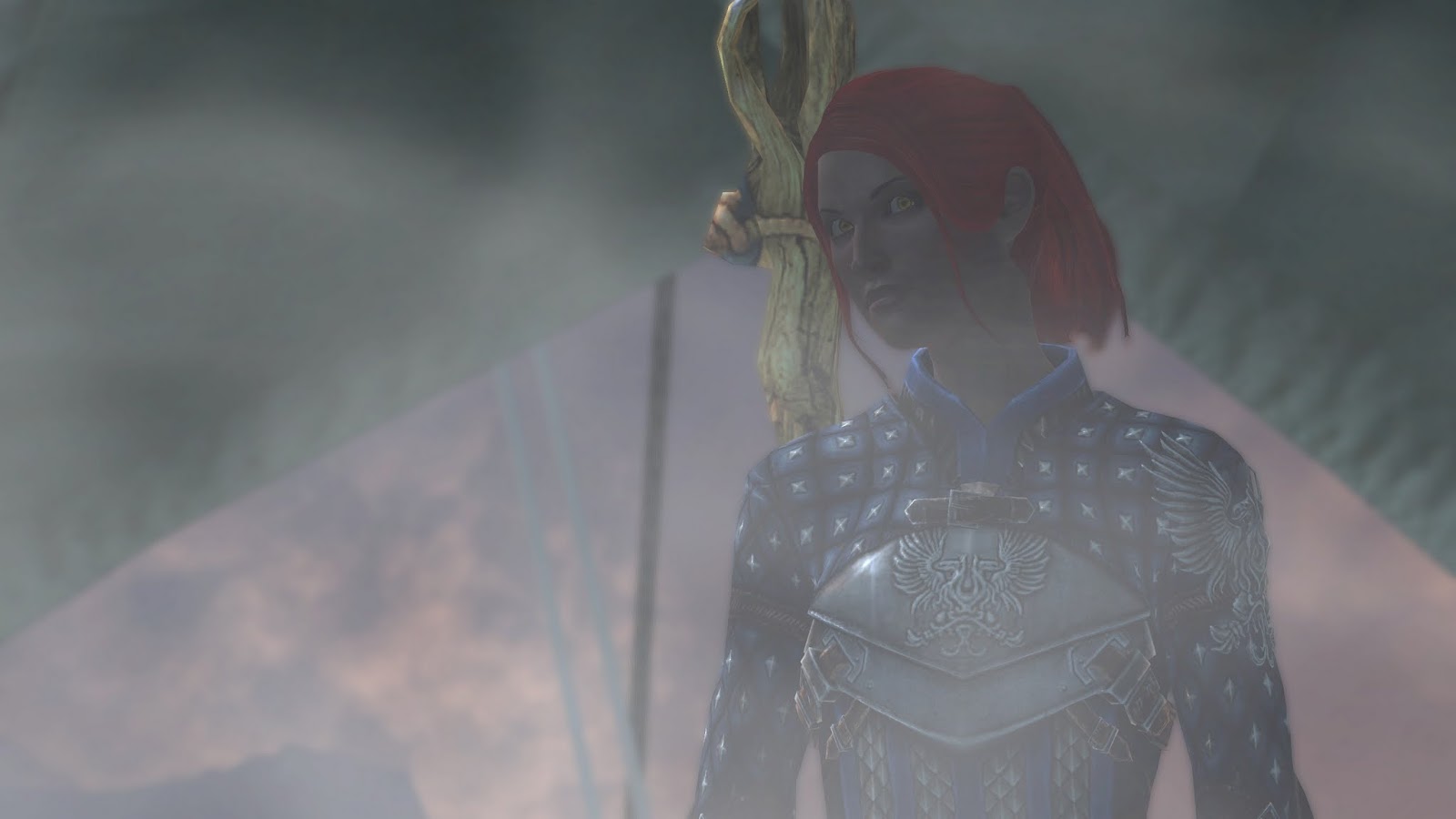 The Hard difficulty did prove to be quite challenging towards the end. Weirdly enough, the boss battles themselves went fairly well; most of them rely on knowing particular tricks, and once you have those internalized, they're just a matter of execution. Some of the tougher quest-oriented fights, though, proved extremely difficult. In particular, during Act 3 there are a couple of fights against Blood Mages, some of which I needed to retry about a dozen times before winning. Typically, at the start of the fight, the blood mage will almost instantly unleash an AOE spell that freezes your character in place and does massive draining HP damage; within a couple of seconds Faria and Isabela would die, and even Aveline and Merrill would be so far gone that it would be helpless to continue. The best bet seems to be to hit the mage quickly with an interrupting spell, like Winter's Grasp; this will buy you a bit of time, but still, they'll be able to teleport away and start insta-casting the same spell once the cooldown expires. I found a few tactics that helped - scattering my party as much as possible, trying to keep up AOE DOT spells like Firestorm, trying to keep an interrupting spell on cooldown - but a lot of it came down to luck and lots of reloading.

In contrast to my first game, I was marginally better at equipping runes. I never equipped any on my main character or companions' weapons, since I hated the thought of losing them when I upgraded equipment, but I made sure that my companions' armor (and Varric's Bianca) were fully stocked. I slotted in Defense Runes during Act 2, then added Valiance Runes in Act 3. I waited until right before the end before finally adding in the weapon runes and Faria's armor runes; I generally used Devastation on weapons, often paired with Striking, and gave Faria the Primeval Lyrium and Fire runes. I ended Act 3 with over 150 gold (even after buying Ring of the Ferryman), so I dumped a ton into crafting poisons and potions and grenades, but ended up using basically none of them. 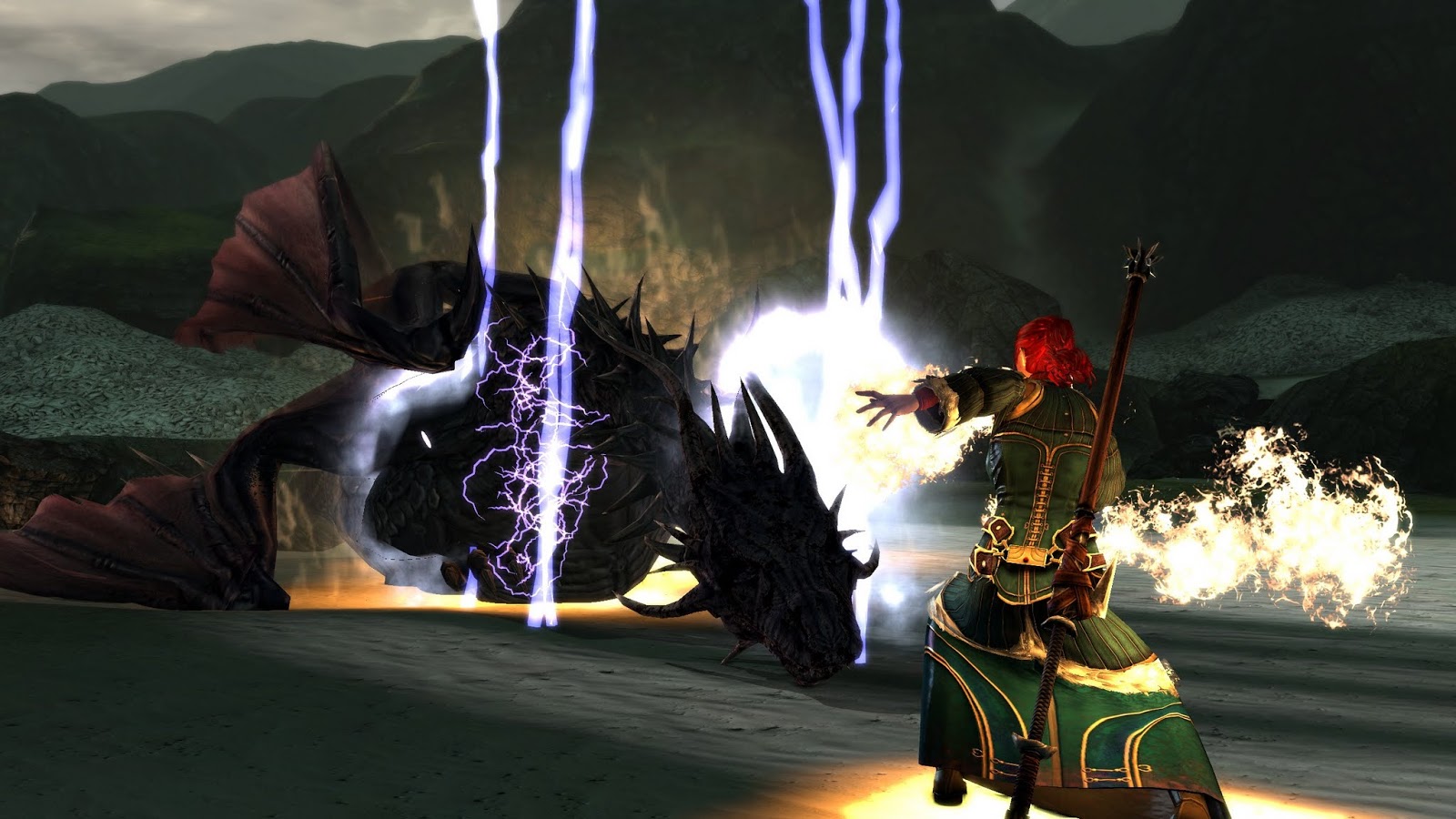 Faria ended up being quite a bit of a pyromancer, with lots of passive abilities and item upgrades that multiplied her already-strong fire-damage spells. After maxing out the Elemental and (most of the) Force Mage trees, she took the Spirit Healer specialization and picked up some very useful spells: not just Revival and Group Heal, but also two terrific passives, one of which kept any party member from ever getting Injured, and the other which gave her a massive +10 CON and +10 health regen.

Every fight went down a bit differently, but in general, this was Faria's approach:
So, yeah. Like I said in my previous post, I can utterly dominate in AOE fights against scores of weak enemies, particularly since I almost always run with Merrill. Fights against bosses would be tougher, but Gravitic Ring is a kind of ridiculously effective spell that effectively removes an enemy from a good portion of the fight. Isabela helps a lot with doing single-target damage, so I would generally end up okay.

Equipping for the endgame turned out to be slightly problematic. I dearly loved the Champion armor, which, in addition to having terrific stats, also had enough mana boosts that I never, ever, ever had to worry about running out of mana, even during the longest boss fights. The Regalia of Weisshaupt had a higher armor rating and a bunch of new bonuses, including a delicious boost to Fire damage and various defensive boosts; but it only had half as many rune slots and didn't have the ridiculous Mana pool boost. I hemmed and hawed, and eventually decided to take it, mostly for variety's sake and partly because I was stacking as much fire damage as possible. It ended up working fine; I had to chug an occasional mana potion late in boss fights, but I had more than enough of those to go around.

I switched up my companions for Legacy this time around for story purposes, and I'm glad I did. With Selene Hawke, I took Varric, Aveline and Merrill; this time around I took Isabela, Carver, and Aveline. I was delighted to hear still more new Aveline/Isabela banter, which is always my favorite in the game. Carver also had some really great content: if he's along, then he's almost as important as you, since he also has Hawke's blood, and there's some very touching reminiscing about your father. By this point in the game, I had eased up on the full-on rivalry with Carver, and we had a couple of nice sibling rapprochement scenes. (There's also some adorable dialogue where he attempts to flirt with Merrill and it goes way over her head. Aveline: "I've been there.")

For the actual endgame, I sided with the Mages again, of course; short of a desire for a completionist playthrough, I can't imagine ever siding with the Templars, and thanks to the Keep I won't need to actually do that if I want to experience what that world would be like. Knowing what was coming, I executed Anders with extreme prejudice. This time around I didn't even start his Act 3 quest "Justice" which requires you to collect various items for his "potion". Unsurprisingly, that does not change the result of his actions, but at least I could claim some psychic distance between myself and his actions. (I do think it's interesting how we as RPG players have such a Pavlovian response to automatically completing any quest that's offered to us; I think there's some potential there for a game-maker to do something interesting that rewards you for being more thoughtful about what quests you accept and not carrying out every option you are offered.)

This time around, I had fully rivaled Fenris, and so he stood by my side even after siding with the mages. That made me happy. While I disagree with Fenris's attitude towards mages, and loathe the horrible way he treats Merrill, I feel profoundly sympathetic for the abuses he has endured, so it felt good to have him on my side this time around. And, it's also just nice to have another friendly NPC body on the battlefield.

Speaking of which, I might not have caught this last time, but it was really fun to see everyone pitching in during the final battle. Not just your non-controlled party NPCs, but Cullen fights by your side from early on, and I was really happy to see Guardsman Donnic and his sideburns jump in near the end. It reminded me of the similar we're-all-in-this-together atmosphere during the fight against the archdemon at the end of Origins, where Arl Eamon, Enchanter Irving, Swiftrunner and Kardol stand by you during that epic battle.

I was struck yet again by how thoroughly melancholy the ending is. Particularly after siding with the mages: you have "won" the game and beat the villain; but Meredith was a complex and often likeable figure, not the unbridled evil of the archdemon from the first game; as your reward, you are ostracized from the city and leave to go on the run, abandoned by nearly all of your companions. I don't think that this is a bad thing, and there are lots of examples of trilogies where the middle entry ends on a similarly dark note (The Empire Strikes Back, The Two Towers [the novel]). It does make me even more curious about what The Exalted March would have been: another self-contained DLC like Legacy and Mark of the Assassin, or an extension from the end of the game (similar to Awakening) that would have given a more definitive (and uplifting?) end to Hawke's tale? 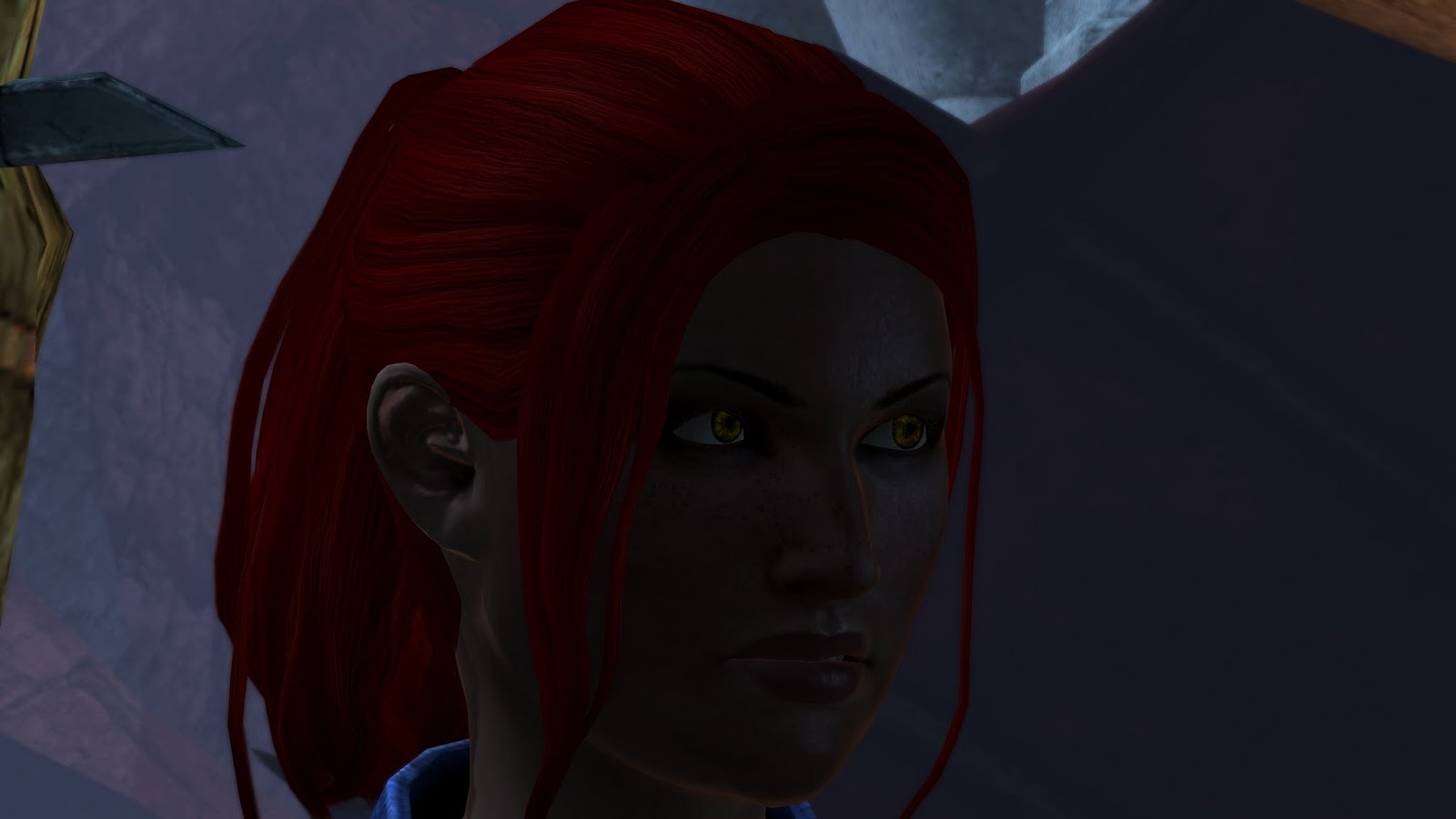 In any case, I'm looking forward to Inquisition. It sounds like it will incorporate much of the plot that was originally planned for The Exalted March, as well as wrap up some of the bigger plot threads that have been around since Origin and tell its own cool new story.

So, yeah! I've finished my Dragon Age 2 re-play-through with a good two-and-a-half months to go until Inquisition drops. I initially started this playthrough just to experience some different sides of my companions but ended up enjoying it in its own right, to the point where I started to wonder whether Faria's story would supplant Selene's as my "canon" playthrough. I ultimately decided against it; armed with foreknowledge of game mechanics and plot twists, Faria's was a "better" game that hewed more closely to my optimal outcomes; but fundamentally, Hawke's story is a tragic one, and Selene's well-intentioned disastrous fumbling resonates with me more strongly than Faria's detached, cynical triumphs.

Still, who knows... given what we know of how the Keep and Inquisition will work, if I end up playing Inquisition multiple times (and that does seem rather likely given my track record with BioWare games), I might find a place in the future for Seberin and Faria's stories to be continued. Once again, I love the sheer breadth of options available to you in these games: there isn't just a "good" and an "evil" option, but multiple levels of nuance, so even though I played through the game twice with two "good" characters, the games ended up feeling quite different. Based on what I've seen so far of Inquisition, it looks like that excellent trend will continue in the future.
Posted by Christopher Charles Horatio Xavier King III, Esq. at 8:01 PM