Once again, I had the pleasure of meeting one of my literary icons in the flesh. The latest name to strike off my steadily dwindling list of “awesome authors I would like to meet one day” was William Gibson, who came to San Francisco to promote his brand-new book, The Peripheral. 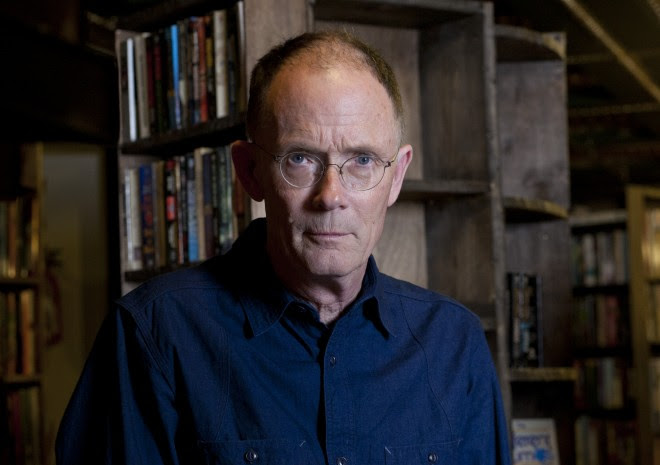 I’ve had a weirdly mediated relationship with Gibson. He is often credited with inventing cyberpunk, and he was a direct influence on some of my most formative creative forces, including Neal Stephenson’s “Snow Crash” and the Shadowrun mythos. I’ve been aware of him for a long time, but it was really only within the last decade that I began reading him directly. I was pleased to see that it still holds up: while reading Neuromancer today seems less like a prophetic glimpse of the future than it did in the 1980s, it’s still a darn fine read, and prone to causing whiplash when you start to realize all the seemingly ordinary things it described that simply did not exist at the time it was written.

His more recent books have drifted closer to our present time, and perhaps a direct result he has gained more acclaim from both the mainstream press and literary critics. The Peripheral seems like a return to form, with him uniting his recent style with his older fascination with the future.

This event was held at The Booksmith, the same independent bookshop that hosted the wonderful David Mitchell last month. Unlike that previous event, which was held in a movie theater, this was in The Booksmith’s own cozy bookstore. I’d been lucky enough to catch an early notice of his appearance, and so had managed to snag a coveted reserved seat by pre-ordering the book. This proved to be even more helpful than I had hoped, as business obligations forced me to race north from Santa Clara in order to arrive at the reading in time, and without the reservation I would have been stuck standing very far back indeed.

Gibson opened with a few brief remarks, then jumped into a reading. He had noticed that this book was “unusually vulnerable to spoilers,” to the extent that he’s been reluctant to retweet positive reviews because of how much they give away. So, he restricted himself to the start of the book, only reading chapters two and four (roughly five pages combined). It’s always really engaging to hear an author read their own words; Gibson doesn’t have a radio voice, but he’s able to place the beats and the intonations so subtly and effectively that they strongly elevate the text. I found myself re-reading these chapters soon after, and got more out of them the second time around.

He also accepted quite a few questions, and his interesting answers are the main reason why I’m writing this up now. In no particular order:

Any time an author (or, I suppose, another creative type) takes audience questions, it’s inevitable that they end up fielding multiple variations on the query “Where do you get your ideas from?” (fortunately at least phrased differently). Gibson is pretty intentionally non-self-reflective about “his process”, and leaves thematic analyses of his works to the critics. He did say, though, that he often feels like, as he goes through life, he accumulates various stray thoughts in the “hopper” of his mind. They stay in there, decomposing over the years, until he’s ready to take them out and try to use them in a novel. By this point, they’ve often changed enough that they may bear little resemblance to what he originally encountered.

Back when he first started writing, he wanted to get a stream of new, strange ideas, and so he would spend hundreds of dollars on magazines. In those pre-Internet days, that was the best way: magazines were (and are) aggregators of different, random thoughts. He’d just absorb them all: gothic Lolita, tons of magazines from Japan, whatever he could get his hands on. Now, of course, rather than spending hundreds of dollars to get a certain amount of strangeness, everyone can get an unlimited amount of strangeness through their web browser. It’s gone from him trying to open a faucet to him having a fire hose.

One person noted the different time spans of his books (Neuromancer set in the future but really about the 1980s, Pattern Recognition and friends are of and about the 2000s, etc.) and inquired about the significance. Gibson mentioned that, while he was very careful to never put information about the year in the book, in his own mind he had thought that Neuromancer took place around the year 2035. But, he said, all science fiction and speculative fiction books are really about the time in which they were written. When you read 19th-century science fiction today, you aren’t learning anything about any sort of possible future: you’re learning about the 19th century. This process happens to all books, including his own.

As for the reason for shifting time periods, he’d felt like his “yardstick of contemporary weirdness” had grown limited. Back when he was first starting to write, he had a strong sense of the strange things happening in society, and could use that to drive his novels. In later years, he felt like he was losing that sense. In some ways, his more recent present-day novels were a chance for him to re-calibrate that sense of contemporary weirdness; and now, armed with a fresh sense of the odd things at the fringes of culture, he’s more confident in writing about the future again.

One person mentioned that he had always thought that Gibson was cautiously optimistic about technology, and asked what he thought about other writers, like Dave Eggers, who seem more deeply pessimistic. Gibson demurred, and clarified that he has always been agnostic about technology. He believes that technology is amoral when it is created; it is only when human beings get their hands on it that it becomes good or evil. I thought that was interesting; it put me in mind of Kurt Vonnegut’s famous commencement speech, in which he implored budding engineers to only pursue positive and not wicked technology.

Another person asked whether Vancouver has had an impact on Gibson’s writing. It hasn’t too directly, only appearing twice across his entire career, once in a short story and again in the climax of Spook Country. He did share a fun anecdote about how, when he was writing the Vancouver scenes, he would clearly visualize visual aspects of Vancouver, then drive out to double-check them, and would flabbergasted at just how severely wrong his ideas had been.

After finishing his questions, he started signing. I appear to have some kind of superpower to always end up near the very tail end of any signing line; fortunately, I always have a brand new book in my arm, so it’s always a pleasant wait. Several other people had brought along some beloved older books for him to sign, but of course I was too dense to bring any of mine. I was really impressed by his stamina: even after signing books for nearly an hour, he was still engaged and pleasant with each person coming through the line, thus reinforcing yet again my belief that authors are some of the nicest people on the planet.

I’m still not much further than chapter four in the book, and honestly I’m backed up enough with other stuff that it will probably be a while before I can focus on it. Still, it’s wonderful to have another great tale to look forward to, and having a brief moment of contact with the man himself makes me all the more excited to dig into it.
Posted by Christopher Charles Horatio Xavier King III, Esq. at 6:29 PM