Huzzah! I’ve finished off a delightful romp through The Last Court. It was exactly what I was hoping for: an entertaining diversion that helped whet my appetite for Inquisition, which also shed light on some new aspects of Thedas and let me enjoy roleplaying as a different kind of character: a ruler rather than a killer. From what I can tell, that should actually lead nicely into the more expansive type of gameplay you will take on as the Inquisitor in the upcoming game, which makes me all the more eager to try it out. 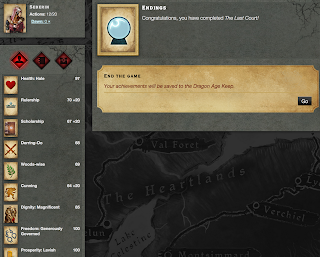 No major updates to my previous post about the mechanics of The Last Court. I will note that the Trophies, Viands, and Secrets will be needed in groups of 3, so if you’re negotiating with the Muttering Banker and trying to allocate your Bags of Royals, it’s good to focus on “topping off” to the nearest multiple of 3.

In terms of getting the best outcome, your specific allocation of resources doesn’t really matter. You can get the best ending with, say, 50 Secrets or 50 Trophies. But, you’ll get some more lore and flavor by having a wider variety of resources. All things being equal, it will probably be the most fun if you try getting a mix of things, but don’t sweat it if you seem to be particularly Trophy-heavy or whatever.

Speaking of which: in terms of strategy, hunting is BY FAR the most efficient way to gather resources. Doing court stuff in the Chateau is a lot more fun, but it's an extremely slow and expensive way to acquire end-game resources. Once your stats get to a certain level, though, you can complete a hunt in just 4-5 actions with no penalties, so that’s a much quicker way to get the resources you need to win the game. If and when I play this again with a new character, I will probably do “court stuff” for the first few days until I get enough favors for the set of advisors I want, and then mostly focus on hunting, just returning to court for Market Day and to break up any monotony.

The Last Court is much more about atmosphere than plot, but there’s still some good story in there. Let’s delve into some:

Some details about my game: I resisted the temptation to break into the Chantry. I love that the choice was there, but the whole Mr. Eaten experience has taught me to be extremely cautious when the game warns me not to do something. I didn’t seem to get any particular reward from refraining, but I’m pretty sure that, if I had broken in, it would have complicated the Divine’s plans to re-consecrate it.

I thought that the Horned Lord stuff was done extremely well. I was similarly cautious about all of my dealings with him: I avoided antagonizing him, but also took care to not become indebted to him. This led to some tense situations, most notably the Bard’s rescue. I paid tribute to the Lord, but once it became clear that he would also demand a favor, I decided to rescue him myself. I debated whether to attend the Feast or not, and eventually came to the conclusion that it would be more insulting to snub him. I was cautious during the Feast, and at the end, decided to return the favor… then groaned in happy frustration when I realized how he had tricked me. Well played. It led to a tense moment during the Divine’s visit, but I was able to fob him off and everything ended well.

In terms of my personal relations: there are a lot more Counsellors than other types of advisors, so the choices there were a bit harder to navigate. I ended up deciding to go with the Smiling Guildmistress as counsellor. The Dashing Outlaw is an intriguing figure, because she’s one of the few advisors who can fill multiple slots, either Accomplice or Bodyguard. I decided to take her on as my Bodyguard; in retrospect, though, I think she’s more expensive than most other choices (which does fit the flavor and her flexibility nicely), so I might not do that in future play-throughs. Finally, I was fascinated by the Well-read Pig Farmer, and took her on as my secret Accomplice. I've been curious about Tevinter ever since Origins, and while we don’t learn a ton from her, she was a great, stereotype-busting person to interact with.

This wouldn’t be a BioWare game if we couldn’t complain about romances, so I’ll add a quick note here. I was a bit bummed that there are only two options, the Bard and the Abbess, neither of whom were super-interesting to me. What’s more annoying, as far as I can tell, you can only take the Abbess as your lover after she becomes your Counsellor. Since I didn’t realize that until after I had recruited the Guildmistress to that slot, I would need to have gotten rid of the Guildmistress, then recruit the Abbess to Counsellor, then presumably get more Favors and take her as Lover, and THEN RE-RECRUITED the Guildmistress. I guess I’ll keep that in mind in case I play again, but it felt a bit frustrating mechanically. I was also disappointed that you can’t romance the Smiling Guildmistress or the Well-read Pig Farmer, both of whom appeared to be both intriguing and available.

The most fun parts of the game were ongoing stories related to Market Day. There tended to be some really good choices and roleplaying opportunities in here, like deciding how to deal with the Elusive Iconoclast; as a fairly egalitarian-minded ruler, I used a soft touch and put her into a peaceful retreat. My favorite of these plots was probably the bit with His Dour Lordship, mostly because it spins up multiple sub-plots which aren’t immediately obviously connected with the main one. I’d acquired several Favors from him, but never really trusted him and so never made him my Counsellor; after determining that he was the spider at the center of the web, I gladly broke protocol and imprisoned him in my dungeon. Hey, what’s the point in having a dungeon if you can’t use it?

The actual Feast of the Divine is the obvious climax of the game, and I found it very satisfying. There are a couple of complications to manage, but for the most part you’re reaping the benefits of all your hard work over the previous seven days. She’s a cool character; I love the brief glimpses we’ve gotten of her in Leliana’s Song and The Masked Empire, and Chris did a great job at capturing her voice during her dialogue here. I actually debated for quite a while whether or not to blackmail her; I had plenty of Secrets, but it felt like a very aggressive thing to do. I ultimately went ahead with it, and the resulting exposition was well worth it.

I won, of course: redeemed the Shame, got back my sweet glass antler mask, and am left happily ruling over a wealthy, proud, and independent land. All hail Serault! All hail the Huntress!

So, yeah... obviously, I enjoyed The Last Court a lot! It looks like the fanbase has gotten into it, too. There's even some fan art starting to spring up!

According to the end of the game, the results have been recorded in the Keep. That’s pretty cool! There’s no UI for it yet, but I imagine it’s coming. It’s exciting for multiple reasons, one major one being that I think this is the first time that the Keep will be recording “live” outcomes as we play them, rather than allowing us to manually specify outcomes on our own.

Based on what I’ve read on the forums, it sounds like the ending of The Last Court won’t have any impact on Inquisition. Still, it’s a fun game in its own right, and I wouldn’t be shocked if it comes into play at some point in the future. One of the great things about the Keep is that it can become a sort of clearinghouse for all Dragon Age-related activities: not just the main games, but little standalone things as well, such as bits of interactive fiction, or even offline things like the pen-and-paper roleplaying game.

It will become increasingly challenging for the Dragon Age team to keep world states coherent as more and more variables come into play; but, as the Keep team has made clear, the goal is not just to support the traditional branching-plot purpose, but also to sort of serve as a place of record. The Keep is a sort of living history: a statement of what we have accomplished, of what has happened, and what COULD have happened. In that sense, it’s very much in keeping with the delightfully ambiguous sense of history that was showcased in The World of Thedas, which in turn is much like our own world’s treatment of history: often disputed, often challenged, often unknown, the more so the further back one goes. The tale of Serault feels very important at the moment. Before long, it will become another tile on the grand mosaic that depicts my own personal conception of Thedas.
Posted by Christopher Charles Horatio Xavier King III, Esq. at 7:35 AM