Here’s something that’s, uh, a little different from my last writeup: Wittgenstein’s Mistress, a fascinating novel by David Markson. Rahul recommended this to me ages ago; as with most recommendations, even if something grabs my interest it takes a long time to make its way through my to-read queue, and by the time I start reading it I’ve forgotten what about it piqued my curiosity. 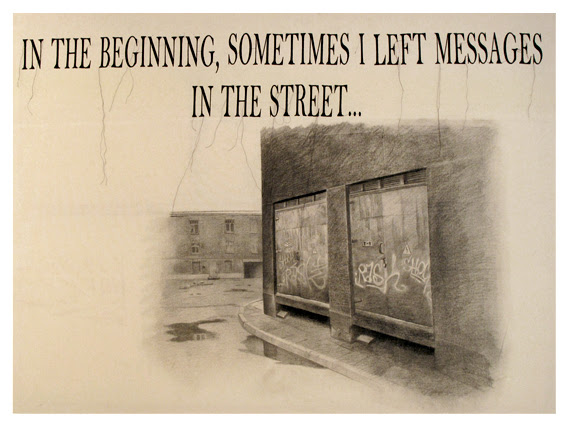 I’m really fascinated by voice in novels, and WM has one that’s utterly unique to my experience. The novel contains no chapter or section breaks, just an endless series of paragraphs, each only one or two sentences long. It’s told in the first person, and you gradually come to realize that it’s being written on a typewriter by a single woman, possibly in her fifties. She didn’t set out to write her memoirs or unburden her psyche: she appears to be somewhat bored and somewhat antsy, and is using this project as a sort of journal, capturing her flitting thoughts in real-time over minutes, days, weeks.

There’s a lot that I love about this book, but the single best part may be the way the narrator is constantly editing herself, correcting earlier statements that she worries may have given the wrong impression. Many, many, many paragraphs start with “Actually,” “Well,” “Then again”, or other qualifiers. She’ll often recall an event from her past, then several pages later realize that she got some detail wrong, then speculate that she might be conflating two separate events, and eventually call into doubt whether any of it matters anyways. But, again, it isn’t as if she’s desperate to correct the record or anything. Rather, the book is perfectly capturing the sort of inner monologue that we (or, at least, I) have in our heads when we’re idling, letting our minds wander and chew on themselves as we reflect on the past, a kind of mental chattering that keeps us busy without actually doing much but evoke a sense of nostalgia.

Here's a fairly representative passage from the novel:
As it is also a fact that in the painting by Rogier van der Weyden they are taking Jesus down from the cross at Calvary, but they are also taking him down on the top floor of the Prado, in Madrid.
Right next to the windows I washed.
I see no way of refuting either of those statements. Even if, as I indicated, there appeared to be something wrong with the first of them when I typed it before.
This is not something I intend to worry about, although I can fully understand how one might worry.
Well, perhaps I have already said that I actually do worry.
Although I have just now eaten a salad.
While I was eating the salad I thought about Van Gogh being mad again.
Lord above.
Van Gogh was not mad for a second time. It was I who was thinking about him once more.
And in any case it was Van Gogh trying to eat his pigments that I was more exactly once more thinking about.

There really isn’t much of a filter on Kate’s thoughts, and she treats every subject with equal importance, whether it’s the unusual sight of a driverless car rolling past her, or a recurring memory dropping hundreds of tennis balls down the Spanish Steps, or her dead son, or mowing the lawn. In fact, she’ll often seem to dwell on the more trivial things, endlessly refining her statements on which composers’ biographies she may or may not have read, while only obliquely referring to what seem to be far more interesting questions.

The biggest of these is what, exactly, is going on with Planet Earth. Among the cacophony of apparent red herrings Kate drops a bombshell: she is the last human being left on Earth. And, that’s all we know. This information arrives early, and I spent the rest of the book expecting her to return to this subject, but we never really get any more details: whether there was a war, or a plague, or the Rapture, or a mass colonization. The physical infrastructure of the world seems to be intact, since Kate has spent years traveling between and living in the world’s greatest cities. And other organic life seems to still be around, as Kate reports seeing a cat. What should be the central idea of the story becomes a discarded thought, neglected on the vine.

Of course, there are other possibilities. Kate is very straightforward about the fact that she’s crazy, which has the potential for explaining some things while opening up many more questions. The timing and nature of her madness are never explained, so multiple scenarios are equally plausible. She could just be making this whole thing up, rambling to herself from an isolated home, projecting her alienation after her sons’ death onto the whole world. Or maybe she really has been all alone on Earth for years, in which case we would absolutely expect her mental health to suffer.  Which is cause, and which is effect: the madness or the isolation?

Since the sanity question is raised so early, it’s natural to read the book with extreme skepticism. Different people will probably raise their eyebrows at different points; personally, I was most put off by the tales of Kate’s travels. In a world with no other people, how could one middle-aged woman possibly have circumnavigated the planet? She describes driving through Siberia, failing to see Moscow, living in Rome and London, finding a boat that she sailed across the Atlantic, and so on. Not that any of this is impossible, of course, but it certainly strains credulity. And it isn’t necessarily an all-or-nothing proposition, either. Maybe she really is the last woman on Earth, and has gone crazy as a result, and because of this her memories have become jumbled, conflating trips she took at an earlier time with her recent haunting experiences.

Wittgenstein's Mistress feels experimental and unique - my copy included an afterword written by David Foster Wallace, which should tell you a lot about the intellectual company it keeps - but it seems very approachable. I've hesitated using the term "stream of consciousness" in describing the book: even though that's probably the most accurate description of the style, it doesn't match the knottiness that most people associate with that phrase. Honestly, the voice I hear in "Wittgenstein's Mistress" sounds a lot like my own voice when I'm writing a blog post: lots of random thoughts occurring to me, I write them down, following up on promising ones, amending ones that seem incorrect or incomplete. If I faithfully typed every thought as it occurred to me, and never deleted any of them, it would come out a lot like the text in this book. That's pretty interesting!
Posted by Christopher Charles Horatio Xavier King III, Esq. at 9:13 PM