There's a particular type of weird feeling that I think most of us have experienced at least once. Imagine you're going out to lunch with an old pal from school. A friend from work comes into the restaurant and heads towards you. You're about to introduce the two of them, but they greet one another and act like old friends. A little part of your brain explodes: "How do you two know each other?! You belong in separate universes!" It's a disorienting feeling, but also a really pleasant one, to realize that awesome folks know each other and do stuff together.

That was pretty much exactly the feeling I had upon hearing the announcement about The Last Court, the heretofore-secretive collaboration between BioWare and Failbetter Games. I've loved BioWare's games since the original Baldur's Gate, have thoroughly immersed myself in the world of Fallen London, and more recently been actively helping to beta-test Below, Chris Gardiner's story-rich roguelike StoryNexus game. When I heard the details of the project - it's a StoryNexus-based game written by Chris Gardiner set in Orlais during the time leading up to the start of Inquisition - I instantly started salivating. The fact it's integrated with the Keep makes it all the better. 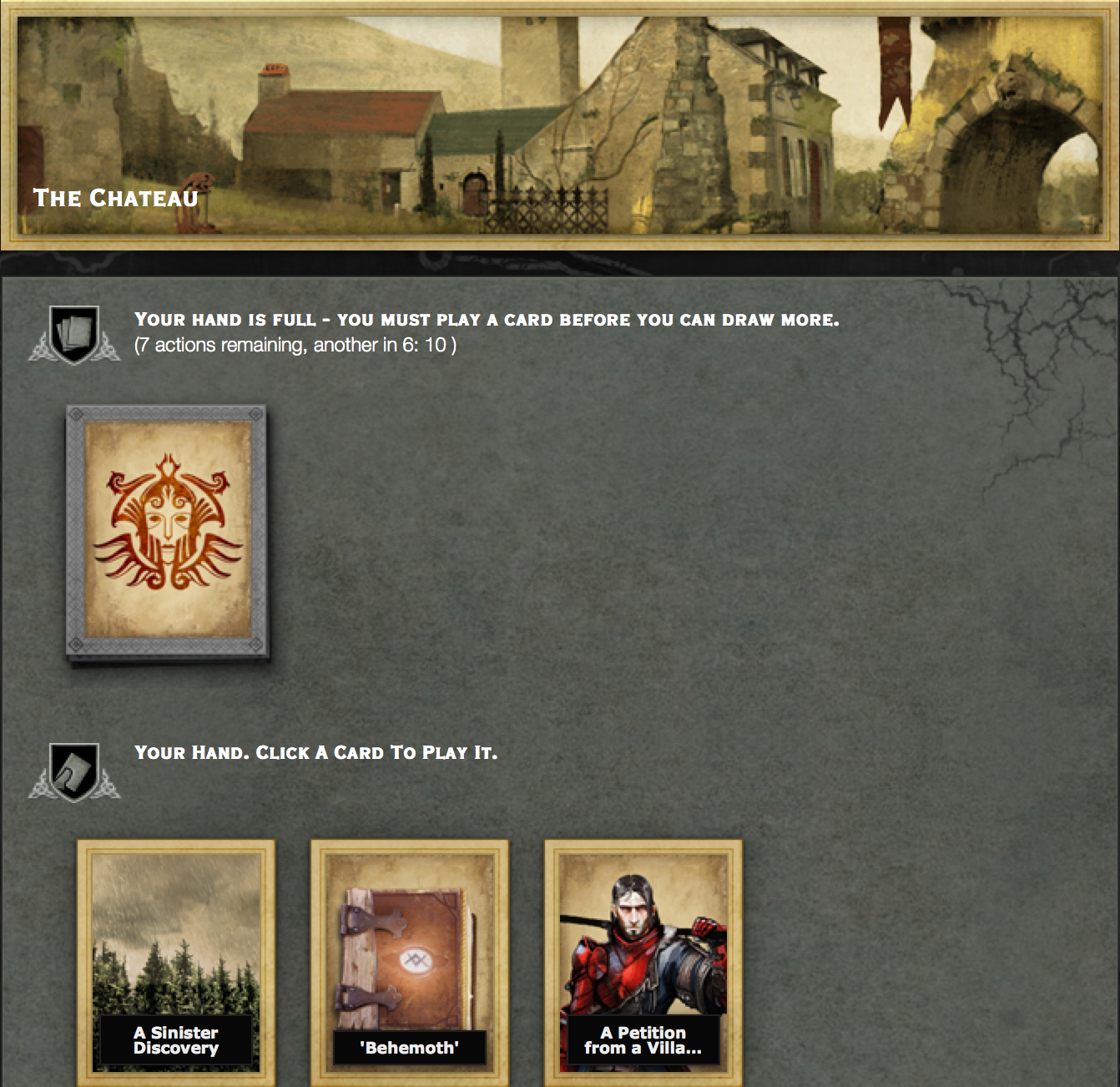 Based on the chatter I've seen in online forums, it looks like there's a very respectable crossover of fanbases between BioWare and Failbetter. That shouldn't be surprising. I'm pretty sure that BioWare is the most narrative-driven AAA game developer, and Failbetter has a similarly intense focus on narrative from an indie background (albeit focused on slightly different genres). The early reaction seems to be very positive. Frankly, we're all starving for some Dragon Age, and The Last Court is doing a fantastic job of providing a peek into another part of Thedas, some tantalizing lore about old and new characters, and also giving us a chance to play as a different type of character, actually making political decisions that shape the nature of your realm (something that previously was only briefly touched upon in Dragon Age: Awakening).

For those of you who haven't played StoryNexus games before, you're in for a treat! They're vaguely reminiscent of a Choose-Your-Own-Adventure story, but much more game-like. You have various stats and items, and can often choose which of several storylines to pursue at any given time. Each "storylet" is a bite-sized standalone narrative chunk that lets you make a decision and experience the results, which might also tie into a larger overarching plot. So, it's the sort of thing that's perfectly flexible based on your available playtime: you can squeeze in a couple of storylets while standing in line at the grocery, or sit down at your computer at the end of the day and play for a longer stretch. The mechanics of the game bear some similarities to free-to-play games... wait, come back! There are microtransactions in here, but they're absolutely not necessary to play or enjoy; no content is gated behind a paywall, and paying is just for the impatient. The Last Court uses a virtual currency called "Dawn" (unlike the "Nex" in other StoryNexus games) which you can use to play more frequently; I haven't bought any (sorry, guys!) and am pretty sure that I won't. But, again, I don't need to - I'm enjoying the savoring of this game, so I wouldn't want to rush through it anyways.

One aspect that's very different about TLC compared to other Failbetter games is the addition of a real-life time factor. Every 24 hours, another "Market Day" occurs, which spins up another aspect of the story and provides in-game rewards. There's a limit, though: you only have seven Market Days to prepare for a major event that ends the game. This means that I can't pursue my standard strategy of solely focusing on grinding up stats in the early phase of a game to overcome the challenges later on: sure, you can improve stats, but you can't just do that, you also need to start work sooner rather than later on accomplishing your goals. I appreciate that, and I also appreciate how it puts a de-facto time limit on this game. Free-to-play games often get the bad rap that they never end and only exist to string you along on a treadmill. There's no treadmill here, just a path, and once you reach the end of that path your journey is over.

I still haven't beaten it yet, but I think I've gotten a pretty good handle on the mechanics. Here's what I've gleaned so far, a mixture of observation, second-hand reports, and deductions. I'll try and update this post as I get further along. No plot spoilers here.

Have fun! I'll probably make another post about the plot after I've finished the game and can speak to the story. I will say that so far I'm having a blast. This is a true peanut-butter-in-my-chocolate situation, and I'm loving the offspring of these two wonderful developers.
Posted by Christopher Charles Horatio Xavier King III, Esq. at 7:39 PM