Just a brief note on my continuing adventures in Dragon Age:

As promised/threatened, I've immediately leaped back in to Dragon Age. This time I'm playing as a male Qunari mage named Visaas Adaar. I have three objectives for this character:
So far, progress is slow but steady on all fronts. I've reached the early/mid game inflection point, where things really open up and the plot kicks into gear. It's been easier to plan my route through the game, thanks to my very recent experience with Aztar and giving myself permission to glance at a few online notes, most particularly around seeing where early Inquisition agents can be found. Unlike my first game, where I jumped around a variety of locations before reaching this point, here I've almost exclusively been operating in the Hinterlands, with some pretty good results. 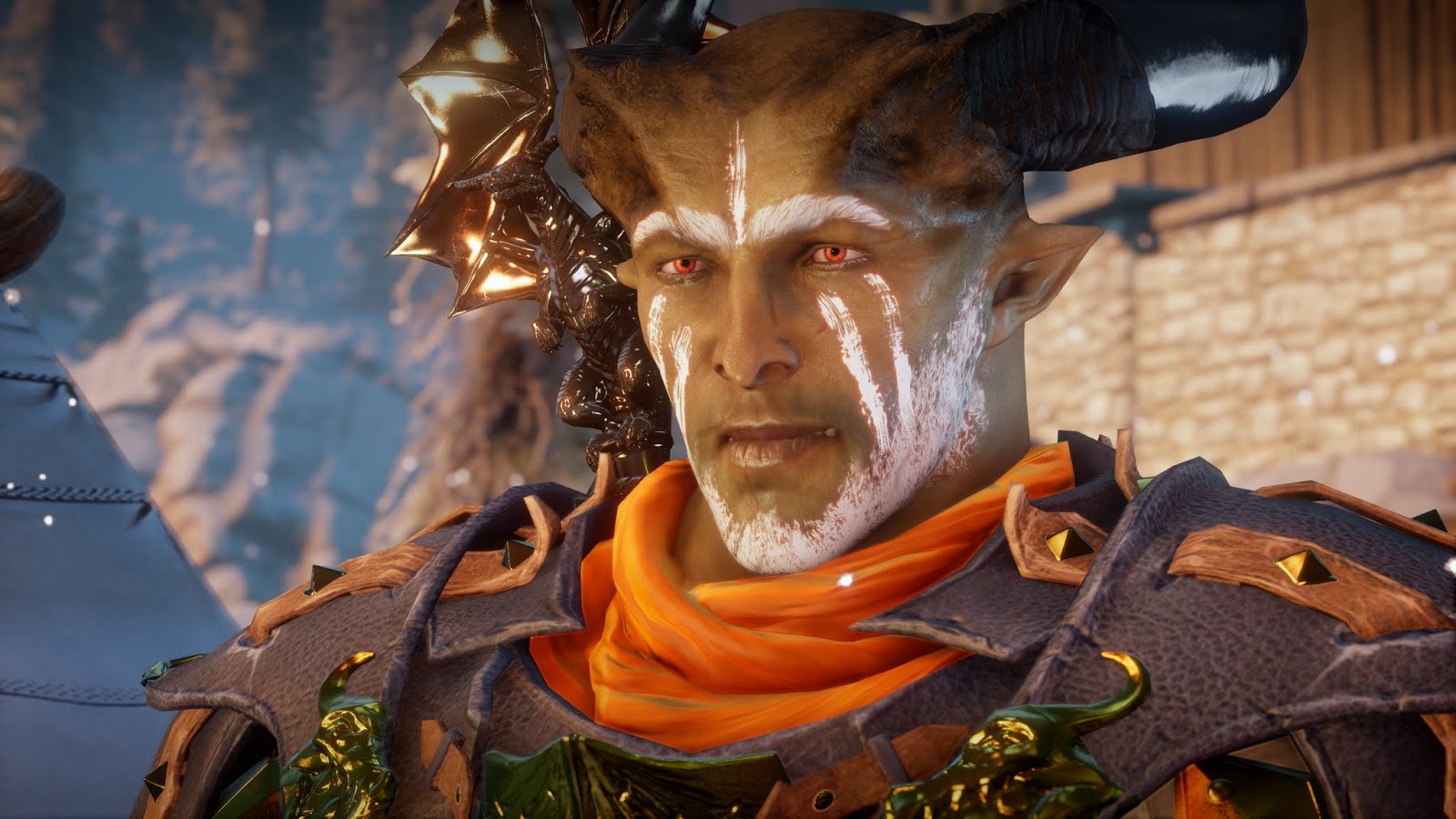 Playing on Nightmare is definitely more challenging, but honestly not as tricky as I'd feared. I do need to pay close attention to party composition: if I expect any fights at all, I always bring along one good tank and two barrier mages (including my PC); with Aztar, I only worried about combat loadout for main-mission sequences and tough quest bosses. For popup fights, I just make sure that I keep my barrier up as much as possible, but otherwise can let the AI play itself most of the time.

For tougher fights, I occasionally need to pause; I rarely switch over to other characters, but will check and make sure Visaas is taking down enemies in the proper order (mages, then archers, then assassins, then grunts, and finally tanks). So far I haven't done much with potions; in a couple of pinches, regeneration potions helped me pull through. Likewise, I haven't used focus abilities yet, but I expect to make use of them during boss fights.

I'm kind of wrestling with a bigger strategic question: I don't think I'll have the patience to make this a 100% completionist game, so I'm trying to figure out if it will make more sense for me to follow the general approach to my Aztar game, where I do most of the optional side-quests to try and get slightly over-leveled for story missions; or if I try to take most of the plot stuff near the minimum level, when enemies will also be weaker. The thing which is slightly pulling me towards the latter approach is recognizing just how generous the game is with supply crates during those story missions: you tend to get a good supply throughout, with a guaranteed crate before the final boss fight. Coupling this with focus abilities and (hopefully) some jars of bees, I'm hoping I can complete a critical-path pass through the game successfully even on Nightmare, and possibly in less time than my Normal-difficulty Aztar game. 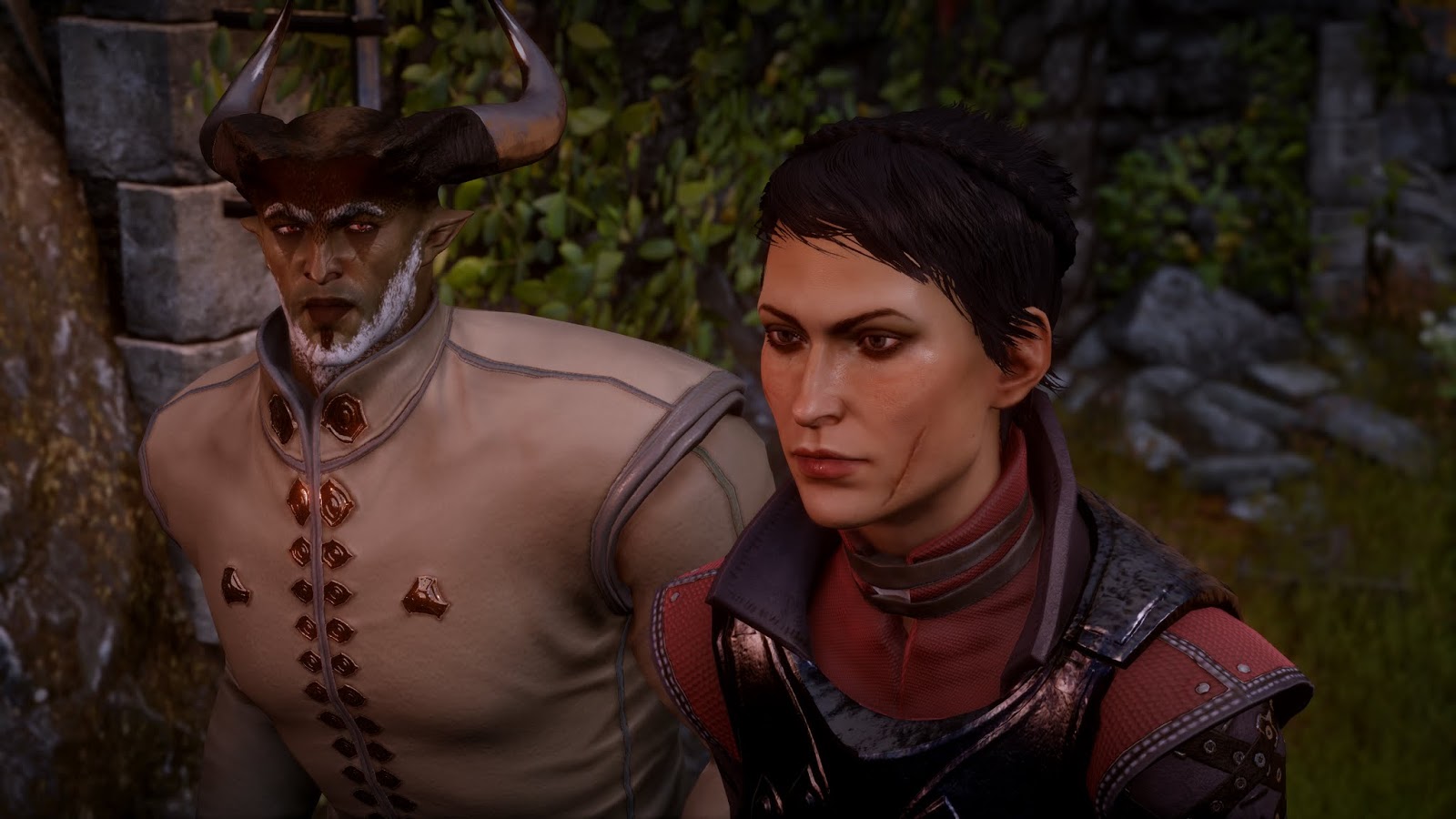 Visaas is a mage. I dislike the starting spells you get; Chain Lightning is OK, except that it hits multiple targets, so it can draw more aggro on you than you expect, particularly before your tank has their taunt abilities and you get an aggro reduction passive. Flashfire just seems bad: it costs a ton of mana, doesn't do much damage, affects a single enemy, and a lot of enemies seem to be resistant to its panic effect. Which reminds me, I need to respec out of it now that I can. Anyways, I've been mostly focusing on the Spirit tree, which is redundant with how I build Solas, but that redundancy is good; Barrier is incredibly effective in the game. I haven't taken a specialization yet; I'm trying to choose between Knight-Enchanter, which I've heard is the most overpowered specialization in the game but seems a bit redundant with my team loadout; or Necromancy, which seems very useful for crowd control and survivability. (I love the Rift Mage specialist as a character, but remain deeply skeptical of the tree's utility.)

So far, my main loadout has been Visaas, Cassandra, Solas, and a rotating lost most commonly occupied by Sera; in this game I've outfitted her as an archer, so in most engagements Cass will try to engage the enemies in a clump while the three others unleash ranged attacks from a safe distance. This way I can prioritize our barriers, either putting them over the three ranged if we're taking any fire and otherwise helping out Cass. I'll shortly be swapping out Cass for Blackwall, since I'm building him as a tank this time and his Champion specialization is better-suited for that role than Cass's Templar role. There's a slight chance that, if I take Knight-Enchanter, I might instead try to keep Blackwall, Cole (specced for daggers) and myself in melee range, with only Solas playing support at a distance. Again, the goal would be to maximize barrier usage.

I haven't developed quite as strong of a concept for Visaas's personality as I did for Aztar's, but he's still pretty fun to play. If I were to sum up his philosophy in a single phrase, it would be "Puny hu-man!" He's vaguely bemused by the big mess that humanity have gotten themselves into, and barely tolerates their requests for assistance in getting out of it. Unlike Aztar, who was a big believer (principally in herself), Visaas has a jovially sneering attitude towards any sort of institution: the Qun, the Chantry, the Templars, the Circles, Orlais, even the Inquisition. And unlike Aztar, he has zero interest in actually replacing or improving upon any of those institutions. His role is to be the kid who sits in the back of class, making smart-aleck comments at the teacher. When he's compelled to help, he'll sigh, complain, and then do the bare minimum required.

He isn't a bad person, really, and doesn't deliberately do anything evil; but he also doesn't feel compelled to go out of his way to fix other peoples' mistakes. His overarching attitude might be something like, "Ugh, fine. If none of you is going to save the world, I suppose it'll have to me. This is the last time I do anything for you jokers, though!" His iconoclasm actually melds pretty well with Sera's opinions, although he doesn't have a well-developed moral lodestar like she does: he's not doing it for the little folks, or to achieve a balance, just because people keep on bothering him to fix it.

I've recruited all the companions and tried to avoid getting locked out of any content, but other than that I'm trying to play things oppositely to my approach in the first game. Most dramatically, I sided with the Templars in this game, and holy cow, it makes a huge difference. I'd kind of expected that it would swap around a few characters and have some new dialogue, but basically go through the same arc. Instead, the lead-up to the attack on Haven plays out incredibly differently: mechanically and lore-wise. There's no confrontation with Alexius, no trip into the future, and not even a good glimpse at what Corypheus is attempting to achieve. Instead, there's an utterly fascinating and freaky trip into your own head as you wrestle with an envy demon for possession of your soul, and a ton of lore around spirits and the play Corypheus is making for control of the red templars. 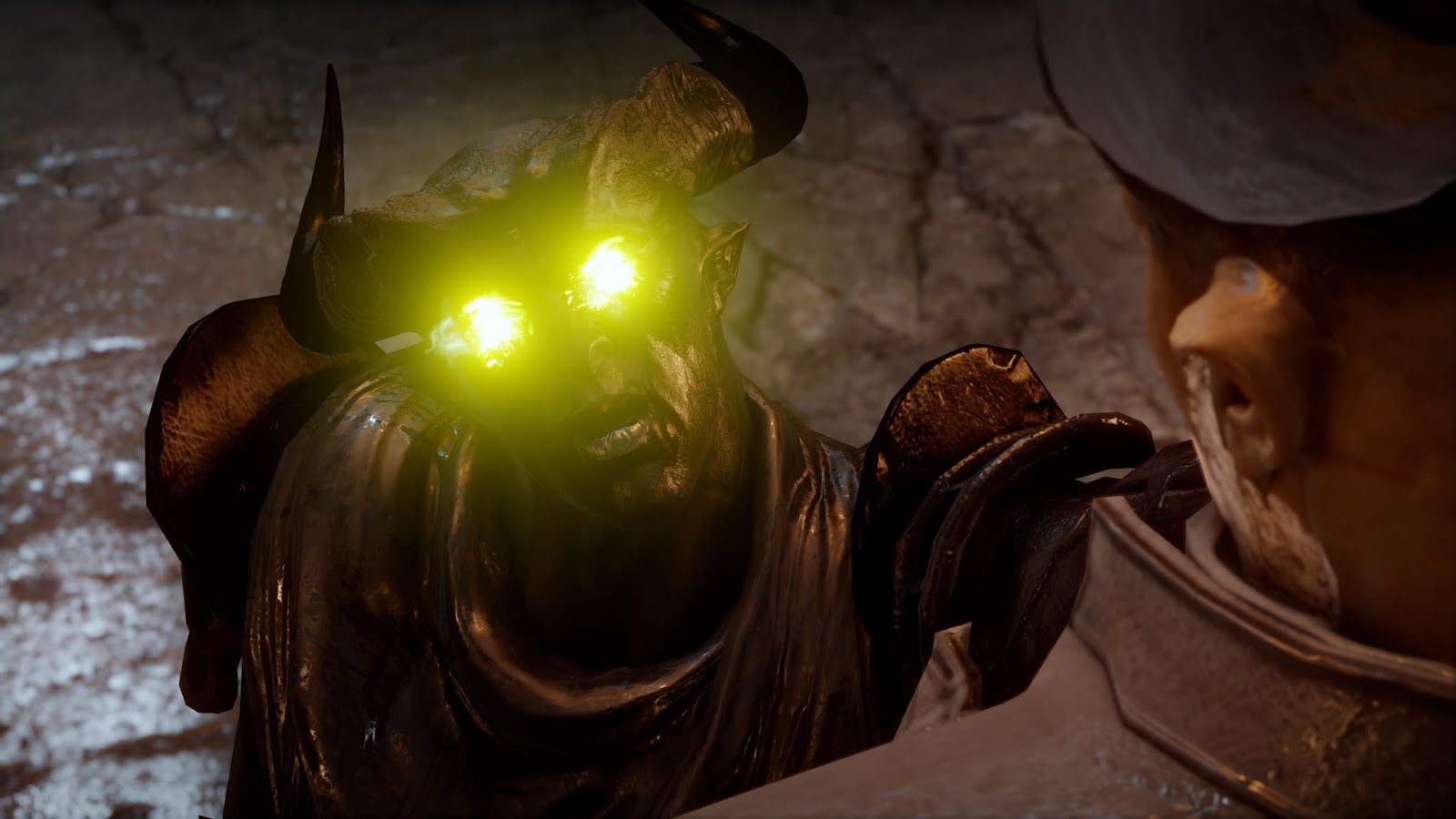 Your attempt is actually successful: you can defeat the leadership of the Red Templars before they have finished converting the Order. You also face a choice similar to that you encounter after rescuing the apostate Mages: you can force the Templars to dissolve and subordinate themselves within the Inquisition, or allow them to remain and rebuild as an independent organization allied with your own. I'm curious to see how this continues to play out through the rest of the game, and in particular if the bands of red templars will be replaced with bands of renegade mages. It's already become clear that Samson is no longer Corypheus's lieutenant: instead Corpheus is served by a female venatori named Calpernia, who I don't remember even encountering during my Aztar game.

Anyways! The game continues to be tons of fun and remains very engaging. I'd been slightly worried that it might feel boring to repeat it so soon after "finishing" it the first time, but that hasn't been the case at all. Between the different world state background, new character, new personality, and different plot choices, the game is playing out significantly differently from before. I'm thoroughly impressed at the breadth of experiences the game enables. After all, even though hard-core fans like myself will revisit this game multiple times, I'm pretty sure that statistically most players will only beat it once, if that. From a purely logical perspective, it would make sense for BioWare to invest as much as possible in making that single play-through as good as possible. I feel very fortunate that they decided to take all the time and effort to create such a rich and varied experience, recognizing that most players would only see a fraction of the content.

Oh! And I'm not screencapping quite as much this time around, but still grabbed, um, over a hundred shots up to this point in the game. So, here's another album! You're welcome!
Posted by Christopher Charles Horatio Xavier King III, Esq. at 2:30 PM