Short write-up of a micro-read: I plowed through the entirety of The Strange Library while stuck on a Caltrain waiting for a crushed car to be cleared from the tracks in Burlingame. To be clear, this wasn't a long wait, and it's far from the only thing I did on the train. What I'm trying to say is that it's a short book. 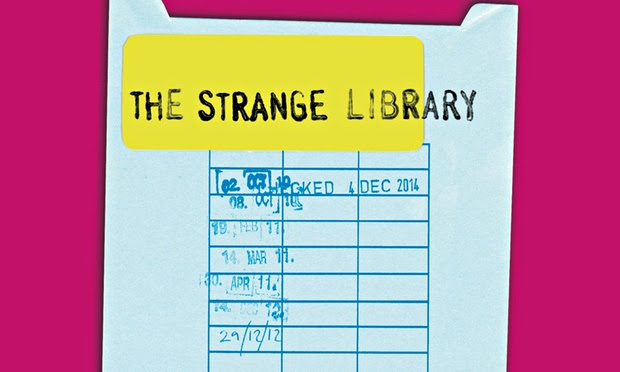 I am a little curious why it was published as a stand-alone story instead of in one of Murakami's periodic (and excellent) short-story collections. It might be as simple as the fact that he's an extremely popular author and people will happily buy anything from him. Being published as a short story (I don't think you can even call it a "novella") does allow more creativity in the book's physical design than we would typically see. Chip Kidd, who has designed the various fantastic covers for Murakami's Knopf books in America, got to stretch himself even more this time, inserting some really striking and evocative imagery that helps guide the tone of the book (and, incidentally, pad out its length).

On the whole, I thought it was a terrific book. Dark! Very dark. I feel like Murakami has done more disturbing stuff before, but a higher proportion of this book occupies that dark space than any novel of his I can think of.

I enjoyed the very Murakami-ish explanation of what's going on with the boy, the girl, and the sheep man. After puzzling things through, the boy comes to what seems like a logical conclusion, which goes something like: "We're all in slightly different universes, and overlapping partially, but the two of you do not overlap." That statement makes perfect syntactic sense, and sounds like an explanation, while not actually explaining anything. Anyways, it's very much in line with his general style, giving the impression of a fully-realized alternate reality while leaving its details completely opaque.

I'm not sure if we can actually work out precisely what's happening with these three, or even the story as a whole. One pretty compelling possibility is that it's all a hallucination. There's a brief statement the boy makes fairly early on, along the lines of "I'm not dumb, but I was bitten once by a big black dog, and my head hasn't been right since." Something about his trip to the library might have frightened him, triggering a waking nightmare.

Of course, since this is Murakami, the rational, naturalistic explanation isn't a slam-dunk. It could all be "really" happening, which is especially worrying if you follow the boy's train of thought about the scene repeating in libraries all around the country.

While it isn't supported in the text, I've also been drawn to thinking about the significance of this taking place in a library, and among books. When the boy reads about the Ottomans, he becomes a tax collector, fully inhabiting the body and memory of this character from history. Is it possible that the Sheep Man and the girl are characters in their own respective novels? The boy has read both of them, so they share space inside his head, but one novel does not have knowledge of what another contains. (I don't think this is actually the case, but it was a fun thought experiment for me.)

In general, The Strange Library feels like a very condensed version of Murakami. We encounter a large number of the signifying elements and emotions that are hallmarks of his work, and see them deployed effectively in a very brief, efficient story. I hesitate to recommend this to first-time Murakami readers, since the overall impact of the book is much less.... buoyant, I guess, than I'm used to. But for those who already enjoy his worlds, and want another taste, this is a great little nibble.
Posted by Christopher Charles Horatio Xavier King III, Esq. at 6:36 PM