As I briefly noted earlier, I've started casually playing through The Lord of the Rings Online and found it a surprisingly relaxing, fun experience. Not too much to report, but I figured I'd share a couple of observations. 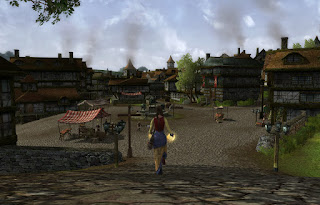 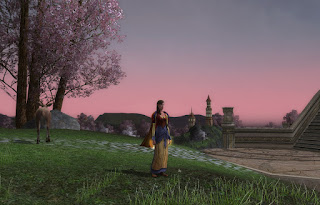 Things I'm a bit indifferent to: 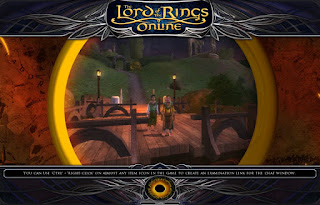 As you will not be shocked to learn, I've been taking some screenshots of my experiences and assembled them into an album. It's pretty interesting to look through... a mixture of gorgeous settings and badly dated graphics.

We'll see where things go from here. I'm up to level 19, pretty significantly overleveled for the content I'm currently doing in Bree; as with currency, it feels like Turbine has shifted the XP curve to hurry people along to later content, but that does mean that if you try to actually do everything in the game, you end up getting no meaningful rewards from the quests. Anyways, I'll wrap up the stuff in the Old Forest and Barrow Downs, along with any other Ranger business, then head on into the Lone Lands. I'm on a trajectory for reaching level 30 before terribly much longer, at which point I'll make the call whether to start spending money on the game or not. So far, the pleasures of adventuring in Middle-earth have outweighed the pains of playing a somewhat dated free-to-play game, so I won't be shocked if I stick a quarter into the machine to keep playing a while longer.
Posted by Christopher Charles Horatio Xavier King III, Esq. at 9:27 PM