“Lord of the Rings Online” used to be called “Shadows of Angmar”. I kind of think that they should rename the game again, this time to “Oh, That’s Pretty!”, since that’s what I keep on saying while playing it. 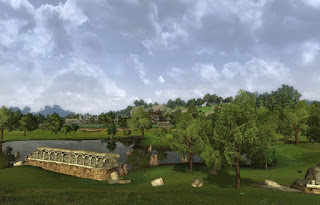 Not a whole lot new to report. The game is still gorgeous. I’ve traveled through Ered Luin, briefly through the Shire, and spent a pleasant long stay in Bree-land, the Old Forest, the Barrow-Downs, and surrounding areas. I’m currently working with the Eglain in the Lone-lands, including some great adventures around Weathertop. Each new area of the game yields stunning new vistas, and even old areas look astonishing when viewed again at different times of day and in different weather. 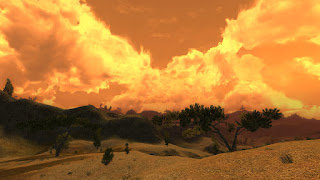 I think that I’m closing in on the end of the easily freely playable portion. I’m still having a lot of fun, so I’ll probably pay a bit of money to keep on going. I found what looks like a good guide for getting content efficiently; with the Steam summer sale starting soon, I should have a good chance at grabbing the Quad Pack, and around that time I’ll probably pay for a month of VIP, which should get my main (so far only) character pretty much ready for Moria.

One thing I’ve been struck by, though, is just how differently I approach seemingly mundane matters in video games compared to in real life. The one I’m thinking of at the moment is fashion. In reality, my clothing mission is simple: I want to spend the absolute minimum amount of time, money, and brain cells in order to meet the minimum level of social approval. If I spent less than $20 and nobody’s staring at me, I consider it a rousing success.

In games, though… wow! I’m absolutely willing to spend HOURS doing research, poring over different looks, scanning online fashion guides, looking at in-game mannequins and staring enviously at NPCs with bespoke outfits. I’ll gladly spend in-game money that could be spent on healing potions and swords, instead grabbing a cloak that comes in the perfect shade of midnight blue. Or, instead of slaying dragons, will patiently slaughter the entire population of Nugs in the Hinterlands so I can craft a breastplate with brilliant white fur trim.

Anyways. I’m at a complete loss to explain the discrepancy, or even why in-game clothing ever became interesting to me; it isn’t as if I was following the example of another player or something. And, while I’m currently thinking of this in the context of LotRO, it definitely isn’t the result of wanting to be perceived a certain way by other human players: I’m at least as conscientious about fictional avatar looks in single-player RPGs like Dragon Age and Fallout as I am in [my rare forays into] MMOs.

I noticed a similar tendency back when I was working on Shadowrun Returns campaigns, specifically around interior decoration. As anyone who has visited my place knows, my “style” can best be described as Spartan. I’m perfectly happy living for years with nothing on my walls, no real decorations, and have just automatically kept on using the same pieces of furniture I’ve had since graduation since they work perfectly fine and I don’t want to expend any mental energy thinking of alternatives. 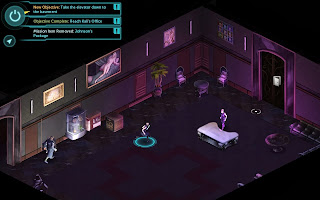 As soon as I start creating a virtual world, though, an entirely new personality takes residence in my head, and this personality has OPINIONS! About AESTHETICS! “Oh, no, no… Kali’s style is very sleek and modernistic, so her office needs to focus on neutral colors and glossy surfaces. That antique wooden desk looks fantastic, but it clashes horribly with her artwork. Let’s give that to Norton, it fits his warmth and eclecticism. Hrm, but the feng shui of this break room is way off. We’re channeling all of the energy into that dark corner, where nobody has a reason to go. Let’s examine A Pattern Language and see if we can find a solution… ah! Yes, let’s put a window in there, and lounge seating, while keeping the refrigerator and food preparation areas on the western side. That way people traveling through the office can quickly grab a snack without bumping into anyone, while those who want to spend some time eating lunch can do so in quiet and comfort. Oh, and the player’s probably running low on health after shooting their way through the four security turrets outside, so I should put two medium healthkits on the north wall. Hm… on second thought, the crimson of the healthkits clashes with the scarlet of the security alarm panels. Maybe I should put them over by the black dragon sigil? Ah, what a striking contrast!”

I don’t have a thesis or anything. It’s just another weird thing about myself that I don’t understand.

Oh! More photos in my album here. There's a bit of light narrative in there about my character's quest, but frankly, I haven't really encountered anything yet within LOTRO that would qualify as a "spoiler", particularly not for anyone who has read the books or even seen the movies. It's very much about the atmosphere and not so much about the plot.
Posted by Christopher Charles Horatio Xavier King III, Esq. at 9:09 PM