I spent a very pleasant couple of weeks participating in activities for the Spring Festival for Lord of the Rings Online. Along the way, I've gained newfound appreciation for the unique pleasures of this game and my own evolving preferences for gameplay.

The festival lasts for a limited amount of real-world time, during which the game world offers a variety of fun activities and some rewards that otherwise aren't available. It exists in an interesting sort of parallel to existing game systems: you still gain XP as normal for completing quests, and I probably gained levels as quickly by celebrating as I would have through normal questing. But instead of getting level-appropriate gear and item rewards, you receive Spring Leaves or other special tokens which, in turn, can be redeemed for cosmetic clothing, household furnishings, steeds, and other objects which aren't swords. Not to mention that you can attend dance lessons and learn how to dance like a hobbit, like a dwarf, like an elf, or one of those silly humans. 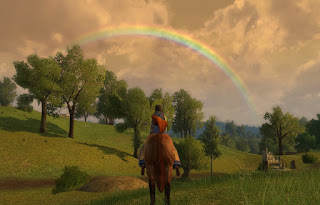 I quickly got into the spirit of things and began spending all of my in-game time pursuing these activities. While in these social areas, I took advantage of the game's fantastic cosmetic outfit system, putting on something appropriately festive and spring-y. However, it began to bug me that Taharien was still visibly dragging around a club and a wooden shield: very useful items in the Lone-Lands, far less crucial when running through hedge-mazes. So I moved those items into my inventory, figuring that I could easily re-equip them when needed.

I think that might be the single most representative example of my time with the spring festival: I didn't even have a weapon equipped for well over a week, and didn't miss it at all. Instead of killing monsters, I was racing horses, balancing on wooden beams while blind drunk, picking flowers, stomping on shrews with giant boots, going on epic pub-crawls, scolding rambunctious tweens, confusing elves, delivering booze, chasing chickens, drinking some more beer, drinking cider, helping sweethearts find each other, dancing, drinking, planting flowers, and drinking. Oh, and also drinking a lot of alcohol. 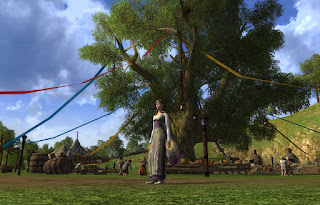 Anyways! I was really impressed that, in a fantasy roleplaying game, there was so much fun stuff to do that didn't fall into the typical RPG loop of "kill monsters so you can get better equipment so you can kill more monsters." In my grumpy-old-man persona, I often point to the release of World of Warcraft as the turning point in the decline of western RPGs, particularly in how things like rogue classes are handled. In prior generations of games, RPGs were more about problem-solving, and classes like rogues could overcome obstacles through completely pacifist strategies like stealth and deception. With the streamlined combat-centric design approach of WoW, though, rogues were reinvented as nothing more than a burst DPS class, and even great franchises like Dragon Age have largely followed suit, losing the complexity and variety of different playstyles to instead focus on making the killing experience as engaging as possible.

So, it's both welcome and ironic that another MMO would give me one of the more satisfying combat-free RPG experiences of recent years, while I continue to blame the biggest MMO for taking those options away in the first place. (Not to say that there's no non-combat options in other RPGs, of course, but I can't think of the last fantasy RPG I played where I could literally go for weeks without fighting and deeply enjoy it.) I believe that a lot of the credit has to go to the source material. The Lord of the Rings obviously has fighting, both on smaller and larger scales, and the game does a great job at representing that part of the story. But when people think back on LotR, the battles aren't the only thing they remember. They remember the hobbits eating mushrooms with Farmer Maggot, meeting Goldberry by the spring, swatting away midges in the marshes, listening to Aragorn sing, wandering the halls of Rivendell, smoking pipeleaf in the ruins of Isengard, Frodo and Sam disguising themselves as orcs, and so on. Fighting isn't the point: it's something that's occasionally necessary, but isn't really glorified, and the ultimate hope of the entire quest is to put an end to Sauron's aggression. With all of that as backdrop, it makes sense (and is fantastic) that the game designers would put so much care and attention into the other activities that make up the game beyond combat. It feeds into what I love most about this game, how it makes Middle-earth feel like a place where people live, not just an orc-slaying simulator. 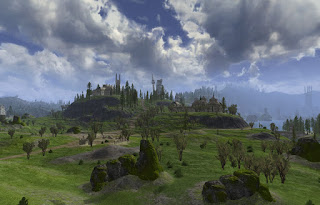 As I mentioned above, the spring festivities included a very wide array of drinking games. This included the pub crawl, an epic circuit through the Shire that requires stopping in at a good eight or so bars, downing a half-dozen alcoholic drinks at each one before moving on. As the “quest” progresses, your vision and movement grow impaired. Early on, the world seems to grow a bit brighter; after the first few stops, the camera begins to grow a bit unsteady, swaying off the center axis, making it a bit trickier to navigate; by the end, you’re suffering from double vision, trying to figure out which of the two floating mugs in front of you is the real one you need to click in order to down the next beer. Your character’s speech also grows slurred, and they start singing to themselves and hiccuping. It was surprisingly fun, and I spent some time thinking about why I was enjoying it so much. To put it bluntly, I’ve never gotten that drunk in my life: never had a blackout, never lost control of my movement or vision to that kind of an extent. The video game ended up being a way that I could sort of vicariously have that experience. This is the sort of thing that we often look to games for: to provide us with the experiences that we will never have in real life. I’ll never fight in a war, but I can shoot guns in Half Life; magic isn’t real, but I can cast fireballs in Dragon Age; I’ll probably never make it into space, but I can explore the galaxy in Mass Effect. And, on a more mundane level, I COULD get blackout drunk, but I probably won’t, and instead will experience a simulacrum of it in Lord of the Rings Online. 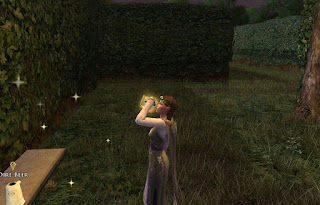 As I write this, I realize that it probably doesn’t sound like a good thing: drinking can be a real problem, and the lighthearted treatment here may downplay the risks. The worst example is probably that LOTRO has the most fun drunk-driving simulator ever. On that pub crawl, there’s a time limit involved, so if you want to complete the quest, you’ll need to hop on your horse to make it in time. But when you’re on that stretch from Stock to Frogmarsh, you’re three sheets to the wind, and your horse will be crashing into fenceposts, falling into ditches, colliding with other riders on the road. It’s all consequence-free within the game context, and very amusing from an in-universe perspective, but becomes rather horrifying once you make the connection from horses to automobiles. It becomes a relief when the next pub lies along a stable route, so you can take a “taxi” instead of driving yourself when you’re in no condition to navigate the Shire. 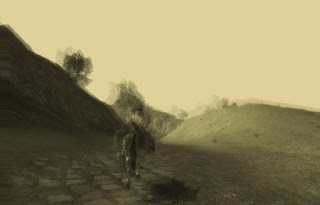 The pub crawl was the most memorable, but there are also quests that involve delivering speciality drinks to Inn League members, and one that involves drinking a Bullroarer concoction and then running along a plank without falling off, and my personal favorite, where you have to find the middle of the Hedge Maze, drink from a huge sinister keg, and then make it out of the maze before you black out. I failed once, and was delighted/terrified to find myself transported to frozen Forochel. And of course there are plenty of non-drinking games, most of which involve spring themes of planting and growth.

As a side bar, going through this festival has given me a better understanding of and appreciation for Fallen London’s own seasonal events. I’ve greatly enjoyed participating in Hallowmas confessions and Feast of the Exceptional Rose liaisons and Christmas lacre-shoveling. I’d kind of thought of those as being their own idiosyncratic things, but I now see how they fit into a larger tradition of time-limited events in persistent-world multiplayer games. (The two other MMOs that I spent any appreciable time in, Ultima Online and Star Wars: The Old Republic, were early enough that they didn’t have fully-evolved seasons, whereas LOTRO has had eight years to build up its traditions.) Of course, Fallen London isn’t an MMO, but these events do provide a similar opportunity to shake things up and interact socially with other players, as well as a chance to break up whatever routine your character is currently engaged in (leveling up, buying an Overgoat, gaining Notability, etc.) and do something that can be enjoyed at all stages of a player’s career.

Anyways. The spring festival is over. Oh! And the Steam Summer Sale is over too, I just realized I forgot to mention that. I’d kept my eye open and grabbed some good sales on the Quad Pack, Helm’s Deep Premium Edition and Steely Dawn. Those unlock most of the game for me, and leave me with a tidy sum of Turbine Points for grabbing the remaining quest packs I need along with some cosmetic/quality-of-life enhancements. Story-wise, I’ve completed the Lone-Lands and am now traveling through Evendim, along the shores of the beautiful Lake Annúminas. That should get its own blog post at some point - LOTRO continues to open up Tolkien’s world in ever-more beautiful ways. 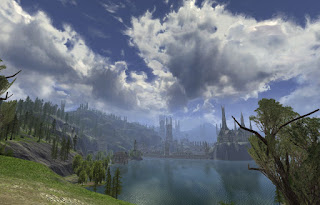 Shifting from questing to celebrating and back to questing again, I’m finding that playing LOTRO is one of the most relaxing experiences that I’ve had. I’m surprised that I’m responding to it so positively, because “relaxing” isn’t something I typically look for in a game. I tend to play games because I want to be challenged, or I want new experiences. I’ve often looked down upon people who play “casual” games that seem to require little effort. After these last few weeks, though, I can totally understand the appeal. It feels so pleasant to log in, inhabit my character, and spend time just immersing myself in the calm beauty of Middle-earth. Yes, there's fighting, but there's also dancing and singing and drinking and sightseeing and wandering. Not all who wander are lost, and I feel like I've found the place I've been searching for since I was a little boy.

Edit: I forgot the pictures! Entirely too many are available in my latest photo album.
Posted by Christopher Charles Horatio Xavier King III, Esq. at 8:48 PM