Time for another quickie: I really enjoyed “Yes Please”, Amy Poehler’s new-ish book. It’s kind of a memoir, but in addition to a few autobiographical portions it also gives some behind-the-scenes insight into her time with institutions like the Upright Citizens Brigade, Saturday Night Live and Parks & Recreation, along with a few essays sharing her thoughts on various topics. 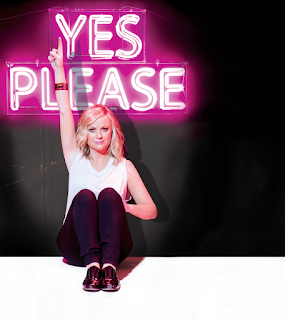 Like almost everyone else, I feel like I know Amy despite having only seen her on television. That same personality shines through here: she’s bright and enthusiastic and transparent, with occasional traces of a cheerfully dirty mind, wearing her heart on her sleeve and hoping for the best from everyone. She has to walk a bit of a tightrope here between her readers’ understandable desire to know EVERYTHING, and her own need for occasional privacy. The biggest example of this is her divorce from Will Arnett, which she addresses head-on here; she describes how sad she felt and how she’s glad that the two of them have continued to cooperate for the sake of their boys, but she never speaks about what precipitated their separation (candidly explaining that it would make her too sad to talk about).

That’s one of the few incidents where she’s less than totally open, though. She has a chapter talking about her history of drug use (one of the more positive examples I’ve seen, with her demarcating each type of drug she has and hasn’t used and her evaluation of each), describes her unmoored sexuality in the aftermath of the divorce from Will, and even talks about what kinds of porn she enjoys watching. She maintains a strong level of meta-awareness, though, and within the text she will explain what she hopes to gain by sharing this level of confidence with “us.” I imagine that this comes from her strong improv background: she’s getting the most from each moment, but also thinking about how those moments will contribute to the whole.

Oh, and it's also really funny. Again, if you've seen Amy perform you have a good idea of her voice, and that voice is on fine display here. Some of the humor comes from recounting old stories or things that her cast mates did to one another, but much of it is just her overall attitude reacting to and commenting on the things in her mind. Even the darker sections of this book never go too long without her injecting a moment of levity, and it never feels forced, just the result of the kind of person she is.

So, yeah! It's a really funny book, and also very good-looking and well put-together (much like a certain performer I could name), with good photos and engaging layouts and wonderful scraps of ephemera. If you'd like to get more Poehler in your life, this is the best way to do it.
Posted by Christopher Charles Horatio Xavier King III, Esq. at 7:20 PM