I'm not a particularly social player, even in multiplayer games, but I've recently enjoyed participating in a few player-run events on the Landroval server. First up was the Festival of the White Lady. I randomly heard about this thanks to a Regional announcement when I happened to be traveling through the Trollshaws - I turned off World Chat long ago and am very glad that they advertised in this manner, because otherwise I wouldn't have heard about it. 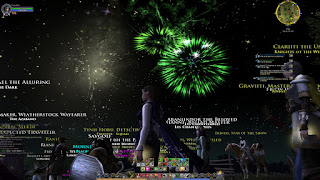 As is my wont, I took a bunch of screenshots. It was a really fantastic, joyful, heartwarming event. A wide variety of people attended, and I saw pretty much all of the major Landroval kinships represented. Even though the weather was overcast, the mood was appropriately celebratory, with almost nonstop dancing throughout. The Remediators performed at all the stops and put on a fantastic concert. I was pretty happy to have invested time during the Spring Festival in learning several dances and picking out a nice outfit, and it felt very rewarding to put them to use. 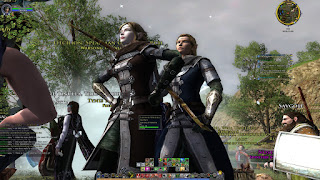 This past weekend, though, was a huge event: Weatherstock! This is a giant concert that's held every year, with many different bands playing for the benefit of a crowd assembled at the ruins of the watchtower of Amon Sul. I'd heard a few passing references to it before, and was looking forward to checking it out for myself.

As a bit of background: Lord of the Rings Online has a surprisingly robust music system. There are a dozen different instruments (clarinets, lutes, drums, horns, etc.). Clicking an instrument will cause your character to strum a little tune, but the really impressive part comes when people actually play their instruments. You can press keys on your keyboard that correspond to notes on your instrument. Strike the right notes at the right time and you have a melody. Get a group of people doing this together and, hey presto, you have a band!

What kind of music do people play? Well, pretty much anything. There are some terrific transcriptions of popular songs, classical and folk music (including lovely versions of the music Howard Shore composed for the film trilogy), and more than a few original compositions. It's really fun to see such a mix, and I imagine that different people and playstyles will be drawn to different modes of recreation (with pure roleplayers avoiding anachronistic tunes while others embrace them). Much like a real-world big music festival, though, part of the pleasure of Weatherstock is all sorts of different fans coming together and getting exposed to music that they might not ordinarily listen to.

And, really, that's the part of this whole experience that fascinated me the much: just how much it ends up feeling like a physical concert, despite occurring solely in the Internet and in our minds. While there are a few explicit rules that are tied to the technological demands of assembling so many player avatars in a single place (take off your cloaks and hat, don't ride your warsteed), a whole slew of implicit mores are imported as well. In the game, unlike the physical world, there's nothing keeping two or more objects from occupying the same space at the same time: if you charge into another character, rather than bounce off of each other, you'll simply walk though one another. And yet, players are very careful to position their avatars to make sure that they give some "physical space" to other avatars. When dancing, they'll check and adjust their positions to ensure they don't clip through others. When someone is speaking or playing music, most players will be facing them, even though we as players can point the camera anywhere we want to.

What I found most interesting, though, was how players would smoke and drink. There's no in-game benefit for doing either of these. But, it's something people do when attending concerts; and this was a concert; and so people drank and smoke. I don't know why, but that fascinates me.

I shouldn't imply that I was some disinterested observer here, either. I did the same, following social cues and my own reasoning. For some higher-energy shows I attempted to "keep a buzz going" with periodic ingestion of alcohol; in the calmer ones, I relaxed and listened with clean senses. I've never smoked in real life, but in the game I would take advantage of a break between songs to pull out a pipe and have a few quick puffs. (As noted in my earlier festival post, the game has been a terrific outlet to have vicarious experiences that I've never encountered in the physical world.) Perhaps most interesting, though, the way I physically approached concerts was almost exactly the same as my standard MO in real life. I would come in and circle around the periphery of the crowd, keeping an eye on where clumps of people were gathering. As time went on and pockets opened up, I would gradually work my way closer to the stage: never crowding anyone, but steadily drawing closer to my goal, until I had arrived at an optimal vantage point.

This was the seventh Weatherstock, and the Lonely Mountain Band (the kinship who organizes and runs the event) has it down to a science. Most people met at the Forsaken Inn in the Lonelands for a pre-party, then we all mounted up and undertook an epic, ultra-laggy procession to the peak of Amon Sul. Along the way, the LMB helped keep the path clear of hostile critters - the enemies in this area are low enough that I and many more experienced players don't draw any aggro, but they can still be a threat to very low-level characters, and since many people log on to Landroval only for major events like Weatherstock, there's a good number of low-level people. 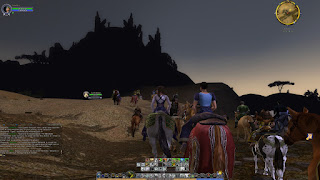 All of the LMB members who helped organize the event wore colored uniforms to denote their role: opening band, or security team, or the ever-helpful vending team members in yellow. I actually hadn’t ever done any in-game trading before and was curious how it would work, especially with such a large crowd. The answer is, very smoothly. I started up a trade session, the vendor immediately popped in a small assortment of festive supplies (ale, pies, Hope tokens), I entered a random amount of silver coins to donate, and boom! Traded! Later on, they announced a limited supply of drums for sale; I sent a tell to the nearest vendor, he initiated the drum, I donated some more. Boom! Sold! 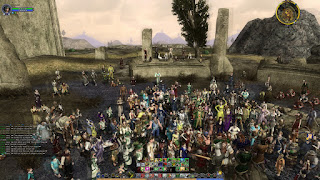 One of the big concerns in a gathering of this size is lag. It actually was fine for most of the concert, probably because most people were well-behaved and followed the rules. Even with so many people around and dancing, the only time it slowed down for me was when spinning the camera around, and even then it would just briefly hiccup. In addition to the “no hats, no cloaks, no horses” policy, they also discouraged people from setting off fireworks, using forced emoted, or (especially) group effects like mass heals. One of these eventually brought the whole event to a crashing halt: at the end of one song, someone cast a mass heal, and everyone froze in place, most stuck in permanent healing bubbles. We could still chat, but nobody could move or take actions. Eventually, everyone got kicked out of the server.

It took a while to get everyone back in and get the concert going again. I was able to rejoin almost immediately, but apparently other people had more trouble and had to jump through some hoops to get back. To ease the load on other people, the organizers encouraged everyone to sit down and refrain from taking actions until most people were back. This, again, felt a lot like many of the “hurry up and wait” experiences I’ve had at concerts in the physical world: rushing to get to the right place at the right time, then sitting around waiting for something to happen. It was actually rather pleasant, though. People were in good spirits, and we heard a couple of lovely impromptu solo performances from a few talented minstrels in attendance.

Finally the band was back together and in sync, and the concert started again, and… another jerk did the same thing, crashing everyone out. People were understandably bummed, and there was more shrillness in the next recuperation period. I was a bit bummed that, even after we had recovered, a lot of people were ordering people to stay seated and not dance. Dancing hadn’t caused any of the problems, and in any case, that’s one of the best things to do at a concert! Fortunately, after their set finished, people got more relaxed and it returned to a fun atmosphere for the remaining bands. 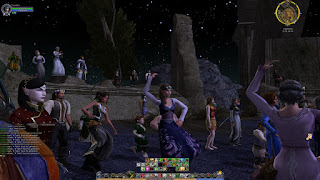 I mentioned before that there’s a huge variety of musical styles from bands in the game. Even with medieval/renaissance instruments, you can get a lot of the feel of rock, pop, blues, and other recognizable genres. The thing that may have impressed me the most, though, was the metal band. Partly because of the music - getting something that sounds like heavy metal without an electric guitar is quite a feat - but even more because of the audience. I watched in bemusement as dozens of dwarves stripped off their shirts and started moshing in front of the stage, jumping up and down, bouncing all around as the singer belted out Danzig-esque lyrics. “Nazgul! Nazgul!”

Because of the crashes, the concert series went longer than originally scheduled, but it looked like most of the people who made it back stuck around for the whole time. There are two sets of awards granted at the end of the night: one voted on by the Lonely Mountain Band, the other a “Free People’s Choice” award voted by participants. My personal favorite band was Starlight, which was very talented and also had great stage presence. They didn’t make it into the People’s Choice awards, but did snag third place from the LMB. The top two were actually the same for both LMB and People’s Choice, The Rolling Kegs and The Remediators, and it was well deserved: both bands were fantastic (as were all the performers - there’s an auditioning/vetting process to even play in Weatherstock, so anyone who makes it this far  is already really good). It was especially nice to see the Remediators end up on top after having spent so much time with them at the Festival of the White Lady. 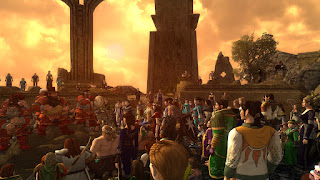 Everything got super-relaxed at the very end, with a very enthusiastic drum circle and people finally breaking out their fireworks. There was another mounted procession back to Bree, which initially was very laggy, but everyone got lost and ended up finding their own way back. 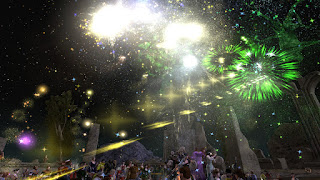 Anyways! I was really glad to have attended this. It was a weird but delightful experience, and I'm still mulling over the interplay between physical-world habits and virtual-world expression. It's tying into a slowly germinating thesis I've been gradually refining over the past year or so... that may be the topic of a future post, who knows!
Posted by Christopher Charles Horatio Xavier King III, Esq. at 10:07 PM