Okay, characters! This post will cover my selection and design for the crew members who join you over the course of the game. 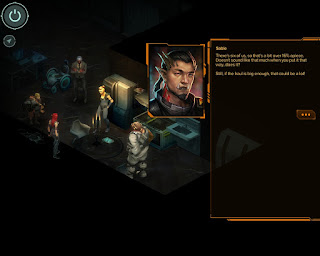 Crew dialogue is a separate topic that I covered in my earlier post on dialogue. Also, my process for selecting crew members and coming up with their general concept remained unchanged from Corona; you can see that post if you want to learn about my (very loose) process. This post will just cover the changes from that technique.

One big change was that I tried to be more methodical in sketching characters’ personalities. In the Antumbra games, this tended to evolve organically as I wrote them. I was pretty happy with the outcome, but thought it wouldn’t work as well for Caldecott. One major new component of Caldecott was the favor system, which tracks how well you get along with your companions. In order for this to work, I would need to make the characters vivid and comprehensible to players, so they could anticipate which decisions would please or anger them.

The implementation of this ended up being very simple. For each character, I picked a single principal that would be most important in their life. It would inform all of their dialogue and decisions. By consistently keeping this in mind, I could help make sure their personalities made sense.

(I haven’t been marking spoilers in these posts, but this is all spoilers from here on out.)

Rafik’s primary value is LOYALTY. For Rafik, loyalty is a very visceral, personal thing. He doesn’t feel any sense of obligation towards institutions, but if someone does him a solid, they’re on his good list for life. Conversely, if someone breaks Rafik’s trust or reveals themselves as an enemy, he’ll hold a grudge forever.

(As with most of the companions, this doesn’t really map directly onto a traditional “good vs. evil” axis. Rafik can easily be perceived as the "good" companion, but he doesn’t have any compunction about robbery or murder, so long as he’s working with people he trusts and targeting people who he thinks deserve it.)

Persi’s primary value is INDEPENDENCE. She is drawn to the open road, to unfettered freedom. She resists anyone who tries to force her to play a certain role or restricts her actions. She’s perfectly happy on her own, and will only join up with others when the bonds are loose and they don’t hamper her flexibility.

Sable’s primary value is CURIOSITY. He’s endlessly driven to understand how the world works, to have as many different experiences as possible. In Myers-Briggs terms, he’s 100% P and 0% J. He never passes judgment, just goes “That’s interesting!” and starts looking for the next thing.

Dorbi’s primary value is POWER. She wants to amass as much of it as possible and reshape the world according to her whims. She’s a cheerful megalomaniac who is convinced that she would do better in charge than anyone else, and so anything which advances her position is for the greater good. (Once again, this might sound “evil”, but in practice Dorbi does often end up improving the world, even if it is for the wrong reasons.)

Having those principals in mind made every stage of writing easier. I came up with secondary characteristics as I wrote them, in large part to give them different speech patterns and make them “sound” more distinct, in addition to the content of their words being different.

Sable is upbeat and endlessly excited! He speaks with lots of exclamation marks! Along with many questions - wouldn’t you like to know the reason why? He has a splendid vocabulary, a veritable lexicon of obscure terminology that can sound overwhelmingly verbose in the context of Shadowrun.

Persi speaks in dialect, ya? Lotsa abbreviations an’ slang an’ such. It was a little difficult gettin’ the balance right, hopefully it’s readable an’ still gets the idea across.

Rafik tends to be more serious. He’s a straightforward guy. He speaks in impeccable sentences, as if he’s consciously thinking over each line before delivering it.

Dorbi is… just a little mischievous. She’s also very frank, and makes her feelings known. There’s no drama there, though. When she’s bored, she enjoys shaking things up with little non-sequitors. She’s also devoted to chaos, and will stir the pot to her own advantage.

One other feature I got to take advantage of in Hong Kong was the crew advancement system; this was added in Dragonfall: Director’s Cut, after I finished work on Corona, so I haven’t been able to use it before. What’s nice about this is it gives players the opportunity to help guide their companions as they level up; you can’t directly spend karma, but can choose special abilities to complement your player character’s strengths or cover for their weaknesses.

This is great for a couple of reasons. First, it increases the odds that any given character can be useful. If you’re rolling a decker, you can pick all of the non-decking upgrades for Sable and end up with a decent melee fighter who you might actually want to take along on missions. It also adds some storytelling potential. In Hong Kong, Duncan’s two tracks explored two different approaches to combat (lethal and non-lethal). There were gameplay implications to these choices, but they also resonated with the storyline in a nice way.

In Corona, the crew members were hyper-specialized. Norton was a pure support shaman who had literally zero offensive abilities. Hailey was a technological wizard who was useless at combat. On the other extreme, Elorn was terrific at destroying enemies with his guns, and couldn’t do anything else.

In contrast, Caldecott’s crew members are mostly “dual-classed”. This has a couple of advantages. First, if the PC is specialized, they should be able to outpace whatever the NPC is doing, which helps keep them feeling special and powerful. It also increases the usefulness of the crew advancement choices, so you can tilt into one of two fairly different builds and end up with something good.

Rafik’s two tracks are “Man of Faith” and “Man of Action”. The former is his Shaman track. These choices help him support his team by buffing and healing them. The latter is his pistol-wielding samurai track, which makes him a more effective damage-dealer.

Sable’s two tracks are “Hacker” and “Slasher”. A Hacker is a Decker, so this will give him upgraded skills and equipment for penetrating the Matrix, likely as the team’s primary decker. Slasher finds him embracing his pirate lifestyle, engaging with enemies up close with his devastating blade.

Persi is always a rigger, but her “Rigger” track doubles down on these skills, giving her abilities similar to what Racter gets in Hong Kong. “Demolisher” supplements her already-decent shotgun skills, letting her directly participate in combat.

Dorbi is always a mage. She’s introduced as a fire mage, which was the role she played in Corona, and her “Hellraiser” track continues that theme: lots of direct damage, area-of-effect attacks, and damage-over-time punishment for her enemies. Her new “Demagogue” track reflects her renewed climb to power, granting her the ability to confuse and dismay her opponents.

Sadly, I ended up needing to gut this entire system at the 11th hour.  😢  There's a bizarre bug that affects all UGC for Hong Kong which breaks the game when you try to save with crew advancement enabled. I'd been petitioning Harebrained Schemes to help fix this for over a month, putting the entire mod release on hold, just to get frustrated when they failed to address it at all. I'm still annoyed at how that all played out - if they had just said that they wouldn't fix it, I could have release this a month ago, and if they had actually fixed it, I would be releasing a much better game.

Some other random crew notes before I close this section out:

Rafik was originally named Destin, and all 400+ pages of dialogue that I wrote calls him this. Once Hong Kong came out, I thought, “Crap!” In Hong Kong, the first companion you get is an ork male named Duncan who has a background in law enforcement and is especially close to the player character. It was too late for me to change any of the story or design for Destin, but I figured I could at LEAST change that name to sound different. I spent some time on baby dictionary web sites before finally settling on Rafik.

Speaking of which, it wasn’t until right before I published Caldecott that I realized that, purely by accident, each of the main companions had a name that was exactly 5 letters long. That’s a fun little parallel to my accidental naming scheme of Antumbra, where each character’s name started with the same letter as their race (Dalmin the Dwarf, Turm the Troll, Orion the Ork, Hailey the Human, Elorn the Elf, Dorbi the Dwarf).

There are two other “secret” characters who I internally treated as crew members, although they don’t get advancement tracks and I don’t think most players will think of them as crew. Kora was a lot of fun - she’s a sweet woman, almost a mother figure, who plays some light mechanical roles (such as fencing paydata) before unexpectedly getting her legs back, picking up an SMG and a cyberdeck and joining your crew. I really like the idea of a player who you already know suddenly taking on a new role. Mechanically, this was important because, if you play as an awful person, you could lose all of your crew before the endgame, in which case you would need to have Kora as a decker and to play certain crucial roles in the narrative.

Finally, there’s Zielor. He’s… kind of a red herring, I guess? The most obvious inspiration for him is General Leo from FF VI, although their personalities are almost totally opposite. Zielor is set up as your immediate and most obvious antagonist: he is (spoiler) the person who kills you in the first scene, who ambushes your team repeatedly, and seems to be exacerbating the problems in Orkland. He’s also despised by Rafik and Kora, who are probably your two most trusted companions. And yet, in the bigger context of the game, he’s not one of the bad guys, and might even be seen as fighting on the good side, albeit in a warped sort of way.

Zielor is one of the major branching points of the game. IF you play in a certain way and make certain dialogue choices, you can convince him to join your team and fight by your side for the big finale. Otherwise, you’ll need to fight him and kill him once and for all.

I was careful not to make Zielor seem “too” good… he might be hard to “unlock”, but that doesn’t necessarily mean that everyone would WANT to unlock him. As usual, I try to treat gameplay and story as interwoven but not intertwined… ideally, the player will be left staring at the screen, mulling over the various harms that Zielor has caused, wondering whether the advantages he would bring to the table are worth the risk of recruiting him.

Okay! That will take care of characters for now.  Lots more to say, but not without getting into a rundown of the entire game plot. And, well, that’s what the game is for!
Posted by Christopher Charles Horatio Xavier King III, Esq. at 7:35 PM