Music was one of the biggest inspirations for Caldecott, and also one of the greatest frustrations. The module ended up getting published a month after I had initially planned, largely because Harebrained Schemes had removed all of the old music from Dead Man’s Switch and Dragonfall from the game when Hong Kong came out. The new music was fantastic, but very tightly connected to the Chinese setting of the game, and much of it just doesn’t fit at all into the environments I was creating. I hate being a pest, but spent several months repeatedly shouting into the well of HBS "support", hearing only my own voice echoing back at me. They still haven't restored the missing content, but I could feel my enthusiasm rapidly slipping away, so I bit the bullet and released the game in a much more mediocre state than I had hoped. It felt like trying to build a house using nothing but screwdrivers, as I kept trying to figure out how to use my inadequate tools to achieve the dramatic mood I needed.

But! This post isn’t about whining, it’s about music. Pretty much all of Antumbra and Caldecott were created while I was listening to music. My introduction to Shadowrun modding coincided with me getting deeply into synth pop, and that music has been a source of inspiration and motivation. I’ve continually expanded my awesome Pandora station, which I love and only listen to while modding; I also occasionally pull in specific albums or Beats playlists when I’m jamming on something in particular. 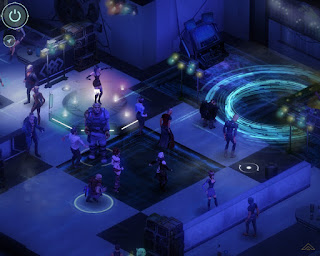 Anyways. Between the time when I finished writing initial dialogue for Caldecott, and when I actually published it, I started idly thinking about theme songs for all of my various characters. This is what I came up with. It’s a bit hard to define, but basically it’s a combination of the mood of the music and the lyrical content. (Sometimes because the lyrics seem to apply to the character, other times because it seems like something the character would say about someone else.)

No explicit spoilers follow, but the list is kind of spoilery if you haven’t played through the game before.

Rafik: Under the Tide by CHVRCHES.
Sable: Amor Fati by Washed Out.
Dorbi: Pretty much anything from Florence & The Machine, e.g. Drumming Song or Seven Devils.
Persi: Patti Smith, especially Gloria or Babelogue. And maybe also a little hit of Pure Morning by Placebo.
Horatio: Olde-tymey megaphone music.
Tolar: Bitch Better Have My Money by Rihanna.
Orion: History Has Its Eyes On You from the Hamilton cast recording… and, for good measure, Yorktown (The World Turned Upside Down) from the same.
Kroin: I Shall Ne’er Surrender You by Richard Paul.
Kora: The Gift of Freedom by Charles Webster (ft. Lisa Lindley-Jones).
Zielor: The Hand that Feeds by Nine Inch Nails.
Claude Bullion: Killing in the Name by Rage Against The Machine.
Ava Montalvo: Two Points by The Glitch Mob (ft. Swan). Runner-up: Bachelorette by Bjork.
Eriana: Bassically by Tei Shi.

And, finally, some songs that don’t really connect to any particular character but are (to me) very evocative of the game as a whole:

General setting and feel: Overdrive by Invocation Array.
Theme: Empathy by Crystal Castles (Alice Glass).
Plot: Help I’m Alive by Metric.
Player character’s journey: Be a Body by Grimes.
Most succinct summary of the game: Lean On by Major Lazer. (“Blow a kiss, fire a gun. We all need someone to lean on.”).
Final act: Panic Switch by Silversun Pickups.
Posted by Christopher Charles Horatio Xavier King III, Esq. at 8:48 PM