Thanks to the largesse of Andrew, I’ve finally made my foray into Wasteland 2. Due to the magic of procrastination, my first experience is with the Director’s Cut, a significant overhaul that reworks many of the core mechanics of the game, and also tweaks a lot of the existing missions and characters. For some reason, Director’s Cuts seem to be an emerging trend among mid-sized studios with flagship Kickstarter properties: Harebrained Schemes with Dragonfall, inXile with Wasteland 2, and Larian Studios with Divinity: Original Sin have all made DC/Enhanced versions, and in every case have offered them for free to both backers and regular purchasers of the original versions. I’m a little curious about the calculus that makes this sort of re-work viable for studios at this scale… but that’s probably speculation for another post. 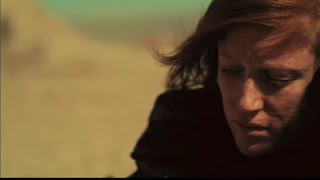 I’ve carefully avoided spoilers for Wasteland 2, but have taken a few specific tips in constructing my squad and orienting myself. I’ve been playing for a while, but am pretty sure that I’m still fairly early in the game, having recently reached Level 9 with most of my characters. I expect this will end up being a fairly massive game, so I wanted to do a little pre-post first to capture some of my initial reactions. No story spoilers in here, but some discussion of game mechanics and such.


SKILL / FAILURE SYSTEM. I’ve actually read about this previously in Kickstarter updates to Torment: Tides of Numenara, but now that I’m actually playing with it, I see what the big deal is. It’s an excellent system that rewards you for investing skill points in relevant skills (by giving you a greater chance to succeed at tasks), maintains tension (by keeping a chance-based approach to success), and minimizes the incentive to save-scum (most failures can be re-tried). My single favorite dynamic is probably safecracking. If you succeed, the safe opens. If you fail, it does not, and you can try again. If you critically fail, the dial falls off the safe, and you can no longer attempt to open it. BUT, if someone on your squad has Mechanical Repair, they can attempt to fix the safe, and if they succeed, you can try opening it again. Crucially, you gain XP for fixing the safe as well as for opening the safe, so the “critical failure” may actually lead to a net benefit. It’s a really dynamic system, and I love it. 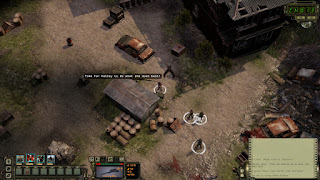 AMBIENT WRITING. There’s terrific flavor text when you enter new areas or approach interesting landmarks. This isn’t presented modally, and you don’t need to read it or click through anything, but people who are interested can easily read it on-screen. It’s very well-written, but also recognizes that not everyone will want to spend time with it.

XP GAINS. You get XP from defeating enemies and completing quests, of course, but you also get ridiculous amounts by completing myriad tasks. Disabling booby-traps. Healing teammates’ wounds. Picking locks. Bashing down doors. Fixing robots. All sorts of common tasks grant significant amounts of XP, often more than you would get from defeating a foe, which nicely rewards you for exploration and other non-combat activities.


4-PERSON SQUAD. I haven’t historically been a fan of Icewind Dale or other RPGs with multiple PCs, but it works pretty well here. There’s a lot that you do give up: no backgrounds for any characters (other that what you write yourself in their Biographies), not much personality, no opportunity for banter between PCs (I miss Divinity’s innovation here). But it fits really well with this game’s setting, with its post-apocalyptic, dangerous world with perma-death and disposable characters. I’ve coped with the limited dialogue by switching between characters during conversations, letting each PC deliver the lines that seem most appropriate to them. (Hailey when offering to help or discussing technology, Dorbi when seeking to manipulate or discussing explosions, etc.). This has zero in-game impact, but leads to a more engaging narrative in my head. 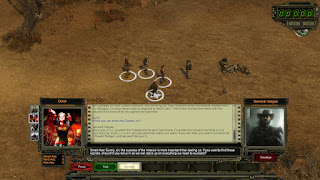 MAP SYSTEM. It’s simple but effective. Major landmarks can be placed on your map by others, but the terrain is unknown until you travel there yourself. Along the way you can uncover oases and other points of interest. It keeps things interesting while not being needlessly complex.

INVENTORY / LOOT. There’s a weight limit, but it isn’t too onerous, even at lower levels of Strength (at least in the early part of the game). Items that can be safely sold are helpfully marked as “junk” and can all be sold with a single click. Other seemingly-useless items can be sold at will if you need ready cash, but if you wait until you find people who need them in particular, you can earn much more. It's too early to pass my verdict on the economy, but so far it seems decent... I spend money on precious .30-06 ammo for my sniper rifles, and once or twice a gun or piece or armor that looks worthwhile. 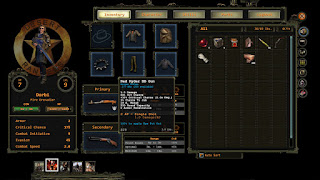 WRITING. It’s pretty bleak, with a side order of goofy. Plenty of dark nihilism for people who enjoy that thing, along with occasional opportunities to feel like you’re doing good in the world.


COMBAT. I’m mostly comparing this to Shadowrun, since that’s the system I’ve been using most lately, and there are a lot of similarities (turn-based, AP-based, etc.). The system in Wasteland is much more granular: individual people get initiative, rather than entire teams, and usually have around 8-10 AP to spend, rather than 2-3; in Shadowrun, a single attack is generally 1 AP, while in Wasteland it can range from 3AP for a pistol shot to 7AP for a sniper rifle. The initiative system can lead to some annoyances, such as when you can’t move a PC out of the way before a friendly fires a shotgun, or when your pistol-user gets to shoot before the sniper and you’re forced to overkill. Still, I think this has more to do with my own limitations than those of the system, and hopefully I’ll adapt to it.


VOICE ACTING. It isn’t bad, but can sometimes be annoying, particularly when someone’s doing a fake accent or speaking very slowly. Fortunately you can click through to advance, but that sounds a little weird as well. I’m decreasingly enamored of the portrait-and-text-plus-speech approach; I love fully-voiced games like Dragon Age, but that requires a fundamentally different writing style than what’s used in old-school CRPGs. The former is like a movie script, the latter is novelistic, and mashing them up tends to end poorly.

WALLS OF TEXT. This has been fine for most of the game, but entering the Citadel was a bit overwhelming: a dozen Rangers and dozens of books, with tons of text to get through and virtually no gameplay. Of course, I could have approached this differently - not talked to everyone on my first visit, or saved the books to read through later, or just quickly clicked through everything - but I’m OCD enough that I felt compelled to absorb everything, and felt overwhelmed and bored by the end. It’s a tough design problem to solve; ideally you would parcel out this sort of lore and character-introduction in morsels so they feel more like rewards and less like drinking from a fire hose, but narratively there isn’t a good way to split this up (other than the step they already took of denying access until you’ve played the game for a bit).


That’s it! My screenshot finger has been itchy, which isn’t great… I’m mostly taking shots based on humorous dialogue or writing, leading to lots of identical-looking screens with unreadable text. Still, I’ve annotated them and tossed them up on an album, here for your reading pleasure.
Posted by Christopher Charles Horatio Xavier King III, Esq. at 7:15 PM