Thanks to my brother's munificence (no, my other brother's munificence), I recently acquired the long-awaited continuation of Neil Gaiman's Sandman. In keeping with his other work, this is a prequel: the story still ends how it ends, but Overture depicts the events immediately preceding Preludes & Nocturnes, and in so doing it reframes and adds context to the later (earlier) story. 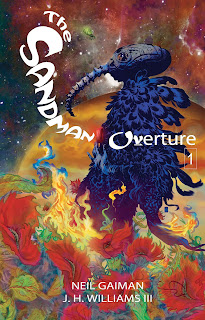 One of the most distinctive things about the original Sandman is its extremely varied art. The book regularly switched between artists over the course of its run, with each new one bringing their completely original style to the series. Characters' iconic signifiers remained the same (Death's ankh, Dream's dark garb and starry eyes), but they could look completely different, veering between realism and highly stylized cartoons and gorgeous impressionism.

Overture only uses a single artist for its run, but Williams keeps the tradition alive by switching up his style over the course of the book. This is especially true in the back half of the book, when we see representatives of the many galaxies being destroyed. They are truly alien, and so each demands its own tradition of depiction. They vary from a hyper-intelligent (and extremely contagious) bacterium to a star to a machine and many more.

One minor disappointment for me was that Overture breaks Dave McKean's incredibly run at making covers for Sandman, relegating him to a single variant. However, the new covers are wonderful. I should embrace the core message of Sandman and relish the good in this change.

My favorite character in this arc is probably Hope, and that's due in no small part to her art. She has a unique look, vaguely African but simultaneously alien, and projects a terrific combination of curiosity and determination: when she makes up her mind about something, her jaw sets and she stares straight forward, her braids aligning in a row that perfectly communicate her resolve. 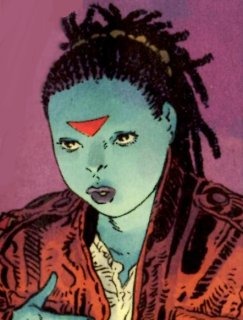 A lot of old favorites return too, of course.  I would have enjoyed more Death, but that's nothing new: I always want more Death. To be fair, she did get her own spin-off from the original run, so she didn't "need" more time here. She technically has a lot of work to do during the story, and while she doesn't speak much, there are several amazing near-full-page depictions of her as she harvests entire galaxies.

Let's see... we get to check in with Desire and Despair, united as usual. Destiny plays a fairly significant role. Delirium gets a pretty big appearance, although not quite as large as I initially thought; the insane star sounded a lot like Delirium, and for a while I thought that they were the same. In retrospect, though, of course it makes sense that the star sounded like the personification of insanity.

Likewise, I got briefly excited when I thought that we were seeing Destruction, before I realized that it was actually their father. Which, itself, is really interesting, since it (visually) aligns Destruction with Time. That's pretty accurate, but also presupposes an entropic view of the universe. Dreams stand out of time, so it makes sense that Morpheus wouldn't be particularly close to his father. Delirium is similarly unhinged from time. Time explicitly says that Destiny visits him most often, which certainly makes sense: Time is the garden, Destiny the pathway. Desire and Despair tend to be rooted in the present moment, without much attention to continuity; Delight probably once shared this aspect with them. Death and Destruction are both inextricably connected with the passage of time, though, with Destruction holding the broader portfolio of the two: the erosion of mountains into grains of sand, the collapse of structures erected by men, the snuffing out of solar systems, the eventual heat death of the universe, all inexorably linked to the passage of Time.

It was really interesting to meet Night as well, although I don't think I understand her as well as Time. At least, not on a metaphysical level. Socially, it explains a lot about how dysfunctional the Endless are to see the way their parents relate to one another. I shouldn't be surprised that Neil Gaiman continues in the grand tradition of a storyteller: he has answered some questions here (how did Dream get captured?) but raised even more (what caused Time and Night to separate?)

One other question, which I had previously thought had been closed, is what changed Dream. In the other prequel stories and flashbacks to earlier periods in Dream's life, he's mostly defined by his rigid adherence to duty. He's not exactly cruel, but also unmoved by pity or compassion, whether towards himself or his enemies or his friends and lovers. Everything must be subordinated to his understanding of his role. This is different from the picture of Dream we see throughout most of the series: yes, he can be stern, but he is also capable of introspection, of re-evaluation, of picking a bigger good rather than a technically correct evil.

Within the series, this is explained by his imprisonment by Burgess. Spending this time in captivity, divorced from his power, and seeing the consequences of the unraveling, jolts his personality, changing him and making him tentatively accept the prospect of change. After reading Overture, though, I wonder if we should more properly ascribe some or most of his transformation to the events of this story. After all, it is this adventure which immediately preceded his imprisonment; he was captured before he had a chance to act or reflect on its meaning. Furthermore, during those long years in the circle, he may very well have been meditating on these very events.

On the surface, it would seem like this is a story that reinforces the old Dream and not the new: he failed to do his duty once long ago, and the universe nearly perished as a result, saved only with extreme effort and luck. And yet, the way he saves it points the way towards the new Dream. He discovers that he can bend the rules by sharing his plan with a non-living creature. That same creature was around only because he consented to travel with her, an act that very closely resembles compassion. He sees that Destiny's book is not infallible - how, then, can he be infallible himself? All of these tiny lessons point the way towards the freer, more thoughtful Dream that we will later know and love.

One question that inevitably arises when dealing with sequels is how they should be incorporated to the canon. Should one consume the media in the order they depict? Or the order they were released? I think it's hard to go wrong either way with Overture. You'll probably appreciate it a little more if you're already familiar with the Endless and their dynamics; but this is also a pretty good introduction to them, and it doesn't spoil anything that will come later (although there are some nice, very subtle foreshadowings). On the other hand, if you've already read and enjoyed Sandman, I highly recommend reading this as well. It's more Sandman, and that's a wonderful thing.
Posted by Christopher Charles Horatio Xavier King III, Esq. at 1:41 PM