After the arduous struggle through The Symmetry Teacher, reading Solitaire on my Kindle felt like a breeze. It's a good book, and also much more conventional than TST, while still offering up surprises along the way. 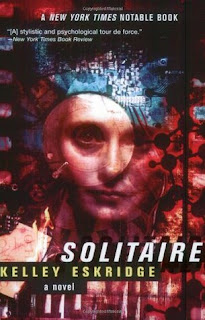 I came upon Solitaire while trying to answer the question, "What other books are out there like The Steerswoman's Road?" The answer is, there aren't any, but Solitaire belonged to a short list that sounded interesting and were well-reviewed. Unlike the Steerswoman books, Solitaire is set in the near future, in a world of sovereign corporations and virtual reality, populated by recognizable people and organizations. Now that I think about it, it wouldn't be a stretch to describe the world of Solitaire as cyberpunk, although it doesn't feel much like cyberpunk at all... while much of the story is grim, there's a fundamental belief in the goodness of people and the ability of working together which puts it at odds with the relentlessly dystopic and misanthropic tone of most cyberpunk. This is a world ruled by corporations, but they aren't necessarily bad, you just need to understand how and why they work.

Actually, that was one of the things I appreciated most about this book: just how seriously it takes Ko. There's a tendency, particularly in science-fiction, to treat corporations as faceless, abstract, evil entities. Of course, any corporation is ultimately made up of people, and has its own culture, mores, and internal factions and rivalries. Ko is interesting because it's a sovereign corporation, so it takes on many of the traditional responsibilities of a state (child-rearing, housing, diplomacy), while primarily staying focused on making money. There are some ruthless, ambitious people at the top; but there are also people who got to the top by being bright, compassionate, and effective.

Solitaire is the first book I've ever read where a major character is a project manager, and it might be the first book I've ever read that has even mentioned project management. It isn't just an empty title that gets thrown around, either: through Jackal's eyes we come to understand what project management means, and how it can inspire a group of talented and antisocial individuals to cooperate in creating something great. It was particularly sobering for me to read this as a software developer; I have to admit that, in Silicon Valley, there's often a dismissive attitude towards project managers: they're seen as paper-pushers who get in the way of the real work people are trying to do. It was really refreshing to see their role from the opposite perspective, how they help direct and channel energies; more than that, we see that the best project managers can read a crowd, draw out the people who need encouragement, blunt the attacks of hostile coworkers, and make everyone feel more confident in themselves.  It's a great explanation of their abilities, and one that I hope I'll remember the next time I complain about a sprint retrospective.

The novel also introduces some original ideas, both technical and social. One of the latter kind that I found intriguing was the concept of a "web". As I understand it, it's sort of an orthogonal family to which one belongs: not the family you were born into, but the one to which you were assigned. It's sort of a cohort, like you might find in a small school: the members are all the same age, and were assigned together shortly after birth. It's more enduring than a friendship: you might fight with another member of your web, but there's a strong cultural pressure to repair any such damage quickly. Members of a web are meant to support one another, share their ambitions and fears, turn to one another for help. I think there's a lot to be said for this idea... in a way, it seems like a modern replacement for the sprawling family structures that supported people for most of history, before the rise of the nuclear family in the 20th century.

While the web is an important structure, it doesn't control social life, and at least in Jackal's case, she finds love outside of it. Her relationship with Snow may have been my single favorite aspect of this book. It's grounded and strong, while still being nuanced and surprising. They challenge each other, and complement one another, and support each other through the worst experiences. I feel like it's unusual to have a romantic relationship be this central to a character's story while not being at risk... it isn't a love story, or a heartbreak story, but Jackal's vital link with Snow is a key piece of her identity, giving her more ways to process her thoughts and feelings than she would have on her own. (They do drink way too much, though.)

Jackal's relationship with Snow is rock-solid, but with her parents is fraught. We see most of this in the connection with her mother Donatella, who may be the least sympathetic character in the book. Donatella is controlling and manipulative, but not very good at either aspect, and so often resorts to tantrums in an attempt to get what she wants. She seems to be much more distant with her father; I sort of got the impression that her parents were divorced, but don't remember the book ever explicitly saying so. She seems to have a better rapport with her father, but it's also less relevant to her life.

One thing I was a little curious about was exactly what happened with the elevator in Mirabile. I suspected that it wasn't what it had appeared: either there was a deliberate attempt on Jackal's life, which she inadvertently thwarted by getting blackout drunk in the bathroom; or else it was a crisis manufactured to put her in the position she ended up in. Given Jackal's background up to that point, it's hard to think of what enemies could possibly wish this upon her. It does have the advantage of having taken place off of Ko property, which could be a benefit for both internal and external foes: the former for better deniability, the latter for better access. She may have been targeted for her intrinsic value as a Hope, or (less likely) because of her involvement with project Garbo. Nothing comes of this by the end of the book, though, and I'm left tentatively assuming that it really was just an accident. Occam's Razor, I suppose... it's something that's extremely common in the real world, but we just aren't used to seeing in novels.

Of course, it's possible that there really was something more sinister behind the event, and that it's being saved up for a sequel. The book ends on a pretty satisfying note for a standalone novel, but there are definitely breadcrumbs left behind that could point the way towards a follow-up story. Steel Breeze seems to be a major and growing threat. The violent Solos are vividly drawn, but only Astar really enters into the story for long. And there's a subplot dealing with a guy who was summarily banished from Ko which didn't seem to go anywhere, but might hint at some larger and more ominous maneuverings around the development of Garbo and which could crop up again in the future.

All that said, to the best of my knowledge there won't be a sequel, and that's fine. While I've enjoyed this book, I'm also happy to let it be its own thing. Hey, I'm already waiting for a conclusion to the Steerswoman's Road, it's nice to be finished with a thing for once! It doesn't look like Kelley Eskridge has written any other novels, but in the meantime, I might check out some of her short fiction and essays.
Posted by Christopher Charles Horatio Xavier King III, Esq. at 6:41 PM