After far too long an absence, I’ve returned for my second Charles Stross book, Rule 34. It’s a semi-sequel to Halting State, set several years after the first book and set in the same world, but with a new story and mostly new characters. Like its predecessor, it has a vaguely annoying 2nd-person narration, but this is more than offset by its vibrant near-future science-fiction ideas and a greatly plotted story. 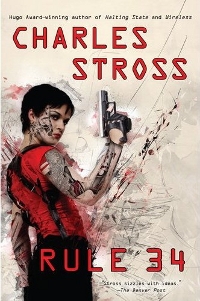 I have even less excuse for the second-person narration in this book. In Halting State it had the vague justification of being thematically appropriate, since much of the plot of that book dealt with video games, which are famously a medium of fiction told in the second person. There are no video games this time around, but still a lot of technology. As before, it mostly takes ideas that are here today or could conceivably be Kickstarted next year, and plays them out in entertaining but fully grounded ways.

It’s an interesting future that Stross has created. I wouldn’t exactly call it dystopic, but it is pessimistic. There’s no nuclear war or megavirus to take down mankind: just several other recessions following in the wake of the 2008 financial crisis, a global deflationary cycle, and the ongoing whittling away of civil liberties. People have come to accept the status quo, as they always do: each individual person in the novel is just trying to make their way through life and make things as good as they can.

There are a few specific things that Stross plays with here, in the same way that he played with public-key encryption and massively multiplayer online worlds in the last book. The first is maker culture. We aren’t yet living in the world of The Diamond Age, but are several steps further along that pathway. Home fabricator units are reasonably priced and good at making various things. The government has regulated the sale and distribution of schematics (to protect against things like weapon manufacture), along with extrusion material (to track who is using home units). Of course, this has created a black market precisely for people who want to make these sorts of things.

Fortunately, one of the few returning characters is Liz, the Scotland Yard detective who was probably my favorite protagonist in the first novel. As before, she has a fantastic perspective on law-enforcement: she’s very realistic, and accepts that they won’t be able to eliminate all crime, but at the same time feels a profound sense of duty to accomplish all that she can. As she understands it, her job is managing crime, not ending it: she constantly monitors the vast streams of data about all of the signs of illegal activity, and tries to determine what are the largely innocuous ills they can live with, and which are likely to spiral into more severe threats if left unchecked. The spread of rogue fabricators seems like an annoying sideshow early on, but it triggers her intuition, and eventually proves to have a strong connection to the rest of the story.

The second major idea of this story is artificial intelligence. Not so much the classic science-fiction idea of virtual human personalities; as one character quotes, “Asking if a computer can think is like asking if a submarine can swim”. For the most part, the question of whether machines can become like humans is irrelevant: they’re exceptionally good at performing certain cognitive tasks. In this book, those tasks mostly have to do with spam detection and generation. There’s an arms race, familiar to anyone who uses GMail, between white-hat programmers building better and smarter filters to detect and eliminate unwanted email, and black-hat spammers building better and smarter programs to generate new emails (and ads and synthesized voice calls and so on) to bypass those filters.

As in our own world, this arms race has outstripped the comprehension of the human programmers who started it. Machines are now better at judging whether a particular missive is machine-generated than a human is. It’s a weird, unsettling position to be in. It isn’t exactly the singularity (and one researcher laughs out loud when an investigator brings up the idea), but it is a point where people need to take their hands off of the steering wheel if they are to hope to keep up with their adversaries. The programs on both sides are now capable of rewriting themselves in response to incoming data, dynamically mutating in order to become more effective.

Of course, everything is run by machines now. Even the police rely upon computer systems to help them determine what crimes to investigate: there are just too many crimes for an individual cop to keep them all in their head at one time. And so, you gradually realize over the course of the novel, what we’re seeing isn’t so much a matter of individual cops squaring off against individual villains, but entire NETWORKS that are locked in a struggle for supremacy, with human beings as the agents they’re using.

And, the kicker is, it works. The massive surveillance system that has been built in all modern cities has effectively eliminated high-profile crimes. We’re told that Edinburgh has a single-digit annual murder count, which sure sounds like science fiction, but once again Charles Stross has anticipated reality: Rule 34 was published in 2011, when only 11 murders occurred; in 2013, there were only two. While it gets results, though, it’s extremely expensive: we see the enormous state apparatus required to achieve these results, which is extremely expensive, in terms of money, manpower, and  curtailed civil liberties. It’s something that I cringe at, but is also very believable, and is absolutely the path that our society is set on now. You can definitely see why people would be willing to pay for it through higher taxes and giving up freedoms that they don’t really care about anyways, and why it’s politically expedient to accelerate the transition towards the surveillance state. Once again, what’s impressive is that Stross is able to set this up without it feeling like a traditional dystopic cyberpunk novel, but rather like the logical continuation of the world we occupy today.

While the story focuses on this particular investigation, the occasional references to the broader geo-political situation are intriguing as well. From what I remember, these continue the trends that were already established in Halting State. America has become increasingly irrelevant; I genuinely enjoy the casual disdain most characters display towards this once-powerful empire, which is now primarily a source of schadenfreude. One of the best examples of that might be the completely offhand way in which one character remembers how embarrassed the US was when it had to announced that their drone program had blown up a motorcade which included the President… of the United States.

The EU holds relatively more power in this dynamic than they do today, but they’re still hindered by the sort of infighting that you would expect. Scotland, the site of both novels (and Stross’s home) is in an odd position: it’s been granted independence, not so much out of a groundswell of Scottish nationalism, but for obscure political reasons (to increase the UK’s representation at the EU); they have their own legislature, courts, and crime forces, but their foreign policy and national defense are still run out of Westminster. Likewise, much of the plot deals with a breakaway republic from Kyrgyzstan, but as we discover, it didn’t so much win independence as forcibly receive it, along with 90% of the parent company’s debt, as part of a complex and multi-layered scheme for fiscal solvency.

One quick note on characters - to the best of my recollection, Halting State had 3 narrators. There’s still a core of 3 here, covering a good range of perspectives: the cop (Liz), the crook (Toymaker), and the fall guy (Anwar). But there’s more variety here, and we get one or two chapters each from several other characters who are more peripheral to the plot: some victims who can shed light on events, and (eventually) some of the major players who started the wheels turning in the first place. It breaks the discipline of the narrative structure somewhat, but overall I liked the change… it was engaging to drop into some different heads and see the story from additional perspectives.

I’m still trying to untangle the final plot; there are a LOT of revelations in the last few chapters. In several cases I felt like I was running ahead of what Liz and company were uncovering, but I’m still a bit unclear on exactly what was going on with the AI. The conspirators behind Issyk-Kulistan created (or reprogrammed?) the AI, but did it become self-aware, changing its ultimate mission to a broader mandate to fight ALL crime, including the (relatively lesser) one being committed by its creators? Or, were there two separate AIs, a crime-fighting one and a crime-creating one? Given the final chapter, I’m leaning towards the former scenario, but I’ll probably need to re-read it or consult online resources to determine for certain.

END SPOILERS
Despite my minor frustrations with the narrative style, Rule 34 is a fantastic book. Like a lot of contemporary science fiction, it isn’t about imagining some far-off futuristic world, but about what might happen next year, or even next week. We’re living closer to the future than ever before: artificial intelligence isn’t some hypothetical possibility, it’s a significant part of our everyday life, and the cognitive leaps we need to accept to follow along with our science fiction are shorter than they’ve ever been before. Rule 34 gives us a great, twisty, multi-layered story that’s enjoyable on its own merits, in addition to being the perfect excuse to take a deeper look at the world our society is collectively rushing towards.
Posted by Christopher Charles Horatio Xavier King III, Esq. at 8:21 PM