I’d forgotten that I had previously started on Kill Shakespeare. I recently picked it back up again, this time in a wonderfully-bound volume collecting the entire arc along with some supplemental material. 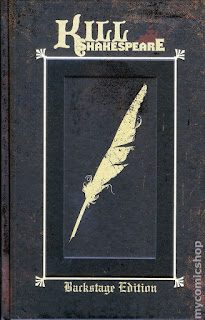 This is a really fun story, and quite infuriating at times. The authors have an unabashed love for Shakespeare and a ton of enthusiasm in constructing their story; however, there’s also a lot of messiness, things that most readers will blissfully overlook but that doom English Lit majors like me to periodically sigh in frustration.

One addition to this volume that wasn’t present in the earlier one I read was a set of annotations. After each issue, a professor will go through all of its references, pointing out which plays different dialogue was drawn from, what Shakespearean scenes inspired various moments in Kill Shakespeare, etc. Their writing is very game, but you can sometimes practically hear them rolling their eyes: “No, this dialogue isn’t correct: it should be ‘thou’ instead of ‘thee’.”

I remain slightly baffled at the intended audience for the book. My initial assumption had been that it would help modernize the dusty old stories and make them relatable for contemporary audiences. Perhaps it would be something that a middle-school reader could devour, gaining some basic understanding of a few major personalities and plots from the canon. That really isn’t the case, though. Kill Shakespeare takes a rather cavalier approach towards everything: not just Elizabethan language, but in its treatment of the source material. Some elements seem to be carried over fairly directly: Othello’s nobility and temper, Richard III’s scheming. Others are intentionally subverted: Juliet is reimagined as a brave leader of a rebellion. And other changes seem completely random: we learn late in the book that King Hamlet, rather than the kindly ruler depicted in his play, was actually a paranoid tyrant. Why the change? ¯\_(ツ)_/¯ It doesn’t seem to have any impact on the story of Kill Shakespeare, and doesn’t seem to be making any particular comment on the source material. Any middle-schooler who relies on this comic will probably be hurt more than helped.

And that’s totally okay! Comic books don’t need to be educational, they’re meant to be fun, and I think that if you can turn off the part of your brain that analyzes things for correctness, you’ll have a lot more fun with this story. It’s ultimately just mining Shakespeare for material, using it for inspiration but not bound by its constraints.

The art is exceptionally well-drawn, and every page looks gorgeous (or macabre, as the situation demands). It’s both cartoony and detailed, with bright colors and terrific layouts. I thought that the supernatural scenes were the best; in particular, the scenes with the ghost King Hamlet have some absolutely astonishing sword iconography that creates a tableau filled with menace and dread. 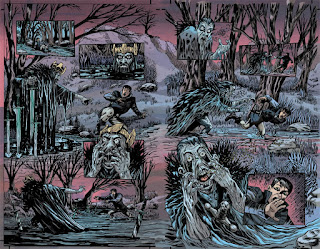 Once again, this is a comic book, and there are some conventions it hews to more closely than I would like. I shouldn’t complain about its goriness, considering how bloody source plays like Titus Andronicus and King Lear can be, but I personally had trouble with the bloody close-ups of mutilation and torture. It also predictably leers at the ample bosoms of its female characters, notably Lady Macbeth. Again, nothing out of the ordinary here, but something that made me occasionally roll my eyes and mutter “Oh, come ON!”

Lady Macbeth, and the Macbeths in general, fall on the far extreme of modifications from the original play to their portrayal here. Of course, one recurring question in studying and putting on the Scottish play is what level of responsibility and guilt Macbeth has for the actions he takes: has he been manipulated by supernatural forces, or do they merely give affirmation to desires he already held? In the play, Lady Macbeth initially prods her husband towards greater ambition, but ends up mad, unable to follow him all the way towards his final bloody moments. In KS, though, Lady Macbeth isn’t a co-conspirator or a power behind the throne: she’s out for herself, seeking to achieve her own power. Oh, and she’s also now one of the Three Weird Sisters.

Intellectually, I actually kind of like those changes - it gives women more agency than they typically have in Shakespeare. But it’s kind of hard to focus on that aspect of it when she’s SUCH a femme fatale, sleeping with every man who can aid her, and manipulating and backstabbing all of them.

I was kind of surprised when Lady Macbeth kills off Macbeth early on. How does she do it? By bricking him up behind a wall, like in The Cask of Amontillado. Why? Because screw you, that’s why! There are zero other references to Poe in the rest of the series, and very few references to non-Shakespearean literature, so it’s not like it’s part of a theme of mixing up Shakespeare with later works. There’s also no shortage of unusual and creative deaths within Shakespeare that they could have drawn upon for this. It just feels kind of weird and out of place. But, again, this is just me as an english lit nerd speaking; I instinctively demand a level of formal discipline to my stories that’s probably not very realistic nor fun.

Once Macbeth is out of the way, Lady Macbeth gains control of the Black Guard, before Richard in turn eventually manipulates it away from her, and… it kind of doesn’t seem to matter? There are frequent references to the Black Guard throughout the story, and everyone seems intimidated by its power; even Richard, who appears to rule with an iron fist, covets the strength of this elite unit. When they finally are deployed, though, it feels a bit anti-climactic. They’re scary-looking dudes; but Richard’s forces alone already felt like more than a match for the rabble of barely-trained peasants opposing them. There are some interesting beats in the internal storyline, notably the commanders in the Guard who yearn for action and glory, but it never had the kind of payoff I expected.

For all of my periodic frustrations with the story, the core of it is a really cool idea. Shakespeare is a real person, and also, within the context of his stories, a god. He’s the one who created all of these characters, and shaped them by putting words in their mouths; however, once he did so, they took on a life of their own. He’s frequently referred to as a god, and he holds some but not all of the attributes we associate with that. He is a creator, and can reshape reality according to his will; but he’s also mortal, flawed, and unsure of himself.

The heart of the crisis is that Shakespeare feels guilt for the harm he has caused: his characters are real to him, and he’s the one who created the villains, so he’s ultimately to blame for their actions. He withdraws from the world, causing even more suffering as his creations run amok.

Given the rest of this comic book, I’m not sure how deeply I’m supposed to read into this. Is Shakespeare an allegory for the creators themselves? Is he a Tolkienian sub-creator; or is he God, and his characters responsible for their own sub-creation? Are we meant to remember that Shakespeare himself is a creation of this book’s authors? Are they, themselves, gods? Interesting questions. If this was a book by Gaiman or Moore, I’d be convinced there was an answer and spend a lot of time trying to suss it out. As it stands, I think it’s just entertainment, and won’t lose too much sleep over it.

Another element which I think it really interesting to think about, but may or may not be a deliberate theme, is that of fate versus choice. This, again, is one of those things that 9th graders across the country are asked to grapple with when they write five-paragraph essays on the topic of Macbeth. The different characters this story focuses on, though, represent very different aspects of this continuum. Hamlet is notoriously obsessed with his choices, a fact that was at the heart of the awesome To Be Or Not To Be choose-your-own-adventure book. That legacy from his play carries through to the action here, as he grapples with the incomplete information he’s gleaned about his world and weighs the advantages and risks of different actions he could take.

On another extreme, the story of Romeo and Juliet is pretty notoriously fate-oriented; the plot tends to advance through coincidences and things that the characters don’t have much direct control over. Juliet in Kill Shakespeare has more agency than her namesake, but she also lacks Hamlet’s introspection. She’s chosen this role for herself, and doesn’t second-guess it. In fact, that’s true of pretty most characters here. Othello is the other one I can think of who seems to genuinely reflect and reconsider his actions and choices.

The book is nicely ambiguous when it comes to Shakespeare’s own position in all this. Did he grant free will to his subjects? Does he even have free will himself? He’s a god, but seems more constrained by his powers than any of his subjects. There’s more here than the book explores, but it’s something fun to chew on.

I realize this write-up was mostly complaints, but I did enjoy this story more than not. Between the gorgeous artwork and the fun representations of some of my favorite characters, there’s a lot to recommend within here. I still personally prefer Ryan North’s epic To Be or Not To Be, which does a lot more to engage with the source material and provide interesting literary/social commentary on it. I’m REALLY looking forward to Romeo and/or Juliet, the upcoming sequel, which will similarly illuminate the other major character featured in Kill Shakespeare. But, for someone who wants a bloody, sexy good time, Kill Shakespeare has a lot to recommend itself.
Posted by Christopher Charles Horatio Xavier King III, Esq. at 10:17 PM