This is a quick check-in on my progress through Pillars of Eternity. I recently completed Act 2, and feel like I’ve gotten a better feel for the overall story and design of the game. Most of my reactions are covered in this fairly spoiler-y album of screenshots, but there are a few additional things that didn’t fit in there very well and so are covered below. 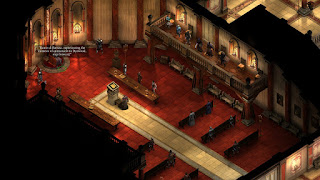 They really aren’t afraid of grasping the “Spiritual Successor to Baldur’s Gate” monicker with both hands, and the game is filled with very on-the-nose ties to the classic game, often going beyond mere tributes to straight-up repetition. One of the most obvious is the “You must gather your party before venturing forth” message being written and spoken whenever you try to leave an area while your party is scattered. That’s kind of fun, and also an odd choice, since over the years I’ve heard a lot more complaints than praise for that line. It is one of the most iconic elements of BG, though. The audio nods continue, down to a particularly boisterous drunken laugh that you hear in pubs in both games. It’s a distinctive sound, and not necessarily a pleasant one, but instantly reminds you of similar social experiences from the prior game.

The (excellent!) soundtrack is also quite evocative, though not just of the BG games. The Caed Nua theme sounds a lot like the main Hobbit theme from Lord of the Rings. Which isn't a bad thing! I do love that music, and it fits the fantasy setting very well. 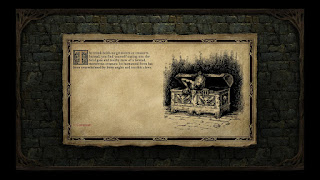 Most of the monster manual also seems to have been lifted from the earlier game, with monsters haphazardly renamed but recognizably the same. The first creatures you encounter, Xaurips, are a clear replacement for the goblins or kobolds of BG. Vithracks are exactly the same as Ithilids (Mindflayers). Some of the substitutions are just silly, as in Fampyrs replacing Vampires. These seemingly-pointless updates make the remaining races feel stranger and more arbitrary: how come they replaced goblins and vampires, but left ogres the same?

That’s all just nitpicking for fun, though. The core game has been great, and I continue to appreciate the modernized engine that retains old tactical challenges while reducing pointless frustrations.

The voice acting has been interesting. Most of the "isometric RPG renaissance" games fall into the category of "semi-voiced", but what that means has varied from game to game. Back in Baldur's Gate 1 and 2, whenever an NPC spoke, you would usually hear an actor speak the first line or two, and then would read the entire dialogue in text. Siege of Dragonspear followed this design, but with a bigger ratio of voiced to non-voiced lines. Wasteland 2 (Director's Cut) was largely voiced, which was nice in parts but felt grating in many places. 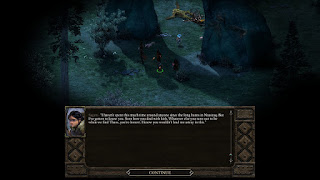 Pillars of Eternity is a little different: instead of speaking the first part of a chunk of dialogue, each individual "node" is either fully-voiced or not voiced at all. Minor NPCs usually don't get any voice. Major NPCs will usually be voiced for their main critical-path dialogue, but non-voiced for branching and reactive dialogue (which fewer people will see). Unlike most dialogue in Baldur's Gate or Wasteland, dialogue in PoE frequently includes non-verbal descriptions, like "he says angrily" or "she pauses to brush the cobwebs from her face" or "Eder lets out a loud snort". None of those are voiced, even if they're describing non-speech sounds.

On the whole, it works pretty well. I still feel like it would be better to either go fully-voiced or cut way back, but I've been liking the voice acting in PoE better than in WL2 so far. The actors on the whole seem better, they rarely hit the wrong emphases, and I almost never find myself skipping past them (one major exception: Lady Webb, who has a nice tone but speaks. Far. Too. Slowly. To. Tolerate.)

Uh, I guess that's it for now. No story spoilers in here yet (other than what's in the album), I'll probably hit those in a final write-up after I finish the game.
Posted by Christopher Charles Horatio Xavier King III, Esq. at 6:58 PM