This is just a short (hopefully!) post about my initial experiences with Dreamfall Chapters. It's an episodic adventure game that I started playing recently and am enjoying so far. 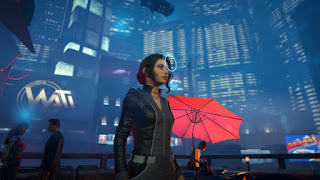 I actually acquired the game a while ago, through somewhat surprising means. A kind stranger on the Internet, who had played and enjoyed The Caldecott Caper, noticed that the game was on my Steam Wishlist and gifted it to me. I sent him/her a profuse note of thanks - it was extremely generous of them, but I also felt a little guilty, since I hadn't wanted to give even the impression of accepting compensation for the mod. I've since scrubbed the remainder of my Wishlist, lest others get the same idea. Still, it was a very humbling experience (among other things, my benefactor is from France, which gave me a better idea of the global popularity of the Caper), and makes the game even more special to me.

All that said, it has been languishing in my queue for a few months, while I played Wasteland 2 and Siege of Dragonspear and Pillars of Eternity. At last, my schedule freed up enough for me to start playing it. I've been looking forward to it for a while: if memory serves, I initially found it while doing a Stream tag search for "Cyberpunk + Female Protagonist", and the great reviews and screenshots were enough to get me excited for it.

As I've learned, this is actually the latest entry in a long-running series of games called, appropriately enough, The Longest Journey. First released in 1999, it has a detailed backstory, which is efficiently and compellingly conveyed via an optional summary within Dreamfall. While many of the characters and plots are continuations from the earlier games, I haven't felt like I've missed much by jumping directly into the current game. 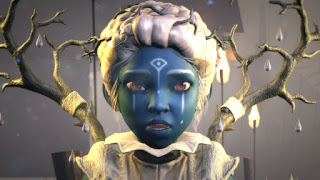 Like practically every other modern adventure game that I'm aware of, Dreamfall Chapters is released episodically. Each release is a "book", containing several "chapters". Different chapters typically alternate between different playable characters and plot threads, although there's a meta-story tying everything together. It looks like I perfectly timed my start of the game, as Book 5 (the last one) was just released on Friday. I'm not a big fan of waiting for months to find out what happens next in a story, so I'm really glad that I'll be able to play straight through this one.

So far, I've finished the first book, which includes a short Prologue, a shortish Chapter One, a very long (and great!) Chapter Two, and a couple of interstitial segments. I've been struck by how different the chapters are: not just in style and theme, which I was already expecting given the background of the game, but in gameplay as well. It's all an adventure game, and everything uses the same interface, but each sequence has a different feel to its puzzles. 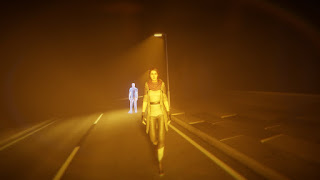 The prologue's puzzles fairly straightforward: you're in a small space, with just a couple of available interactables, and need to figure out which abilities to use to proceed. It was fine, maybe a bit simplistic but that might be intentional to ease people into the game. (I've seen in the release notes to the latest version that they've revamped many of these puzzles, so they may be different now.) The first chapter, by contrast, focuses more on traditional item-based puzzles. You need to explore your environment, locate objects, then combine and use those objects in order to proceed. Those puzzles were decently logical: not immediately obvious, but they almost always made sense in retrospect, unlike the infamous latter-day Sierra puzzles.

The second chapter, though, has been by far my favorite so far. Part of this is because I enjoy Zoe more than Kian; not that he's a bad character, but we get to see a lot more of Zoe's interior thoughts and her relationships. This segment is a lot more open-ended than the more focused Chapter One, with a ton of exploration and many different people to meet. The puzzles change again in this sequence: the map is now big enough that you can make interesting challenges out of finding things, and figuring out who to talk to. There are very few items in this sequence, but some original mechanics to using them.

Beyond the story itself, though, the setting is just jaw-droppingly great. Propast is a gorgeous cyberpunk-infused district, reminiscent of Blade Runner and other seminal works of the genre. There were quite a few areas that reminded me of Shadowrun: Hong Kong and Dead Man's Switch, except this time around I was playing with a third-person camera rather than a locked isometric view. It looks fantastic, and is a wonderful space to immerse yourself. It feels alive, too, which is something that a lot of video game cities get wrong. There are tons of people walking around, or whispering in corners, or slumped over a dream machine, or protesting the Eye. It took me a while to realize that this was all atmosphere - not every person has a hidden quest associated with them - but once I could relax and enjoy their presence, it helped add to the sensation of Zoe's gradual and deliberate rejoining of her community. 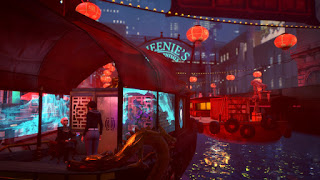 Oddly enough, I found myself thinking of Bioshock Infinite during this chapter. One of my biggest and least sensical criticisms of that game was that it created this amazingly evocative city, and then made us play a dumb shooter game inside of it instead of just letting us explore and immerse ourselves in it. Well, Dreamfall is the game where we get to explore the cool city, and I'm glad for it.

Coming on the heels of my long-running sequence of RPG games, it's also been interesting to contrast an adventure game like Dreamfall with those games. There are certain narrative elements that are common to both games, but the way they're used is drastically different. I'm thinking primarily of choice and, to a lesser degree, consequences. 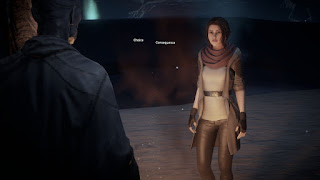 Each game is different, of course, but I feel like the Platonic ideal of an RPG is a game in which you project yourself onto the protagonist. The game presents you with options, you select the one that most appeals to you (or least repels you), and then the story shifts in that direction. In most franchises you start as a bit of a blank slate: a prisoner from a far land, or the sole survivor of a giant explosion, or the one explorer to emerge from an underground bunker. You have little or no baggage, and have nearly total freedom within the parameters laid out by the developer.

In contrast, adventure games always (I can't think of any non-text-based exceptions) feature a predefined protagonist, generally with a detailed appearance, backstory, and set of skills. You're playing as them, but generally won't identify with them to the same extent as you would an RPG protagonist. Your role is a bit closer to that of a director or a screenwriter: you're steering characters in a certain direction in order to tell a story, not directly experiencing the story yourself. 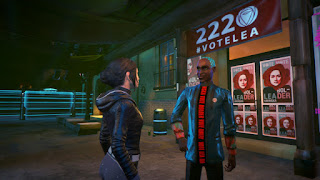 And yet, many of the most emotionally affecting experiences I've had in the last couple of years have come from adventure games with strongly defined protagonists. I'm thinking now of Lee from The Walking Dead. He's always black, he's always a former college professor and convicted felon, he always adopts Clementine. The choices the game gives you are comparatively narrow, generally more about how you feel about your situation or relate to other characters. And yet, those smaller choices end up touching more deeply. When cutting Clem's hair or walking Duck through the woods, I felt more connected to them than, say, I felt to my sibling in Dragon Age 2, even though I'd had a more significant impact on my sibling's appearance and situation in life.

The main reason I'm thinking of all this now is because of Reza. Again, I haven't played the earlier games, but my understanding is that Zoe previously went searching for Reza and in doing so helped unravel the Dream Machine plot. Now that he's free and she's awake, they are reunited and living together. Which is great and all, except I, personally, as a player, don't particularly like Reza.

Don't get me wrong: I think he's a good character, and he's pretty objectively good for Zoe. He's been supportive of her, giving her love and stability without hindering her independence at her own job and political volunteering. He makes his preferences known, but has a laid-back and easy sense of compromise. 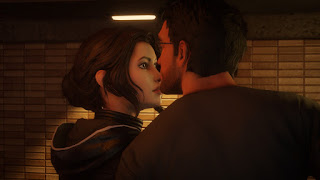 And I threw it all away! I think I was a little resentful of being "forced into" a relationship (which, again, makes a ton of sense in the context of the game itself). So, at the end, I deliberately chose to be confrontational with him, calling him out on being overly protective and then chiding him for his patronizing tone. He turned cold. The game clearly warned "Ignoring Reza will hurt your relationship." I wandered over to the living room and turned on the television. He stiffly announced that he was going out for the night and that I could help myself to his paella.

And I felt so bad! I'm infamously fond of video game romances. For me, though, that tends to mean something more like ordering off an a la carte menu. You examine your options, maybe try a couple, then pick the one you want and move forward. In Dreamfall, though, you have to do the work. This isn't the heady early days of passion and romance. This is a relationship that's been built and rebuilt over a year, that requires work as well as pleasure. It's a situation that most people will experience far more often than wooing. It's more realistic, less heightened, and ends up being more powerful because of it.

So, yeah. I felt bad afterwards, but hey, that's the choice that I made, so now I need to live with the consequences. I'm curious to see what those end up being!

Whoops! This turned out to be longer than I expected. It turns out that I have thoughts and feelings about video games, who could have predicted that?

As usual, I've assembled an album of screenshots. These cover Book One of Dreamfall Chapters. I'll probably make one more post after I finish the rest of the game!
Posted by Christopher Charles Horatio Xavier King III, Esq. at 8:46 PM