The Humble Narrative Bundle continues to play dividends. The latest entry: 80 Days, a fantastic globe-trotting adventure game based on Jules Vernes’ Around the World in Eighty Days and set in a steampunk version of the 19th century. 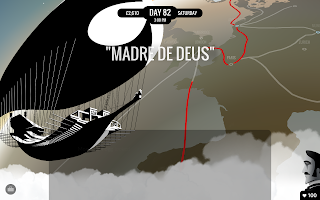 I’d vaguely heard about the game shortly after it came out for mobile platforms a couple of years ago. It has since been ported to Steam, and looks gorgeous. I’m pretty sure that they use vector graphics for the artwork, and the fantastical airships and bathyscapes and jungles and pyramids and bridges are delightful on a huge monitor. It hits that sweet spot of indie game development, with great-looking graphics that don’t require a AAA game engine: each component can be constructed individually, then assembled together in different combinations for a strong impact.

The game is written in Ink; I think this is the first Ink game I’ve played, and I’m now kind of tempted to check it out for myself. This decade has seen an explosion in platforms for creating narrative-rich games, from Failbetter Games’ StoryNexus to Twine and Inklewriter and ChoiceScript, as well as classic visual-novel-style platforms like Ren'Py. It was Christine Love’s Digital: A Love Story that first made me think about returning to game creation, and playing things like 80 Days makes me even more enthusiastic about building something. 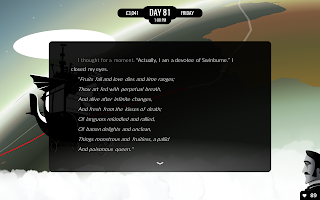 80 Days is very text-driven, in a very good way. There are a ridiculous number of cities in the world, and each one has its own stories, to say nothing of all the various encounters you’ll have on various railroads and zeppelins and submarines and such. The game reminded me of the free game Choice of the Dragon, which I absolutely loved and still need to finish; as with that game, I was astonished as I gradually realized the scope of content available, and the surprising long-running narrative threads, where earlier actions or discoveries would prove to have ramifications down the road. 80 Days also puts me somewhat in mind of the old Where In The World Is Carmen Sandiego games. Not so much for gameplay - Carmen Sandiago was more about gathering clues whereas 80 Days is more about constant forward progress - but both games feel rather similar. They see you exploring one exotic locale after another, learning something about the character of different cities, in a relatively friendly environment.

I’ve come to realize that many of these narrative-heavy text-based indie games that I love are built upon strong principles of resource management. In 80 Days, the three primary resources are time, money, and Fogg's cheer. You have, appropriately enough, 80 days to complete your circumnavigation, and this is the most important resource to manage: you can only win the game if you finish it within that deadline. Time only advances forward, and you can never bring it back (well, except for when you cross the International Date Line!). In contrast, money can go both up and down. You’ll primarily spend money on routes to new destinations; generally (but not necessarily), more money will mean quicker passage to a further destination. You can also spend money on items that can help your journey. You’ll primarily acquire more money by visiting banks and withdrawing from Fogg’s account, at the cost of several days of time; you can also earn money by trading items, and sometimes by working at the hotel or making certain options within stories. Finally, in your role as valet, you must keep Fogg happy. His happiness can go down or up, although it is capped at 0 and 100 respectively. This is less crucial than the other two resources, but you should still keep an eye on it.

Once I grokked that setup, I felt very comfortable navigating the game. It reminds me of quite a few games, most immediately Below, Chris Gardiner’s dungeon-delving card game, which used somewhat similar resources (Spirit, Sails of the Sword-Kings, and Secrets/Gear/Treasure) that were interrelated and each had different uses.

On to my own journey! I’m marking this with mini spoilers out of an abundance of caution, but it’s probably OK to read even if you plan to play, since there are so many different route combinations that you’re unlikely to have the same experience as me.

I learned of several potential routes during our initial trip to Paris, and debated whether to travel overland through Russia or take a trip through the recently-opened Suez Canal. I ended up traveling north, entering St. Petersburg through Scandinavia, then heading to Moscow and hopping on the Trans-Siberian Railroad. Along the way, I learned that the governor of Omsk enjoyed hearing travelers’ tales, and I managed to acquire travel papers from him during our visit.

Those papers allowed me to enter Vladivostock, which otherwise was closed to non-military personnel. From here I took a ship to Yokohama, and around this time my plan began to fall apart. First of all, I was running low on funds for the long trip to San Francisco, and needed to wait a week to withdraw them, then nearly another week before the next ship left. Worse, we were blown off course during a storm, and the captain decided to reroute us south to Honolulu. I was irate - I had specifically selected SF over the cheaper Honolulu route in the first place - and mounted a mutiny to try and seize control of the vessel. It was a close match, but without the support of the Chinese crewmen we failed and were stuck on the island. This led to still more waiting as I scrambled for more funds and yet another berth to San Francisco.

We were so far behind by this point that I despaired of making it in time. We took the transcontinental railroad east, but it wasn’t yet complete, so we exited in Burlington and then took a steamboat down the Mississippi to New Orleans. Desperate to make up lost time, I urged the captain to push the boat harder; this resulted in the boiler exploding, costing us even more precious days.

I was sure by this point that we were doomed. I felt some brief hope once I realized that the superfast aerial railroad could take me from New Orleans up to Washington quickly. Better yet, on route I managed to knock out Sullivan the boxer, acquiring a handsome prize purse and saving us time from the bank in Washington. It wasn’t quite enough time - we departed on day 79 on another airship, headed for Ponta Delgada.

In the most painful moment of all, I discovered en route that there was an option to bribe the aviator to head directly for London. Doing so would cost 4,000 lbs. I had merely 3,200. I nearly cried as we continued east, SO CLOSE to our destination!

We made it back to London on day 82. I had technically lost, but the game did a good job at softening the blow, immediately encouraging another trip. And so, the next day, I did!

To more quickly summarize: the next time I took a more southerly route. My goal had been to pass through the Suez canal. However, while on the way, a fellow passenger persuaded me to detour into the Ottoman Empire, saying that if I helped him spy on one of his businesses, he would personally fly me to India in his private airship. I was skeptical, and thought I messed up the side-quest, but eventually proved successful.

After that initial triumph, though, I ran into a series of unfortunate events. A railroad across northern India proved to be incomplete, forcing an agonizingly slow journey on a donkey cart down to the coast. A zeppelin took us swiftly towards Singapore, before being shot down and submerged during a mutiny, nearly killing myself, Fogg, and everyone on board, and bringing us to a complete halt. We recovered and continued to Manila, where Fogg contracted Spanish flu, forcing us to recuperate on Honolulu for nearly a week. From there I headed to Panama, hoping to cross the isthmus; no route east presented itself, however, so we had to make our way north through Mexico instead.

With all that, though, I still made good time. By now I had figured out the rhythms and techniques of the game, and arrived in New Orleans with well over a week remaining. This time around I took the train all the way up to New York; I lost the fight against Sullivan and didn’t have the fare for the direct route to London, but a luggageless jaunt through Reykjavik still brought us back to England with a whole five days to spare. Huzzah! The game ended with a cheeky suggestion of embarking on yet another Vernian adventure.

This game was a lot of fun. The mechanics are great, a winsome mixture of lightness and complexity. I can see why it would do so well as a mobile game: each individual segment is small and manageable, so you can play it in gaps, but there’s still a compelling overall goal that would bring people coming back.

On top of the gameplay, I particularly enjoyed the light roleplaying opportunities. Your character has a briefly-sketched background: You are Passepourt, a valet from Paris who has recently entered the employ of Mr. Phileas Fogg, an English gentleman. However, you have many choices to express how you feel about this role. Do you have a servant’s heart, energized by caring for your master? Are you resentful towards him? Do you find his quest ridiculous? Are you fussy, or fastidious, or phlegmatic? 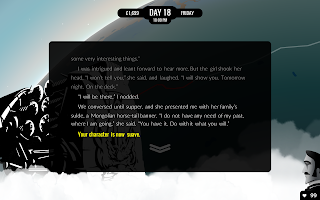 Even more than the Fogg - Passepourt relationship, I loved the brief encounters you can have with other NPCs. You’ll often meet young ladies, gentlemen, couples, and others while en route or in a city. From a Mongolian princess aboard the Trans-Siberian Express to a New Orleans reveler masked as Death, you have ample opportunities to interact with interesting people, perhaps flirting or bonding or boasting. Many of these have some minor gameplay advantage - you may learn of a new route or perhaps acquire a trinket - but they’re primarily compelling in their own right, as significant chapters in this book you are writing.

Like I said above, there is a TON of content in this game, and it’s virtually all contingent. I haven’t even BEEN to Africa or Australia or South America, which each have their own routes and stories just waiting to be told. Even if you were to follow the same route again, the random vagaries of time and branching plot lines would help you from having yet another cookie-cutter experience. I’ve only played this twice, and I’m fairly certain there are a few more good experiences to get out of it. 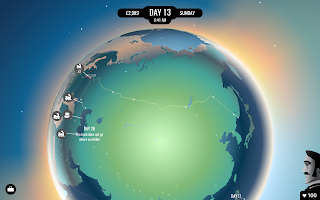 Having only played it twice, I’m not an expert, but here are a few gameplay-related thoughts from me:

I think that’s it! As usual I’ve assembled an album of screenshots, this one at a very svelte and reasonable 24 pictures, covering the first of my two voyages. 80 Days was an inspiring blast, making me eager to see what they come up with next and also reminding me that it is possible to create compelling games on relatively simple graphical engines.
Posted by Christopher Charles Horatio Xavier King III, Esq. at 8:19 PM