Phew! I'm now more than half-way through the Humble Narrative Bundle, and still haven't started either of the two most-famous games from it (Her Story and Broken Age).

I hadn't heard of Read Only Memories prior to picking up the Bundle, but the capsule description sounded right up my alley: a retro-style adventure game set in a cyberpunk San Francisco?! Sign me up! 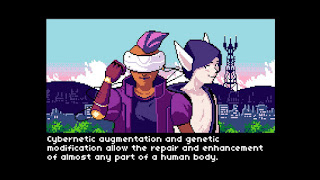 It was a bit of a rough start at first - it isn't just "retro" in the sense of "evoking classic adventure games", but uses super-old-school, 16-bit, heavily-pixellated graphics. I had to take frequent breaks while playing, and it took me a while to get into the story. Once it got going, though, I loved it, and it ended up as not just just a a fun adventure game but a really unique and memorable twist on noir storytelling.

Cyberpunk San Francisco! It's strongly grounded in the geography, and I got irrationally happy at seeing Sutro Tower on the horizon, or navigating the diagonal intersections at Market and 15th Street. The game is set in 2065, and this feels like a believable update of the city. (In contrast to, say, Shadowrun's San Francisco, which is a radical departure from the city's history.) Then as now, SF is a tech center that's at the forefront of new technology, and also a hotbed of activism and a refuge for marginalized groups. 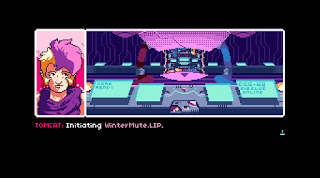 Speaking of which, the game also has a fantastically diverse cast, possibly the most diverse of any video game I've played. This includes traditionally sidelined people (racial minorities, gays and lesbians), people on the margins of society today (transgender people, gender-non-conforming, and otherkin), as well as entirely new futuristic minorities (augmented humans, sapient machines). Representations are generally positive, though it avoids Saturday-morning-special saccharine messaging. Some people have chips on their shoulders and don't have much patience for being your token friend.

The player character also can be represented in a lot of different ways. Besides the traditional naming, you can also pick your own pronouns (as in he/him/his, they/them/their, ze/zir, etc.). There are a lot of role-playing opportunities within the game itself; there don't seem to be any romances, but there are a couple of subtle chances for you to expect a gender preference (or disinterest). 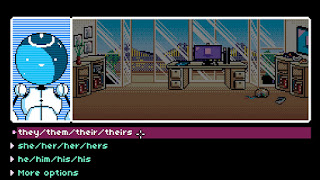 I'm sure that some of these mechanics will be seen as pandering, but it's actually tied in very well with the themes of the game as a whole. A lot of the debates taking place in society today have to do with people claiming their own identities and being recognized for who they are. ROM brings that further into the future, in the great tradition of science fiction, exploring contemporary ideas in a fictional setting. I've thought for a while that cyberpunk is a very fertile genre for taking on these sorts of issues: so much of cyberpunk is built on the idea of body modification, reshaping humanity, shifting identity and questioning how much of our personhood is intrinsic versus selected. It doesn't take much imagination to apply those themes to the debates we're having today. 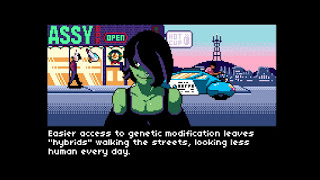 The backstory is cool, too... as far as I know, this game is a one-off without any other attached fiction, but it seems very well thought-out and feasible, bringing us from the present to a "traditional" cyberpunk future through an original timeline. California's initiative process continued to draw off more and more revenues from the state until it was forced to shove more and more services on to local communities (which has already started happening with Brown's recent changes to redevelopment agencies and incarceration). Cities, in turn, were unable to provide basic services, so they privatized core responsibilities like fire and police protection.

In some wealthier cities like San Francisco this has actually worked out decently well: the corporations want to maintain good PR, and see opportunities to increase profit in other divisions by effectively managing public-facing services. Smaller cities and poorer areas like Los Angeles have not fared as well, and have basically devolved into outright gang warfare, with the private security corps just a better-armed gang among the rest.

Anyways - the backstory isn't quite as thoroughly developed as, say, Shadowrun, but it arguably makes more sense, and goes above and beyond what is '"needed" by the game.

The plot itself has a very noir structure, reminding me of Chinatown as much as Blade Runner. You are an investigative journalist, and much of the game is spent chasing down leads, interviewing people, gathering clues and trying to piece together a mystery. It isn't just a whodunit, of course, and like all the best noirs there's a gap between the specific people you may be able to bring to justice and the enormously powerful institutions that control the law and cannot be destroyed. 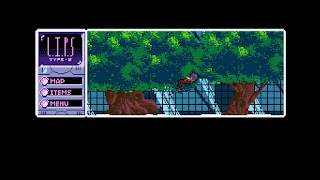 The music does a great job at supporting the story. It's almost all done in a retro 16-bit style (except for the fantastic closing credits song), but runs the gamut from plinky cheerful music to ominous rumblings to terrifying chase music to dramatic mood music.


There's good variety in the gameplay as well. The majority of the game is a traditional point-and-click adventure game, with simple inventory management and dialogue trees, but there are a couple of arcade mini-games scattered within it. I was actually reminded of Manhunter 2, another point-and-click adventure game set in a futuristic San Francisco, although ROM's mini-games are a lot more fun and less frustrating. The time-based ones aren't too punishing, and the turn-based ones have good logical components to them that are fair and fun to solve. 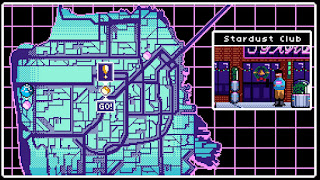 As mentioned above, I had a hard time with the graphics. This is mostly just a personal preference thing, so if you enjoy that style you'll probably have a good time with it. It became a lot more bearable to me after I stopped playing in fullscreen; the smaller window makes the pixels smaller and easier to deal with.

Also just a purely style thing, but there were some deliberately cutesy things that rubbed me the wrong way. I liked Turing's dialogue and story, but his animations and facial expressions felt grating. The game also does that annoying "speech" thing with warbling 16-bit sounds, which is sometimes funny in small doses but gets really aggravating over a long time. Fortunately, you can click to fast-forward dialogue (instead of printing out one character at a time, it will jump to show the full segment), and this typically disables the "talking" sound. 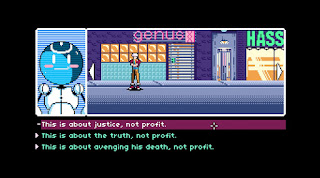 The interface can sometimes feel a little clunky. It's sometimes hard to tell when an item is highlighted, especially when returning from another interaction. Moving between multiple areas with left/right arrows can be fiddly. You can easily select inventory items by accident or click on the wrong icon. Fortunately, this stuff never has negative repercussions, but  still could be annoying.


The story gets off to a very slow start. I didn't really feel engaged by it until about midway through Chapter 3 (out of 6). The scene-setting and character development is good, but the stakes felt really low for a long time. Fortunately, it makes up for the slow start with steadily accelerating action up until the climax.

This was a blast! While I've enjoyed playing the modern choice-and-consequence-focused adventure games, it's been a long time since I've played a traditional point-and-click adventure game. Read Only Memories reminds me of something like Zak McKracken, with a fun mix of mystery storyline and humorous interactions, but with the addition of contemporary, relevant themes. I'm sure this isn't for everyone, but I had a great time reuniting my past love of adventure games with a futuristic look at the future of our culture.

As usual, here's a li'l album of screenshots taken from the game. It is filled with spoilers!
Posted by Christopher Charles Horatio Xavier King III, Esq. at 2:36 PM