With Which Witch Wish?

Thanks again to Andrew for yet another fantastic birthday present! I'm pretty sure a majority of my gaming hours over the course of a year are spent on the often-lengthy RPGs he gives me. The latest entry is The Witcher 3: Wild Hunt. 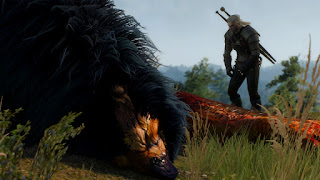 I've been meaning to try The Witcher for a while, but my only serious attempt came to an early end when a quest-breaking bug soured me on the original entry in the series after about 6 hours of progress. I'd been meaning to go back and retry the series, but based on Andrew's guidance decided to press ahead and jump straight into the third entry. As is true for almost all franchises, they do a good job at catching players up on prior events, so I haven't felt too lost; I think I'm also benefiting from streamlined game systems, to say nothing of the vastly superior graphics.

I'm still very early in - I completed a total clear of the initial area, including all optional content, and have just recently gained access to the main open-world portion of the game. I can tell that this will be a very long game to complete, so I figured I'd write up some initial impressions. I imagine that many of these will shift or reverse by the end of the game.

Environment design is amazing. It's been too long since I've played Inquisition, so I'm not sure how each compares to the other, but the terrain looks incredible, beautiful and varied. Environmental effects in particular are nice; I'll never get tired of looking at the incredible sunsets. Unlike Dragon Age, The Witcher also has a full day/night cycle, leading to interesting lighting that subtly shifts throughout the day. In an improvement over The Elder Scrolls, they also regularly shift the time of the day to set the right mood for cut scenes - for example, if you clear out a ghoul-infested village during a rainstorm at 3:30AM, then the time will jump forward to 9AM as you see all of the happy and relieved villagers arrive to take grateful possession of their abodes. 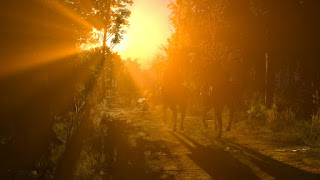 Character design is also fantastic. Geralt himself isn't customizable at all, but the NPCs you meet all look like realistic medieval peasant stock: missing teeth, squinting, hunched over, filled with blemishes, sometimes fat or muscular or sickly-looking. I love it! 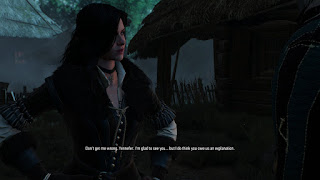 The world is full of interesting things. It's hard to avoid the comparisons with Dragon Age Inquisition, with both featuring large zones of largely unstructured content. On the whole, I think DAI's high-end content is better, but TW3's low-end content is better: no collecting shards or ocularums, instead each point of interest on the map has its own unique, small-but-sufficient, self-contained objectives. 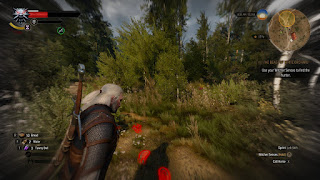 Along the same lines, Witcher Senses are a cool and inventive game mode. I enjoy these segments because they help me think of Geralt as not just a killer, but a talented hunter, almost a detective.

Crafting. I haven't done a whole lot yet. I do really appreciate that, after you craft consumables for the first time, you can automatically replenish them whenever you rest; that gives a much better incentive to invest in crafting instead of hoarding supplies. But, as with much in the game, the range of options feels a little overwhelming, with literally dozens and dozens of recipes to choose from.

Character builds. I like the flexibility of being able to slot different abilities and having multiple ways of earning skill points. But I'm not a fan of the Elder Scrolls-esque übermensch approach that encourages you to be a generalist (melee fighter AND ranged fighter AND caster). Again, I miss parties.

Inventory management. My patience for encumbrances and sorting through pages of indistinguishable gear grows rapidly thinner. TW3 isn't much worse than its contemporaries in this area, but I will wholeheartedly embrace any franchise that lets me focus on playing a game instead of sorting through trash.

Dialogue options. Andrew helped me put this in perspective: Geralt is an asshole, and you're mostly just choosing between varying tones of assholery. After coming off such a solid run of narrative-heavy games, though, it's a little dispiriting to be in a role-playing game that gives few choices for playing a role.

Combat. It isn't bad, I'm just not very good at it (though much better than when I first started). I've never been a huge fan of action-RPGs. TW3 does have better combat than, say, The Elder Scrolls, in that it requires actual strategy instead of gear and button-mashing. Unfortunately, it also requires quick reflexes, which I'm not so good at.


Overall, I've been enjoying TW3 a lot, while also feeling nostalgic for Inquisition. I suspect that I might finally make my third, possibly canonical run through of that game once I wrap up Wild Hunt (possibly sometime in 2018).

Not too much to show so far in the way of screenshots, but I did collect a few photos into a small album covering the start of the game. I don't think there's anything too spoilery in there.
Posted by Christopher Charles Horatio Xavier King III, Esq. at 8:59 PM