First, a bit of bookkeeping: as I keep saying, I've been making my way through the Humble Narrative Bundle, an excellent collection of story-focused video games that I picked up for Mega Cheap a few months ago. I was planning to play & write about all of them. It looks like I might need to take a flyer on Broken Age - I'd made it several hours in, then encountered a nasty hard crash that seems to have corrupted my save files. I'd been enjoying the game, but as with Wasteland 2 I don't think I have the heart to restart.

Fortunately, that's been the sole technical snafu I've run into on any of those games, and that trend continued with Her Story. This is one of a few games in the bundle that I'd heard about prior to picking it up, and I'd been looking forward to playing it. 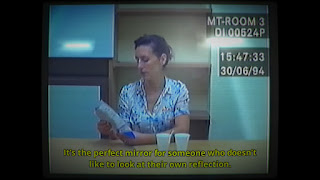 It's great. It's an interesting game that feels at one familiar and unique. Certain aspects of it reminded me of a game I played as a teenager called "In The 1st Degree", another game that used full-motion video to tell an interactive story about a murder investigation. However, Her Story is told from a much greater distance: you aren't interviewing live witnesses, you're reviewing archival footage decades after it was recorded.

As such, at first it doesn't feel all that much like gameplay. You're essentially browsing an archive, not asking questions in real-time to elicit a response. The story itself is fixed in the past and unchangeable. However, I quickly got over this, and realized that I was really role-playing as the investigator, making decisions about how to dig and making connections that would open up new topics.

As you watch each video clip, you learn a tiny bit more about the story. This gives you more hooks and lines of inquiry, which gradually and organically fan out. It's one of the most kaleidoscopic experiences I've had playing a video game, which is really cool... the closest analogue (heh) I can think of are Christine Love's games, although Her Story is even less linear, and feels more... formal? Structured?

Gentle reminder not to read the spoilers if you think you might play!

One very pleasant jolt came early on, after I'd seen perhaps a dozen interview segments and realized that Hannah and Eve were two different people. Of course, by that point I'd seen both of them, while thinking they were the same person, and it was cool to mentally rewind and sort out my prior information.

That continues to happen multiple times throughout the game. There are very few actual lies, and you can identify them early on. What's much more common is thinking that you know something, and then later acquiring another piece of information that causes you to realize that you don't actually know what you thought you did.

My favorite example may have come from near the very end of the game (at least for me; the non-linear design means that I had a different experience and path than anyone else). Early on, Eve had talked about how she needed to make sure that "our baby" would still be okay. I had assumed, of course, that "our" was referring to Eve and Simon. However, after realizing that Hannah had planned to incorporate Eve into their household, I then realized that "our" was actually referring to Eve and Hannah. It's the child that Hannah wanted, the child that Eve would bear, and they were working together to ensure its safety. 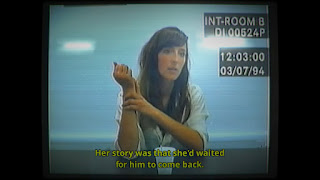 It was shortly after then that I wrapped up my active lines of inquiry and ended the game. I found that some doubts still lingered, though. Did Hannah and Eve still impersonate one another? If so, was it possible that some of the interviews might have been held with the other twin?

Those doubts grew at the very end - in contrast with the video-searching interface that had made up the entire game up until then, there's a very brief IM conversation in which you type yes/no answers to a couple of questions. This includes a bombshell: You are Sarah, the child of Eve and Simon. The final question is, "Do you understand why your mother did what she did?"

Well... I thought that I had understood why Eve did what she did, and why Hannah did what she did, but the fact that I was Eve's child suddenly threw all that into doubt. Why was he asking me about Eve instead of about Hannah? After all, Hannah was the one who murdered Simon. Does this mean that they had switched identities again and Eve (as Hannah) had entered prison? But that doesn't make sense; she was pregnant, and you can't swap out a baby. Or is it possible that Eve really did kill Simon, and lied about it? Possible, but not very likely... I can't see what reason she would have for getting rid of him, and it doesn't make much dramatic sense within the context of the game.

The best guess I have now is that at some point Hannah adopted Sarah. Perhaps Hannah never went to prison: Eve's testimony is damning, but might not have been sufficient to convict, especially if she renounced it in court. Eve herself seems to have been ambivalent about keeping the baby, so she may have decided to share Sarah in the same way they shared so many other things. So, as we play as Sarah, we might not only be finding out what happened to our father, but also learning the true identity of our biological mother.

In accordance with tradition, here's an album, though it's simultaneously too short and full of too many spoilers.

The game is terrific, and makes me really curious just how they managed to design it. There's a fairly simple interface: you type in a keyword, and get up to 5 video clips back. If there are more than 5 total results, you can see how many there are, but will only see the first 5. So, in order to discover more information, you need to switch to different keywords or combine your search terms to narrow down the results.

I guess what impresses me the most was how much narrative coherence the story had, considering that you're essentially browsing the Internet. You can learn really key pieces of information in certain videos, but I somehow seemed to stumble across those search terms at logical and dramatically satisfying moments. I don't think there's anything stopping someone from searching for the "right" term near the very beginning and quickly getting to the heart of the story, but somehow, the design of the game gently guides you along this incredibly organic-feeling journey to get there. Anyways, even just on a technical level, I'd love to see what diagrams or structure they would use to plan this sort of experience.

And, heck, there's a good chance that I'm still missing something pretty big! Judging from the Steam achievements, I've actually only seen slightly over half of the video clips available in the game. I feel like I've gotten "her story," but I may still be missing out on some significant aspects of it. I'm not sure yet whether I'll dive back in again or not. A big part of me wants to know all the things and uncover every last bit of mystery. Another part of me enjoys the lingering ambiguities and the bespoke version of the story I've ended up with. No matter what, though, it's been one of the more memorable experiences I've had in a video game.
Posted by Christopher Charles Horatio Xavier King III, Esq. at 11:22 PM