Another quick check-in: I finished Secondhand Souls, and it was good! 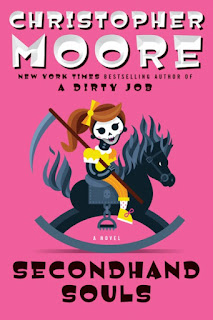 This is a straight sequel to A Dirty Job, which was published eight years earlier but I read only a few weeks previously. Like most of Moore’s sequels, it’s very well-constructed, delivering more of the best elements of the previous book while adding in some fresh surprises and zaniness. Given the San Francisco setting of A Dirty Job, I was really eager to drop back in for more.

San Francisco continues to be amazing. This entry felt a tad less grounded than A Dirty Job, which soaked in the atmosphere of the Mission and the northeast neighborhoods. This one technically is set in many of the old locations, but mostly in interior areas and private lives, and doesn’t soak up the street-level atmosphere quite as much. There are new marquee locations, like Fort Point and the Golden Gate Bridge, that are handled really well and with a great understanding for local flavor and mechanics. (One great detail: the taxi driver who double-checks whether a passenger wants to actually be dropped off ON the Golden Gate Bridge, warning that it will require a U-Turn in Marin and a surcharge, and the subsequent frustration at actually getting to the bridge from the visitor’s area.)

Almost every character from the earlier book puts in another appearance here, although many roles shrink and fade. The Emperor was already pretty minor in the first book, but his appearance is purely tokenary this time around, and the dogs don’t get any action. Jane was a fantastically vibrant character in A Dirty Job; she’s still funny and periodically filthy here, but doesn’t shine as brightly in her newly domestic role.

Fortunately, there are new characters who help bring up the energy. My favorite may have been the banshee; she doesn’t get all that much to do, but was hilarious any time she popped up. Wiggly Charlie was great as well, and unexpectedly tender at times.

I winced a little at some of the jive-talking of Minty Fresh and Lemon Fresh. It’s lampshaded fairly well within the text - Minty gives Charlie the cold shoulder any time he tries to show how hip he is by indulging in ebonic slang, and I read this as Moore poking fun at himself.

For all the buildup of the story, the actual climax comes and goes surprisingly quickly, but still felt satisfying. It’s kind of an interesting combination of hitting the reset button (forces of darkness defeated, heroes out of danger) and turning the page (a new order of souls, no more soul merchants). That suits me just fine. It leaves tons of opportunity for a potential third book, while also ensuring that it will add a unique turn on the series’ ongoing concern about death and spirituality.

This is definitely worth a pick-up for a fan of Moore, though only after reading A Dirty Job. It confirms the enjoyable elements from the earlier novel while telling an engaging new story.
Posted by Christopher Charles Horatio Xavier King III, Esq. at 12:25 PM