I have finally succeeded in my long-running quest to "find another book like The Steerswoman's Road". I've previously found other good books, but Hellspark is the first one that has satisfied my particular craving for a certain type of story: humanistic, adventurous, creative, drawing real drama and excitement from the advancement of knowledge instead of just focusing on conflicts. 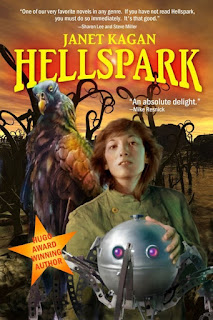 This book does many things, but its biggest interest is with language, and I think it probably has the most interesting, in-depth treatment of language of any novel I've read. The one other contender is Anathem, which is more concerned about the evolution of a single language over time; Hellspark goes back to first principles, looking at the fundamental elements of a language and, more significantly, how language is tied to culture, and how translation is a matter of cultural exchange at least as much as a deciphering process.

Hellspark is straight-up science fiction, set in a galaxy filled with various races, homeworlds, and institutions. One problem that any such sci-fi setting needs to solve is how these aliens will communicate with one another. Typically this is handled with a "universal translator" or "common tongue" or something similar: a little bit of hand-waving that establishes that each of these different species have evolved with their own unique native language, but technology is able to allow everyone to understand everyone else.

Janet Kagan isn't having any of that. Even here on Earth, the same words and gestures can carry radically different meanings in different countries. Does extending two fingers in a V symbolize "Peace," "Victory," or an obscenity? Does "quite" mean "very" or "not"? Anyone who has learned a foreign language has found with chagrin that idioms do not carry across, and politeness does not just require uttering the requisite syllables, but learning and adopting the local customs: that might require voice modulations, or a certain type of eye contact, or accompanying gestures. And we are all homo sapiens who have grown up on the same planet! Just imagine how much more difficult such exchange would be for truly alien species from diverse solar systems!

The Hellspark universe reminds me a little of the Federation in Star Trek, with general comity between the various intelligent races, common mores and traditions that cover their interaction, and a legal framework for conducting business and resolving disputes. Among other things, they have developed a new artificial language called GalLing. (I suspect this is an abbreviation for Galactic Lingo.) It's a sort of lowest-common-denominator language, consisting only of phonemes that every known race is capable of producing. Because it's a second language to everyone, it doesn't come freighted with the cultural overtones and baggage of every other language. And so, even if two different people each speak one another's language, they'll often choose to converse in GalLing, since it drastically lowers the risk that they'll accidentally cause offense.

One of the major exceptions is Tocohl Susumo, the fantastic protagonist of the novel (who has some great Rowan-like characteristics). She is a Hellspark, a culture that's primarily oriented around trading; as such, they are uniquely focused on learning every other culture's language and mores so they can fully engage in trade with them. The Hellspark have their own language, which is kind of an opposite of GalLing: it is sort of a least-common multiple of all other languages, incorporating all of the sounds and acts of other species. That includes aspects like physical proximity and positioning, which are subconscious in most cultures but can carry immense emotional significance. By speaking everyone else's language all the time, the Hellspark are particularly adept at interacting with the rest of the galaxy.

This book is nearly thirty years old, but reading about cross-cultural interactions reminded me of the recent debate over trigger warnings and safe spaces. In the galactic consensus, it's expected that those who initiate a conversation will proactively humble themselves, using a language that the other party will understand (which may be GalLing, their native tongue, or some other language that both parties know), and, more importantly, observing the taboos of the other culture. That often means modifying behavior or avoiding certain constructions; for example, you would never ever call a Jenji a liar, or tell an Yn your real name. This isn't an arbitrary custom or a way to make people feel good about themselves: it's simply a good procedure to ensure that everyone is able to participate in the exchange.

I'm not sure if Kagan wrote any other novels set in this universe, but I was really impressed at her world-building here. I've noticed that, in most sci-fi or fantasy franchises that include a variety of cultures/races/nations, the first entry will have an assortment of characters, often one from each source, and each will, in retrospect, be a typical exemplar of that culture. So, in Dragon Age, Sten is an archetypal Qunari, Leliana a definitive Orlesian, Isabela the quintessential Rivaini, and so on; in Star Trek, Spock is a representative Vulcan, Worf a representative Klingon, and so on. In later entries, they may eventually introduce additional characters who vary from or rebel against the established norm. Hellspark more or less follows that trend, but I was really happy to see exceptions called out. For example, we only meet one Yn, layli-layli calulan, but Tocohl and Maggy explicitly point out that she is untypical for her culture. There's still a lot that they can assume about her actions and thoughts based on her background, but she is more of a wild card and less predictable than the rest of the survey team due to her status as an outlier. Anyways, that felt realistic to me - most people will generally fit within their cultural parameters, but not everyone does, and those variations make the universe feel broader and realer, even if we aren't yet intimately familiar with the standards they're rebelling against.

The novel employs a surprisingly large cast of characters, all the more impressive since everyone has such a distinct name, style of speech, and personal characteristics. Tocohl and Alfvaen get the most page time and are most vividly drawn, but there's a very deep and solid bench. My overall favorite supporting character was Om im, who claims a position as Tocohl's bodyguard, and has a fantastic sense of humor that infuses everything he does and elevates all of his interactions with others. He's a short, quippy, bright guy who you always want to cheer on. Buntec was another character I loved: her cocky talent and delightfully profane mode of speaking were always a joy. I particularly enjoyed her relationship with Edge-of-Dark. They are practically foes at the opening, but after Tocohl's clever interventions, they find a way to grow close; it's emotionally affecting, even more so once their bond becomes strong enough for each of them to embrace the very features that once drove them apart.

Okay, but my real favorite character is probably Maggy, the artificial intelligence. Kagan does such a great job at portraying her as child-like, with all the best aspects that implies: curious, optimistic, eager, sometimes impatient. She's still believable, with Tocohl's explanation of her core programming and vast memory banks. (As a side note, though, one amusing artifact of this book being written in the 1980s is the frequent use of "tape" as a verb meaning "to record".) You really come to cheer for her, more than probably any other character, as she becomes forced to act independently, relying on all of her prior experiences with Tocohl but making her own decisions on how to proceed.

Overall, the investigation for sapient life on Lassti is probably the "A" plot of the book, while the story of Maggy's evolution is the "B" plot. Relegated to near the bottom is the mystery angle, determining who or what killed Oloitokitok and dealing with a dangerous plot threatening the survey team. It's well-written, but I'm really glad that it isn't the main plot. It's so refreshing to have the story be primarily driven by curiosity and diplomacy rather than revenge. The scenes where Tocohl finally cracks the secret of the Sprookje's language, leading up to the final exchange of gifts and development of pidgin, are some of the most joyous things I've read. It awakens a hunger in me to seek out more.

Sadly, Janet Kagan passed away a few years ago. She doesn't seem to have been especially prolific, but her other works have also been well-reviewed and I'm strongly tempted to check them out. I was surprised to see that one of the few other books she wrote was Uhura's Song, a Star Trek novel. That seems a little silly, but also kind of perfect: in retrospect, Hellspark reminded me of the best of Star Trek: The Next Generation and its values: peace, negotiation, diplomacy, science, culture, creativity, knowledge, love. More of this science fiction, please!
Posted by Christopher Charles Horatio Xavier King III, Esq. at 7:07 AM