This is highly unorthodox for the blog, but Life Is Strange has been nominated for a Steam Award, which gives me an excuse to (a) urge my dozens of readers to vote for it, and (b) sneak in yet another post about this game before the end of the year.

The category, appropriately enough, is "I'm Not Crying, There's Something In My Eye". Voting is restricted to Wednesday, December 28, so please do your civic duty!


I don't think I've mentioned this before, but Episode 1 (of 5) is free on Steam, so if you haven't played it yet, this is a great time to check it out! The first episode isn't quite as amazing as the later ones, but it still gets off to a nice start, introducing the characters and the fantastic atmosphere. And, the remaining episodes are a crazy 75% off for the remainder of the Steam Sale (through January 1st), meaning you can pick up the whole series for five bucks. (Also in Steam sale news: all of the HBS Shadowrun games are 75%+ off.) 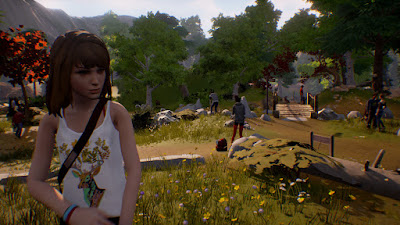 Also, I wanted to share something I found online: the Life is Strange Lake Level. Created by a fan named Sbel02, it's a lovely little bit of non-canon content. It doesn't have any real gameplay, but is a wonderful opportunity to relax, wander, and see old friends again. You can download it here (Windows only, about half a gigabyte big). I even made an album for it!
Posted by Christopher Charles Horatio Xavier King III, Esq. at 11:04 AM